Bus plunges into ravine in Brazil, at least 18 killed 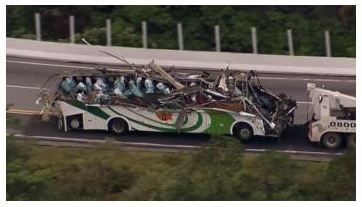 A bus lost control and plunged into a ravine in Brazil’s Sao Paulo state Wednesday night, killing at least 18 people and injuring 28, most of them students, authorities said.

The accident happened about 120 kilometers (75 miles) from the country’s economic capital when the driver lost control of the bus carrying 46 passengers and crashed into a rock in the opposite lane.

The impact caused the vehicle to overturn and fall into a ravine, rescue services said.

The driver was among the dead, several media outlets reported.

The students were from three schools in the town of Mogi das Cruzes and were headed to the coastal town of Sao Sebastiao in foggy conditions, according to the Globo G1 news network.

About 43,000 people die each year on Brazil’s roads, with accidents surging by 24 percent between 2002 and 2012. Before the country’s economic boom cooled about 10,000 new cars took to the roads each day.

One of the deadliest accidents happened in March 2015 when 54 people died after the bus they were traveling on to a religious event failed to negotiate a curve and fell 400 meters (more than 1,300 feet) down a steep bank in the southeastern state of Santa Catarina.