Chemistry teacher careless when the experiment, the class burst 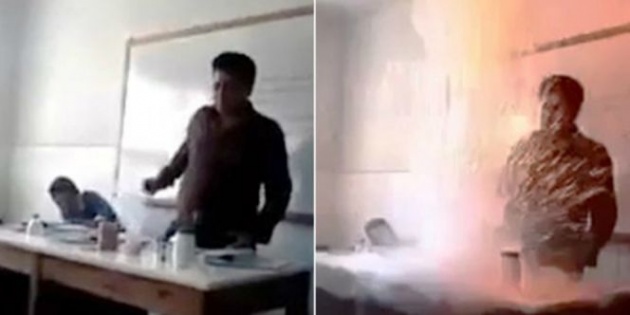 This is a warning for teachers and students. Be careful in doing experiments. Especially when mixing elements in chemistry lessons. If not careful, it might crash.

As in Cairo, Egypt. An explosion occurred in the classroom when the teacher of chemistry, Ahmed Gabr (38) conducted experiments oksihidrogen gas in front of his students.

Initially, the teacher pouring the liquid into a glass placed on the table. Some students look around the table, and even take video footage.

After the teacher pouring the liquid, it looks smoky glass. And a few moments later .... bam .... there was an explosion. Sparks flew from the glass.

Cash only the class was becoming frantic. They were shouting. The students were also run helter-skelter, berhambur outside the classroom.

It is not known whether there were any casualties in this incident. Clearly, after that the parents hit tables blasted school teacher. Video event was also the topic of social media user Egypt. They denounced the dangerous master.

Day 1 on bitlanders: the experiment begins

Hibitlanders :) Welcome to my very first blog post on bitlanders. My name is "dignity" (no it's not …

What happens when 10,000 firecrackers explode?

The Thing In The Gas Mask

This may be the single-scariest photo I ever took. It is simply a friend called Lewis wearing a gas …