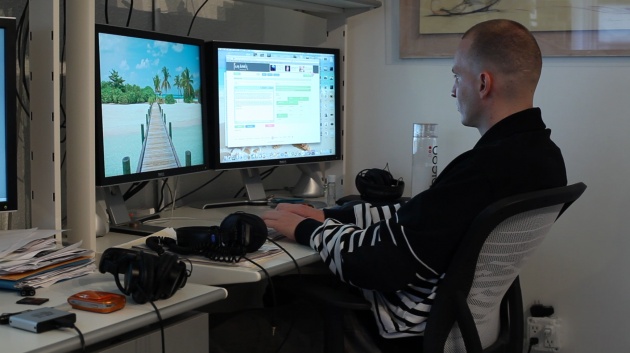 Closing my Saturday evening off with a blog that was inspired while shooting an interview with two of my fellow Marines Luke Deer and Cody Wilson  (G.I.V.E.)'s me the gratifying feeling of doing a job well done for the day.  This time last year myself and these fellow  Marines were four months into a deployment where seeing the next day was sometimes surprising.  This is where my computer work started with learning to send emails, once internet was established at our patrol bases, to keep family notified that I was doing well and still healthy.  Sending emails via yahoo and facebook was the extent of my computer knowledge!

With the mentorship from CEO of Filmannex, Francesco Rulli and other filmannex videographers, I have been part of and am currently learning the trades of this studio day by day. Global Initiative for veteran entreprenuership is doing its job to its full potential.  Upgrading day by day from my education on social networking limited to emails, I'm now capable of producing successful blogs, and filming my own interviews to add to my fellow Marines webtvs using all the same profesional equipment used in the Filmannex studio to film their own interviews.

My future plans with (G.I.V.E) and for other veterans that take part in the project consists of getting more and more involved with the Afghan developement project especially with the helping of  building  schools in Afghanistan.  With the first steps by Filmannex being taken with establishing internet points within Herat schools I sometimes think once I have a solid foundation to stand on with the trades I've been mentored in, who better to teach than Afghans with dreams of becoming what I could teach them.  Not only would the educational system in Afghanistan benefit from (G.I.V.E.) but also Afghanistan's own entreprenuers who are ready and willing to learn the trades of a successful film studio.  I am sure their are many Afghans who are proud of their culture and would love to show the beauties and strength of their culture that is overlooked by so many because of the war.

"Some people spend an entire lifetime wondering if they've made a difference in the world, Marines don't have that problem!"  I read this quote often quoted by Ronald Reagan and do have it memorized.  Alot of me wants to continue fighting for our counrty, well not alot most of me does, but my time has come to put my guns down and help rebuild a countries people, mostly their children so their children never have to see the horrors I have seen.  As I see myself and what I've become, a proud infantry combat Marine turning into a well mannered successful businessman, I see the same for not only the economy of Afganistan but for its people, very proud combat veterans of their own wars, turning their country into everything it can be. I have great faith in (G.I.V.E), and the Afghan developement project, within the next ten years I know for myself, any veteran affiliated with (G.I.V.E.), as well as the many Afghans who's lives have changed, a very sincere thank you will be provided to Francesco Rulli and Filmannex. Semper Fi!