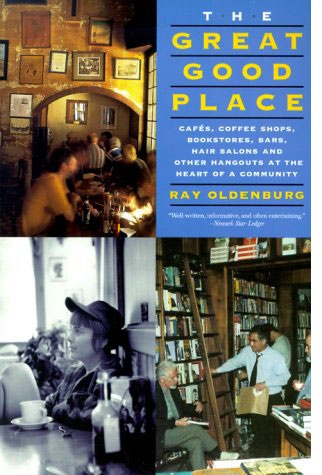 OK, in an effort to prove that we're not just two pretty faces in search of cheap drinks... well, perhaps in addition to proving that, we’ve decided to contact some of the authors who have inspired and amused us. Here is the fantastic first installment; we hope it will be one of many. We had the distinct pleasure of getting in touch with Dr. Ray Oldenburg, the author of THE GREAT GOOD PLACE (and his follow up, CELEBRATING THE THIRD PLACE: (INSPIRING STORIES ABOUT THE "GREAT GOOD PLACES” AT THE HEART OF OUR COMMUNITIES), books that inspire as we make our way from tavern to pub to inn and back. Dr. Oldenburg coined the phrase "third place", his argument being that we all need a place other than our (1) home and (2) work, where we can escape responsibilities and expectations (see the Pub Culture blog for more on that). His works obviously have touched a nerve. And in our first ever blog interview, Dr. Oldenburg graciously agreed to answer a few of our questions. HH: In THE GREAT GOOD PLACE, you address why establishments that serve drinks (pubs, taverns and the like) have "unique potential" to become third places. For our readers, can you elaborate on that a bit? Dr. O: Apart from what I outlined in the book, the drinking/talking synergism, there is a greater expectation that one will converse while in a bar. Drink coffee alone and no one notices. Drink alcohol alone and some eyebrows are raised..."Why did he come in here?" The conversational buzz in barrooms is typically greater than in other third places and laughter more frequent. It's not all booze...it's atmosphere too. HH: Have your travels taken you to any such places of that kind that you have found especially memorable ? Dr. O: Memorable places. The Pickwick in my wife's hometown (Duluth MN), Old Ebbitt's Grill in DC. Le Mans bar in Angouleme, France. An "English pub" in Osaka, Japan. The Hotel Bar in Menomonie WI. Horror of horrors, I (nearly) neglected to cite the Blue Moon Tavern in Seattle, the favorite haunt of 3 pulitzer prize winners, island of sanity in troubled times, and host to all walks of life. (It's included in CELEBRATING THE THIRD PLACE.) HH: Have you found any in New York City, our home town? Dr. O: I haven't been in your city since 1954. I had a wonderful night in a subterranean tavern on Third Avenue. They had a mug from every college/university in the U.S. and a very nice lady took pity on us GI's and bought several rounds. Can't recall the name of the place. HH: New York is arguably a city that should encourage more personal contact and the creation of third places because it's largely a pedestrian city with numerous distinct neighborhoods; but we've seen many third places disappear in just the last two years only to be replaced by the likes of Applebee's, The Olive Garden, and enormous condominium towers. What can we do, as individuals, to help preserve third places in the face of corporate "development"? DR. O: The corporate colonization of the public realm seems unstoppable. Independent operations can form associations, buy in bulk, and get similar discounts. The mayor of Harrisburg PA gives an award each year to new establishments that help unite the city. It helps to support an independent by picking one for regular meetings of friends. My place responded by making Spaten's Optimator beer available just for me. HH: Is there a town or city that you know of that has been particularly successful in terms of third place creation? DR. O: Who has been successful in creating third places? The state of Wisconsin. Walla Walla, WA, I hear, has done very well. HH: Do you have a personal favorite third place? How long have you been going? What do you value most about it? Dr. O: I frequent a sports bar at 4:00 PM when the sound is off all the TVs and my friends are there. We tip well, I donated La Crosse sticks, give the owner a bottle of home-made coffee liqueur now and then. The cute young things who serve us are very nice having decided we are all over the hill. We've used it for that past 6 years having lost our Italian restaurant to their reduction in serving hours. - In the interest of full disclosure, we'd like it to be known that we have been to the Old Ebbitt Grill in Washington, D.C. and loved it. We've been often. Also, we are big fans of Spaten Optimator. For the foreseeable future, you may want to look for us on Third Ave., hoping to find a subterranean tavern with many collegiate mugs that predates 1954. If it’s possible, we have a deeper respect for Dr. Oldenburg now. We're so grateful that he took the time to answer our questions, and hope you're curious enough to buy one of his books and seek out your own third place. And when you find it...Let us know about it!

Jimmy Ludwig and Mark Aldrich love three things: History, Drinking, and the History of Drinking. Oh, and did we mention Travel? Jimmy and Mark go around the world and through time to discover the most historic and remarkable bars, the best Happy Hours, and the greatest drinking stories ever woven…

The Beer Revolution is in full swing. From brewing innovation, to record sales, to an informed publi…

Have you seen a Tegestologist lately?

Mark the Happy Hour Guy says: "It’s quite likely that you have seen a tegestologist lately, but j…

Do what you will, but can you pass... The Bar Exam? 1. What Spring Street watering hole is rumor…

“This Lemp’s for You.” If fate had played a kinder hand to the once dominant Lemp family brew…

In our endless search to bring you the most interesting aspects of the pub culture and its people, I…