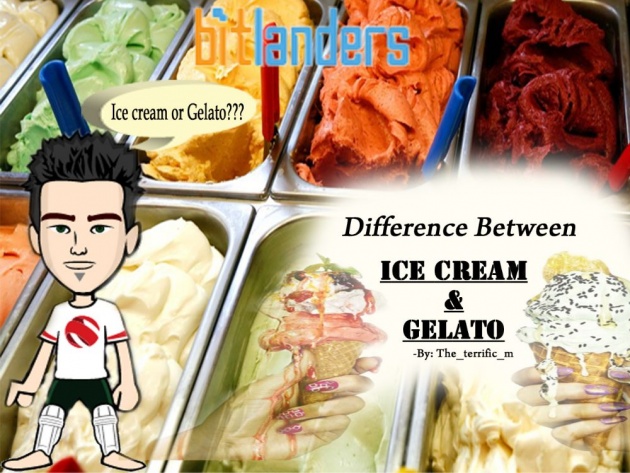 In life, we have experienced different things, different occasions, and different festivals. In fact we have seen some interesting people with their interesting activities, habits and outlooks. For example we have seen people who loves different kind of food whether it's Spanish, Chinese, Asian or Italian food actually it doesn't matter. These are the people who called foodies because their love towards food is constant and infinite. But rather than all these there is ice cream, a frozen dessert loved, liked and ate by almost everyone with people of every age. From children to old age, School boy to an officer etc. It is eaten by everyone with its delicious flavor and taste.

Mainly Ice cream is a collection of different frozen dessert’s usually made from dairy products, such as milk and cream. The word “Ice Cream” is actually derived from earlier iced cream. It contains various varieties in which “Gelato” is very top and popular. But the question arises what is the difference between ice cream and gelato? Which one tastes good? These are the questions which I will answer you later in this blog.

Being a frozen desert lover, we’ll eat most of these no matter what name of they are. You have eaten ice cream several times and maybe you have eaten “Gelato” once by knowing it an ice cream. The chemistry of frozen dessert family is quite amazing like as its history.

In the era of Persian Empire, people would pour grape juice concentrate over snow, in a bowl and eat this as a treat, especially in hot weather. Then Persian moved further and invented a special chilled food which made up of rosewater and vermicelli (a traditional type of pasta) as it was royalty during summer. And after Persians Arab were perhaps the first to use milk as a major product dried fruits and nuts etc. As early as 10th century, the recipe of ice cream became popular and widespread among many of the World’s major cities including Baghdad, Damascus and Cairo. 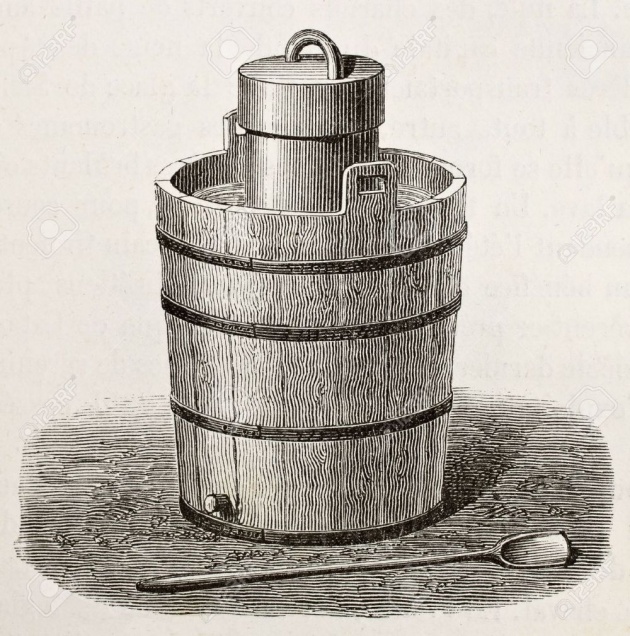 Today, it becomes the most popular and famous recipe of the World. People love it by every means. Some love to eat in hot weather for decreasing their exhaustion while some others eat in cold weather to take fun of coldness and joys. So what do you prefer Gelato or Ice cream? Here are some interesting facts and information about ice cream and gelato which will make you easy to choice anyone. The comparison of Ice cream and Gelato are given below:

As mentioned above Ice cream is a frozen dessert which can be made up of milk, cream, sugar, yogurt etc. The best method for producing ice cream at home is to use an ice cream maker in today’s World. It is an electronic device which turns that churns in into ice cream mixture.

The ingredients used in ice cream are fruits, dry fruits which mixed together into a rich milk, yogurt or custard etc, and then served at a fairly cold temperature that makes bond stronger and easy to hold in a scoop. It’s churned at a fairly high speed to incorporate air to increase its volume. Cheaper the ice cream, greater will be air whipped in it. The result is a fluffy smoothly foam that can easily be scoped. 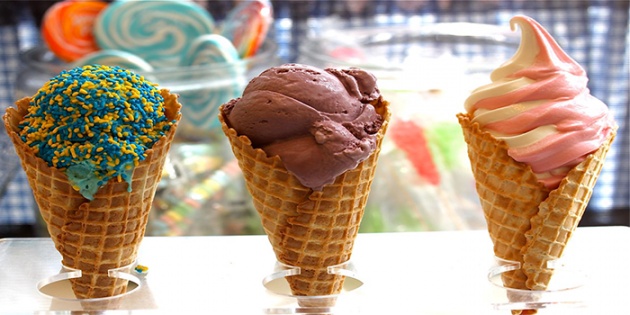 Before the invention of refrigeration, ice cream used to reserve for a special occasions, while having no such electrical device that turns mixture or liquid into ice through electrical energy like today (refrigerator). Ice was cut from lakes, ponds, mountains, icebergs during the winter season and stored it in the ground by making holes in it, or in wood frames, or brick ice houses or insulated by straw and metal ice boxes.

In addition to make ice cream more delicious we can also add various flavors such as strawberry, pista, kulfa, for making it wonderful.

Ice cream contains more than 10% milk fat and usually between 10% to 16% fat in some premium ice creams. 9% to 12% serum solids, which contains carbohydrates and proteins found in the milk. The level of water in ice cream is 55% to 64% which comes from the milk and other ingredients.

The word "Gelato" comes from the Latin word "gelatus". It is the Italian word of ice cream. It is commonly used to refer the varieties of ice cream. Gelato is made with the help of large amount of milk and small amount of eggs, fruits etc. Like an ice cream, it can also be made with milk, cream, various sugars, and flavors such as dry fruit, strawberry etc. In comparison with ice cream, it is lower in calories, sugar and by other method and styles.

The mixture of gelato is usually prepared by using a hot process first to dissolve sugar while mixture needs to be heated at 85©. The hot process to make chocolate gelato is same for the process of making an ice cream. Gelato is dense and intense whereas ice cream is fat, smoothly and fluffy. Gelato incorporates less air which makes it denser than ice cream. As gelato prepared through hot process, so it is served at slightly warmer temperature than ice cream. So far this purpose its surface remains concentrates, silkier and softer because it has a lower percentage of fats. Also it contains lower carbohydrate and proteins than that of ice cream. It is produced in small batches following the traditional Italian method. As it is lesser in fats than ice cream, it doesn't mean that less fats means less taste, but it would be more healthy and flavorful. 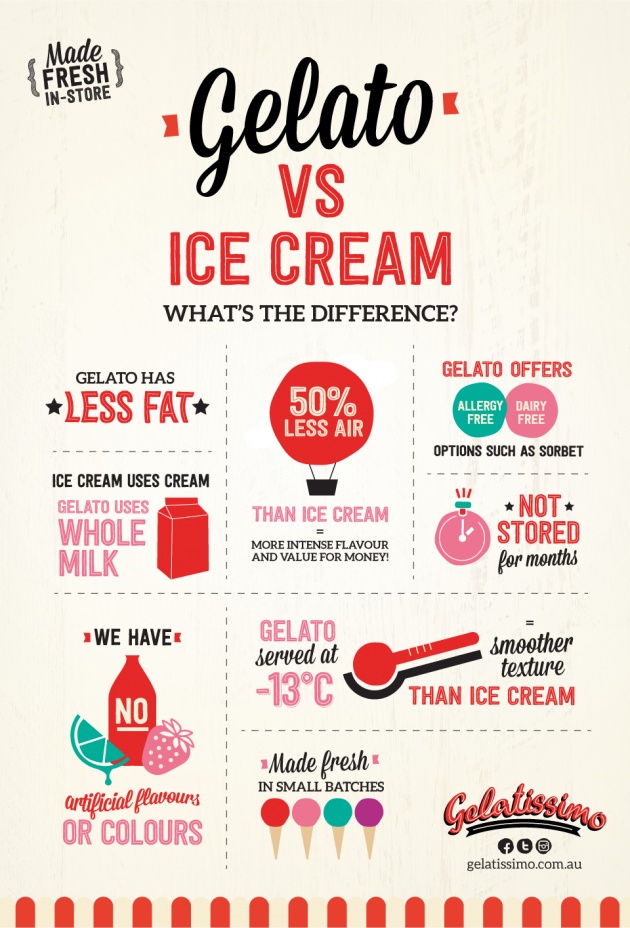 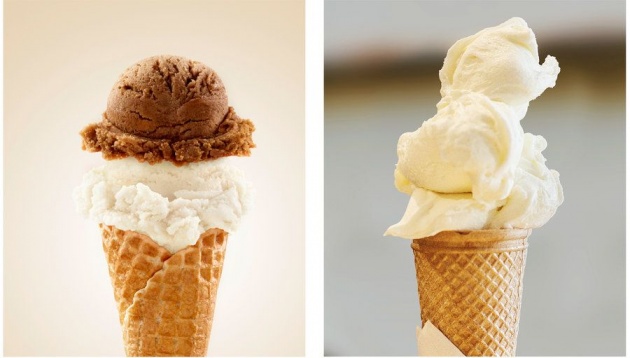 Now it is slightly difficult for you to choose one of these, as far as I am concerned, I love both ice cream and gelato and had an experience to eat often times as they both provide a taste of sensation. But sometimes I need to give preference to only one. It’s now up to you to eat whatever you like, taste whatever suits you, and it’s a reality that the World of frozen dessert is amazing, tasty, sensational and delicious as well. So keep enjoy your life with ice cream or gelato and make your moment healthier, sweetener than previous one’s as possible as you can. The Hershey Creamery Company was founded in 1894 by Jacob Hershey and his four brothers: Isaac, Pari…