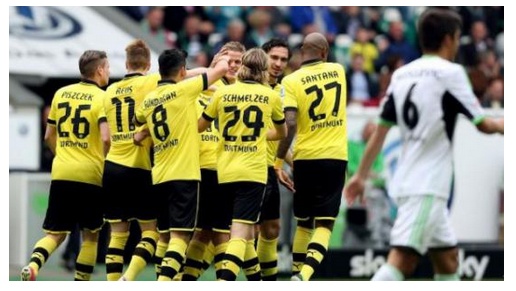 Borussia Dortmund aim to win this season’s German Cup to keep alive their hopes of European competition next season ahead of Tuesday’s quarter-final against Hoffenheim.

Dortmund host Hoffenheim while Wolfsburg are home to Freiburg on Tuesday, then holders Bayern are at Bayer Leverkusen on Wednesday as second-division Arminia Bielefeld host Borussia Moenchengladbach in the rounds only non-Bundesliga tie.

Borussia’s 1-0 league defeat at home to Bayern on Saturday left them tenth in the table and effectively ended their hopes of a fifth year in the Champions League next season.

Jurgen Klopp’s side are now 15 points from qualifying with a top four finish following a dire set of results earlier in the season which left them bottom of the Bundesliga in February.

But the 2012 German Cup winners could yet claim a Europa League berth, either by winning this year’s final at Berlin’s Olympic Stadium or a top six finish in the Bundesliga table.

“The cup game is now very important for us. Going to Berlin is still a major goal for the season,” said Dortmund’s director of sport Michael Zorc.

“And although it is still far away, it is of course a way to get back into international competition.”

Dortmund have to rediscover their scoring touch at home after failing to claim a single goal in any of their last three games at Borussia’s Westfalenstadion in all competitions.

“We can give ourselves a big boost for the rest of the season with a good result and performance against Hoffenheim,” said Germany midfielder Sven Bender.

But Dortmund will need to improve on their Bayern defeat which left captain Mats Hummels ruing their “inefficiency” after failing to convert their 15 chances as Bayern’s ex-Dortmund striker Robert Lewandowski headed the winner against his former club.

Holders Bayern have fresh injury woes for the key tie of the round in Leverkusen with Germany star Bastian Schweinsteiger the latest on their casualty list.

An injury to his left ankle saw Germany’s captain hobbled out of Saturday’s 1-0 win at Dortmund.

But Pep Guardiola’s Bavarian giants welcomed back Spain midfielder Thiago Alcantara for the last 20 minutes in Dortmund after a year out with injury.

The German Cup semi-finals will be played on April 28 and 29 with the final in Berlin on Saturday, May 30.