I'm not really a movie kinda gal. I don't watch a lot of movies--and I have never made a movie review before. But, there's always a first time. So when I learn about the 'contest' hosted by micky-the-slanted-salerno, I thought why not give it a try? Yes, I just found out about it. I know! What rock have I been hiding these past few weeks? I should have known though since many bitLander users are doing movie reviews for the same movies. So today, I'm taking a break from my usual niche and giving movie reviews a try.

But, before I start, I must give those of you who haven't seen (and still wish to see) the movie Enchanted fair warning. This movie review is full of spoilers. 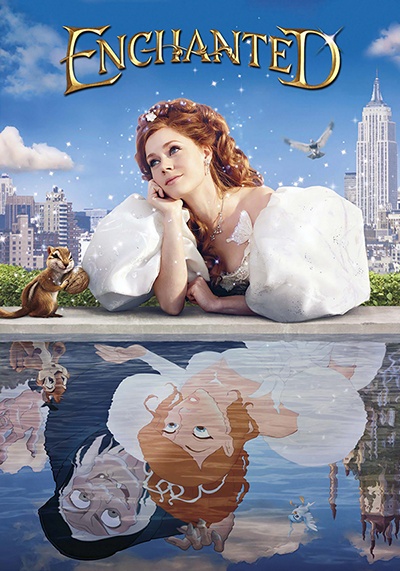 Quick Synopsis of the Movie

Once upon a time in the enchantingly animated kingdom of Andalasia, there lived a girl named Giselle. Giselle is your typical fairytale princess who loves to sing, talks to animals, and waits for her prince charming all day long. One day, Prince Edward stumbles upon her. They fall in love at first sight (naturally!) and decided to marry the next day--talk about the fastest wedding preparation ever! But Prince Edward's evil stepmom, who wants the kingdom for herself, will have none of it. So, she hatched a nefarious plan to get rid of the would-be-princess for good. And what better way than to banish her to the non-animated and disenchanted, modern-day New York City? 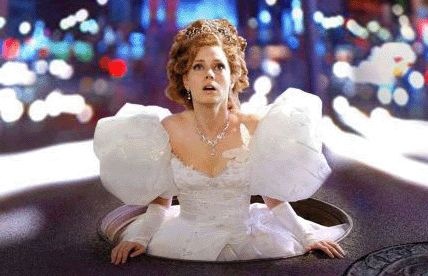 Confused and scared of the chaotic world she now finds herself in, she befriends Morgan Philip, the 6-year-old daughter of a cynical divorce lawyer, Robert Philip. At first, Robert thinks she's a weirdo. Well, in fairness to Robert, Giselle has a habit of spontaneously singing at random moments. But her fairytale-like charm is also what captured his heart. And, soon romance starts brewing between the two. 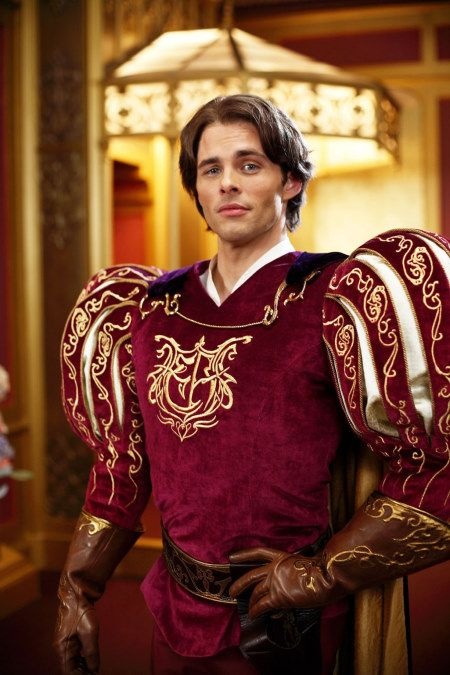 Meanwhile, lovestruck Prince Edwards followed Giselle to New York City, intending to save her--and his own misadventures in this unfamiliar land start as well. Unbeknownst to everyone, Queen Narissa is hatching another plan in response to her stepson's actions. She tried to poison Giselle multiple times with the help of her baffling buffoon of a sidekick, Nathaniel, who couldn't get the job done. So, she finally decided to take matters into her own hands. 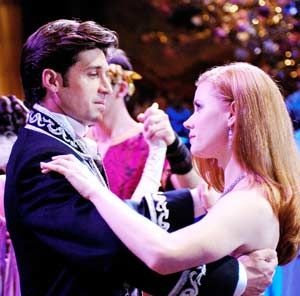 During a ball attended by everyone, Queen Narissa disguised herself as an old hag and tricked Giselle to take a bite of a poisoned apple--putting her in a death-like slumber. Only a true love's kiss can break the spell. Of course, it was Robert's kiss that woke her which convinced Prince Edward and Nancy Tremaine--who was dating Robert at the time--how much the two love each other.  However, this also made the evil queen spitting mad. So mad that she transformed into a dragon and kidnapped Robert whom Giselle rescued. So you could think that there was a turn of events where it was the princess who saved the prince's life.

So, to end the story. Prince Edward and Nancy went back to Andalasia--to get married!  Nathaniel writes a bestseller accounting all his hardships and personal struggles. And finally, Giselle started her own clothing line and lives with her new family--Robert and Morgan--happily ever after.

I know. There are huge holes in my summary. I never said I'm a very good storyteller, did I? Also, you can take that as a chance to see the movie so you'll know the whole story.

Moral of the Story

While the movie may seem silly to most people, it does have many valuable lessons we can learn from. I admit that I am a Disney baby and I have watched all of those classic Disney Princesses movies--but the ones that always stood out for me were the ones where the princesses are not wimps and pushovers who do nothing but wait for their prince to rescue them. Take, for example, Ariel from The Little Mermaid, Mulan, Anna and Elsa from Frozen, Merida, and so much more. So, it's really no wonder that I really liked Enchanted. Though the main female character started out as your typical, cliche Disney Princess, she grew both in character and fortitude as the story progressed. Actually, everyone (except for the evil queen) grew in character--even Pip, Giselle's chipmunk friend. Each one of them had their own happy ending. I guess the moral of the story is to not conform to what everyone wants you to be. Giselle was regarded as a weirdo with her weird ways--but it was that same weirdness that made her so adorable and charming.

Life doesn't always go as planned. Sometimes, it throws a mean curveball--and we could wallow in self-pity or fight back. Giselle learned how to deal with it and make the most out of her situation and we could all learn from her.

Here are just some of the things I learned from this movie.

And the most important lesson I've learned is not to trust old hags with red apples. I mean--seriously? Doesn't she know Snow White?

While the movie took a modern twist, its soundtrack is still considered as traditional in Disney standards. It is comprised of all the songs sung by the cast which may appeal to the younger viewers than the older ones. However, one song stood out for me--"Ever After" sung by Carrie Underwood. The meaning of the song along with Carrie Underwood's powerful vocal prowess really touched a part of me--so much so that I even used it as my wedding reception entrance song.

But, if I had to choose a song sung by one of the main characters in the movie, then I'd choose this.

Amy Adams did a fantastic job at playing a sweet, adorable, and lovable--but clueless--girl who, in the end, found her own strength so she could finally come out of her own shell. The rest of the cast did equally well. James Marsden was not afraid to act silly and funny. But then again, I guess that's to be expected from someone who played a human who became the next (co) Easter Bunny in the movie "Hop". Susan Sarandon is flawless, as always. And, last but not least, Patrick Dempsey AKA McDreamy. Yes, I am, or at least was, a Grey's Anatomy fan too--until they killed him off. Anyway, Patrick Dempsey is his usual McDreamy self in this movie and I believe he just made a lot of girls who saw this movie swoon--including me.

I'm not a film critic nor do I pretend to be one. I've never rated a movie based on how much I like it before. It's just either, 'I loved it!', 'It was okay', or 'Gads! I hated it!' for me. But for this movie review, I will be giving this movie a rating. I'd give the depth of the story a 6/10 (maybe?) because, no matter how much I liked it, it's no Saving Private Ryan or Argo. Acting-wise I'd give them a 9/10. But, overall, I'd give the movie a 10/10. If it's possible to give them an 11/10, I'd do so. I know I said that the storyline isn't very deep but I'm not really a fan of those kinds of movies. I watch movies to destress and have fun--not to feel more stressed during and after the movie. In fact, doing this movie review made me want to watch it all over again.

How about you? Have you seen the movie Enchanted, yet? What did you think about it? Let me know in the comments section below.

Watch the trailer below

If you're not into fairytale movies, what kind of movies do you like?