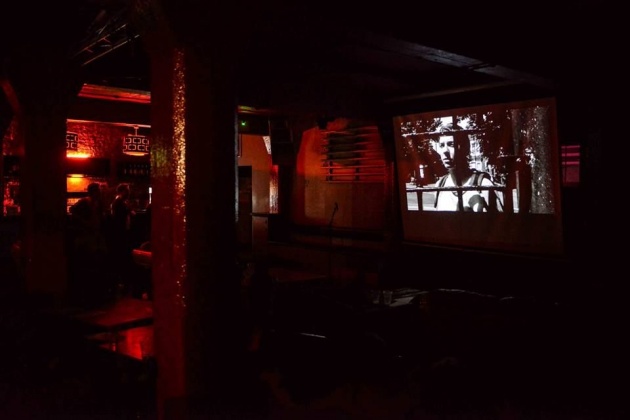 Still attracting packed houses on Thursday nights - Europa League, what’s that? – Shorts On Tap showcases thematically-based short film programmes for discerning visitors to East London. Earlier this year, founder and animal rights activist - if his Facebook feed is anything to go by - Filippo Polesel held the event in Japan. Perhaps now he needs to tour the country, if there are any willing venues in Birmingham, Manchester and Liverpool. Perhaps even a simulcast.

The ‘All in the family’ programme consisted of seven shorts focusing on domestic discord. The first, Dylan’s Room, written and directed by Layke Anderson, featured a mother (Joanna Scanlan), cleaning out her (possibly late) son’s room and, after finding his ‘waccy baccy’ sharing a spliff [joint] and an imaginary conversation with him. The room itself is fantastically impressive, with its high ceilings and higher windows. The camera focuses on books (‘Brave New World’) and posters (‘soma’) and a map of the world. It is about parents being unable to protect their children, but doesn’t have a sting or emotional impact. Nevertheless, the image of Scanlan curled up on a giant bed stays with you.

Rukhsati (Farewell), directed by Khurum Khan explored the heartbreak when a daughter leaves her father’s home for the last time. The nursing of papa back to health, a stare out to sea, a ride on a steam train and final preparations for a wedding precede a tearful embrace. It positively exploded with production values. The film described this as a natural process. There is no plot twist, only an honest mirror to the experience of many Asian women.

Projected in black and white, Christian Gordon’s The Man was a stylized drama in which a member of the family may – or may not – be dead. A man sits with his back to the camera. A smartly dressed woman brings him a cup of tea and deposits lumps of sugar – the third one got a laugh – into it. She puts a hand on his shoulder. The man slowly stirs the tea. The camera tracks back to reveal the woman nursing a figure on the floor. The stirring gets more vigorous. Children greet the man. A woman reads to them. The stirring continues. I didn’t quite get it from the mise-en-scene but it is supposed to be set in the 1960s. Mr Gordon forgot one prop – the pipe. Petula Clark provides chaser music.

The Void Between Us directed by Miguel Pinho is nominally a short about a father’s unemployment taking its toll on a marriage. The husband refuses to entertain any notion of getting a job and finally explodes at his wife, who flees from him. I interpreted it as describing mental illness. The husband never explains why he lost his job and he’s not interesting in manual labour. His wife wants to get a house in the city. The husband had some sort of breakdown, for which he refuses medical treatment (because that means a label). So the real subject is the difficulty people have in reconciling themselves to a deterioration – or failure – in their mental health. An important subject - powerfully conveyed.

When an audience member re-ignited their electronic cigarette for the umpteenth time in front of me – just because it’s electronic doesn’t mean it is pleasant for others – I was forced to leave my seat for the next film, Cosmos. The irony was that the smoker was one of the producers of a film about forcible evictions in Soho. My apologies go to director João Paulo Simões. I think his film was about a woman who prostitutes herself to send money to a family member.

I’m a sucker for films that try to make me laugh, so kudos to Carlo Ortu for Pretty Things, a comedy about an old man who decides to elicit a hug from his granddaughter through an extreme declaration. This isn’t what his friend had in mind. Equally humorous was the final movie on the bill, Amy, in which the title character (played by Zoe Lister) wakes up her new boyfriend’s mother’s bed and receives some enthusiastic visitors who make her re-think her brief moment of bliss. Good performances, confident direction and not to be confused with Asif Kapadia’s documentary of the same name, director Matt Jamie’s film closed the evening with a smile.