Fictional Story I've made. read at your own discretion.

I am not used to construct a good sentence using English language, however I will try my utmost. If you are reading this thank you.

This story is entirely fictional any resemblance in character, place and event is coincidence.

I was a body guard at a local store, first to six weeks was splendid and piece of cake, I'm so happy that I can provide foods, clothes and shelter with my family, cause no one could escape poverty even the rich people or what so called high-class can end up in something just like the other side of the coin.

Then something unnerving happened to me. Around two thousand three hundred military time I was patrolling at the back of the store, and I saw a young girl, she's like nine to thirteen years old. I asked her. “Hey you what are you doing there?” She didn't responded, me dumbfounded at the sight of this girl or I assume she was a girl, Could not really tell in blackness I switch on my flashlight, however it was flickering damn even though I'm very sure that my flashlight was in a good shape I was using it everyday and check it before past seven standard time.

Approaching the girl with my enjoying light disco flashlight I noticed that she was in the other side of my area, touched my weapon system upon closer look just in case that this person is an accomplice of the real intruder, although just a hunch. At almost we could see each others face, I stumbled and hit my head in the barrel that declare of our distance after I regained my consciousness I saw the wet floor with liquid not sure what kind, and the girl was gone. I went to investigate the place I took one stick of my cigarette light it up, after a long walk consumed all of my remaining energy my flashlight wasn't palpable at the moment I guess that I dropped my flashlight after that whirling I've made.

Few steps need to be taken before I search in the other side of the back store I saw again the girl illuminated by the lights outside of the other building, standing motionless right there I can't explain well because she's completely grungy and lack of appearance, she's wearing dress color unknown, I was definitely stunned by her looks. No words can describe her existence don't know what to do at that time.

I made my way to approach her she didn't seem a sociable person, nevertheless as a body guard this is my duty, I dazed when she pointed something right in front of my eyes. “Is that my flashlight?” I shouted at her. “You scared the shit out of me.” I said. When all is said and done I felt really terrified, then when she was done playing the ray of light that pointed at me was gone accompanied with the sight of her.

After that night I purposely quit, as a body guard along with my resignation paper. My employer said that I don't have the right to leave on purpose made with the contract that I signed, however If I pay the resignation fee I was allowed to. Who made contract like that I said to myself. With my anticipation of fear and horror I happily paid the resignation fee.

Three months later my job now was selling vegetables at the local market and saw the news on the paper proclaimed that the missing only daughter of Mr. and Ms.(Confidential) found in the store I once worked as a body guard, buried at the back of the store the suspect was still at large, the janitor found it after smelling a distinctive odor that was offensively and unpleasant, in his statement with the police. 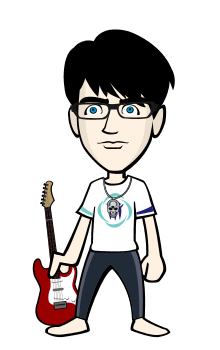 Aspiring Writer & Musician. life is about fulfilling that's missing in your life.