I just finished writing the first part of this blog series featuring top Philippine urban legends for the Halloween. Presented in the previous post were stories of the construction of San Juanico bridge, the lady in Balete Drive, and Robinson's half-snake man. In this part, I will tell you few other popular urban legends in the Philippines which still haunt and scare many Filipinos to this day. 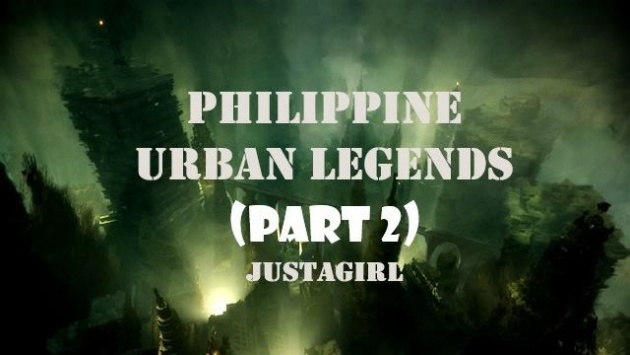 I bet most Filipino fellows here have heard of this urban legend involving cat meat as main ingredient in making siopao. As a kid myself, many elders would often jokingly tell me and my childhood friends that siopao are made of cats. Up until now, I still overhear such stories being told to kids.

According to the tales, the delicious meat stuffed inside the Chinese steamed buns are not from pork or beef, but from cats instead. The story is backed up from the supposed fact that Chinese foods are often made out of alternative food source. 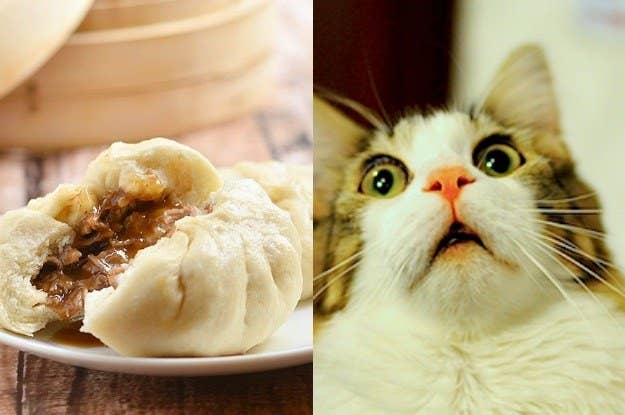 Pork meat can usually be pricey, more so for beef. So, as the story would go, Chinese sellers and businessmen would go for stray cats to further reduce the production cost of siopao. Stray cats from streets are supposedly hauled with no cost, skinned and turned to ground meat.

According to authorities, there is no truth to claims that there are siopao sold that are made from cat meat. In the Philippines, selling cat meat-made foods are not legal and so, to sell cat-meat siopao is not legal too.

As per historians, this urban legend could be seen as Filipinos' view of the Chinese. But then, many people also think this could just be dirty tactics due to market competition.

Disturbing as it may seem, but Filipinos haven't ceased in eating siopao. Most adults, of course, do not believe in such tales.

It is a common horror story that there is a lady hitchhiker who would just suddenly vanish upon getting a ride home. It actually got featured a lot of times during Halloween specials in local TV shows.

According to many stories, a certain lady ghost often roams around the roads at night time. She would suddenly appear whenever an approaching vehicle passes by. This lady will be asking for a ride to her supposed home.

As the driver would agree to let her in and drive her through until her home, the lady sitting at the backseat would just suddenly disappear without notice.

This story has created horror in many towns in the Philippines. Many witnesses to similar incidents say that the lady was caught in an vehicular accident on her way home. This is, apparently, the reason why she haunts vehicles passing by the road, asking them to fetch her home.

However, the fishy part here is that this story is not just common to one town. In fact, this story has been told to happen in many provinces in the Philippines, especially those with long road drives and far away quiet locations. This tale is also popular even in other countries that a book and a movie had been made in its account.

The story is all the same. There is a lady ghost who got in an accident on her way home and would haunt drivers passing by, asking for a free ride. Then all of a sudden, the lady would just disappear.

Up until now, this horror story is still believed by many people. However, others say it is just an invented tale to scare people. What do you think?

This urban legend of a supposedly male infected with HIV goes on a rampage to spread his disease is one of the stories I heard not too long ago. It could be because the topic involved is more sensitive, rather than a typical scary concept for the kids. 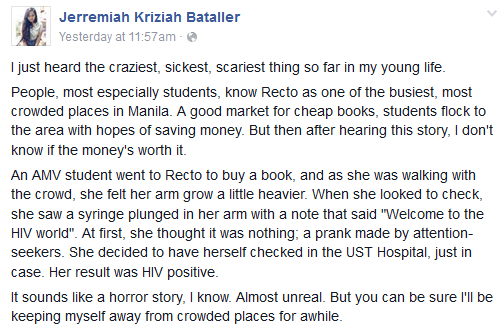 According to a post circulating in Facebook, a woman posted about this story she heard that got her freaked out. As she wrote in the post, there was this particular event that took place in Recto, wherein a lady student buying books got intentionally injected with a syringe in her arm.

There came a little note in the syringe plunged in her arm, saying "welcome to the HIV world". Thinking it was just a bad prank, the said lady didn't bat an eye for a while, but decided later on to seek hospital help. To her horror, the result of the test came out she was already positive with HIV.

As much as this urban legend caused panic to many people, especially women within the area, ot appears like this story is nothing but a complete hoax.

According to research, this story had been circulating in the internet for quite a while now. There are also a couple of different versions to the story, the earliest one was probably during the 80's.

Snopes website particularly did an intensive study of the story. It appears like the urban legend did not originate in the Philippines, and most certainly, did not only exist in here. Similar stories came out in different countries as well, including US and Australia. 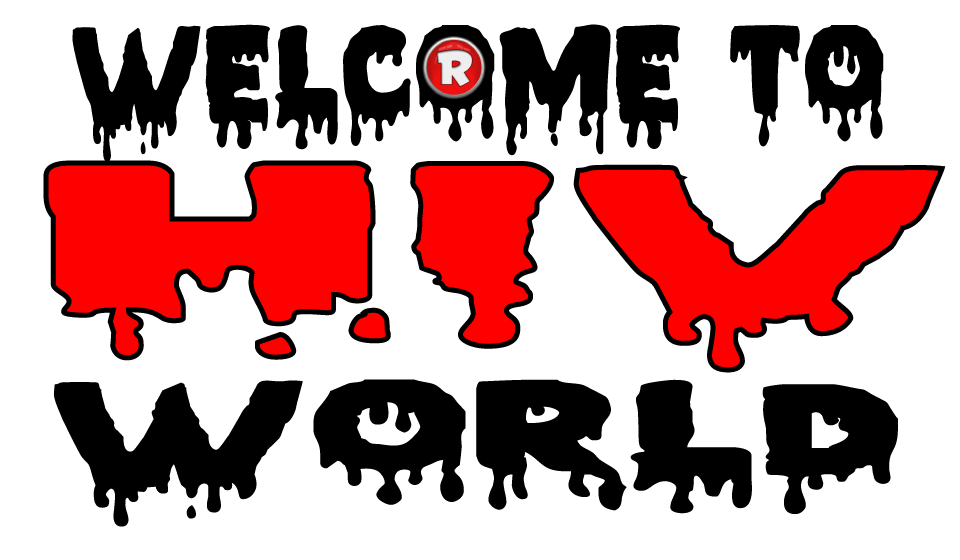 In the article, it was pointed out though that the storyline involved movie theaters and cinemas as the place of attacks. Also, other versions involve AIDS as the infective disease in the syringe, and not HIV.

But either way, this urban legend looks like it was a complete made up, than a true story. Probably, it was invented by certain people who wanted to hijack the economy of the movie industry. And that, the story just evolved into different versions as it got passed from different locations.

And there you go! That is the second part of some popular Philippine urban legends. I would try my best to come up with a part 3, hopefully.

Meanwhile, if you haven't seen the first part of this blog series, just check on the link below. 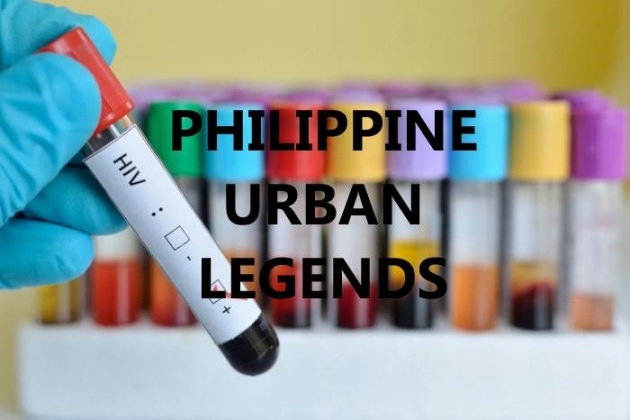 You might also want to check out other Halloween related blogs written here in BitLanders. See the links below.

► Amazing Halloween Traditions From Around The World by Eeza_1986

► The Evolution of Halloween Costumes by Chineyes