Film Review: AMERICAN SNIPER – the movie you dare not criticise 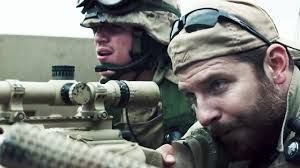 You don’t want to criticise Clint Eastwood’s film of Texas-born Chris Kyle’s 2012 autobiography, American Sniper, on the internet – not if you don’t want to be trolled. Jennifer Aniston fans have got nothing on the defenders of this movie, wishing that detractors of Kyle and the movie be caught in the cross-hairs of his rifle.

There is much to admire in Kyle. As a skilled professional, a trained Navy SEAL, he ensured that American ground troops could carry out their operations in areas under (allied force-imposed) curfew. Kyle had to be on the watch for military-age males who might be suicide bombers or carrying RPGs. He needed to ensure that he wasn’t killing men in prayer (in the movie, he carries a tiny copy of the Bible in his pocket). According to Pentagon figures, he recorded 160 kills (Kyle apparently put the figure at 255). He served four tours of Iraq and would perhaps have gone back for more had he not suffered (understandably) from post-traumatic stress disorder. He was nicknamed ‘the Legend’, wore a ‘Punisher’ t-shirt and apparently (though not quoted in the movie) said that ‘there are some problems violence can solve’.

Let’s not forget that this was a guy who signed up and put himself on the line – so unlike most of us (except maybe law enforcement officers, private security contractors, and, well, a heck of a lot of people) he faced the prospect of death every day. You don’t do that for the buzz, surely. You do it because you actually believe you doing it to protect your family and your men.

It is probably best not to think of American Sniper as a Clint Eastwood film, as if it were an auteur project. The prime mover behind the project is star Bradley Cooper, who purchased the film rights. For the most part dialling back on his charisma, Cooper ages more than a decade in the role, though I wasn’t sure if he actually played Kyle in his 20s, the rodeo buck rider turned recruit after he saw (in the movie) a news report on American embassies being attacked in the late 1990s.

Kyle’s personality is formed much earlier. We see young Kyle be taught by his father. The gist is that ‘there are three types of people: sheep, wolves and sheep dogs. The sheep get preyed upon by the wolves, who are bullies, but the sheepdog protects the sheep. Don’t be a wolf, son, but don’t be a sheep either.’ As the company O2 puts it, ‘Be more dog’.

So Chris defended his little brother in school and took on a bully. Was he otherwise a violent child? The film doesn’t tell us. Young Chris goes out with his father to shoot deer (that’s some sheep dog-like behaviour). Chris proves he is a good shot. He rushes to see evidence of his kill, dropping his firearm. ‘Hold up,’ says his father. ‘Never leave your rifle in the dirt. Always hang on to your weapon.’ A caption at the end of the movie does not say whether the National Rifle Association was paid for the endorsement of its philosophy.

In training, Kyle doesn’t prove to be an exceptional candidate until he shoots, as it were, a snake in the grass. He is something of a gentleman when he meets Taya (Sienna Miller) a young attractive woman who swore she wouldn’t marry a Navy SEAL. Kyle gets her drunk on two shots in an abridged game of truth or dare. She said she wouldn’t marry a SEAL. Dating one, that’s another thing entirely.

Sure enough they do marry, Kyle wearing his Navy SEAL badge under his waistcoat; time to be shipped out.

Working from Jason Hall’s no-waste screenplay, the film covers Kyle’s four tours as series of suspense set pieces seen through Kyle’s line of sight. When he trains his gun on a child, he expresses no pleasure in the action or what follows. The movie Kyle doesn’t celebrate kills.

The film explains Kyle’s proficiency as a product of his duty to the army, rather than a sport to rack up a high number of hits. The detractors of Kyle and the movie don’t trust his motivation; that he didn’t somehow enjoy it. He is placed in opposition to a Syrian-born sniper on the other side who can kill from over a thousand meters. We have an Enemy at the Gates-style contest, for those who know their sniper movies.

On two occasions, Kyle is on the phone to his wife during combat operations, a scenario that is frankly the stuff of movies. Who is to say that it didn’t happen? Back in the States (but not depicted in the movie) Kyle was said to have shot two robbers in cold blood; the story has not been corroborated.

The film covers the bases of a reactionary pro-intervention narrative in which weapons of mass destruction aren’t mentioned once and 9/11 and Iraq are conflated. The shooting is shown sensitively. Kyle is always shown in danger. Things don’t always work out, notably when a colleague gets shot in the face. Kyle even puts his colleagues in harm’s way, pursuing his Olympic athlete adversary. We don’t find out what impact this had on his service record.

Eastwood stages a terrific sequence near the end when Kyle gives away a troop position exposing them to the advancing enemy; this as a sandstorm breaks out. Calling his wife, who now has two children, he says ‘I’m ready to come home now’. We believe him.

The film explores post traumatic stress disorder and Kyle reluctantly being drawn in to help other troops who respect him and have more trouble than him in adjusting. One ex-soldier had a devastating impact.

Like last year’s Lone Survivor, American Sniper looks set to be taken to the bosom of its audience who consider those who served in Iraq are untainted by the conflict itself. (You can criticise the war, but not the soldiers’ bravery, unless of course, you have evidence of torture or systematic killing by individuals.) The emotiveness of its subject matter should not be under-estimated. I think though filmmakers should aim to show soldiers as people – flawed, scared, not always lacking in good judgement, prejudiced but able to examine their pre-conceived ideas. Heroes don’t need to be holier-than-thou, untouchable. They do in fact-based dramas need to be believable. In the US, it might be considered unpatriotic to criticise American Sniper, which pays tribute to an exceptional individual without rigorous examining him. Those who attack the ‘nay sayers’ might be the very same who downloaded The Interview as an act of defiance in favour of free speech. They should remember why we fight and not resort to knee-jerk abuse.