Film Review: AVANT L’HIVER (BEFORE THE WINTER CHILL): A bad year for the roses 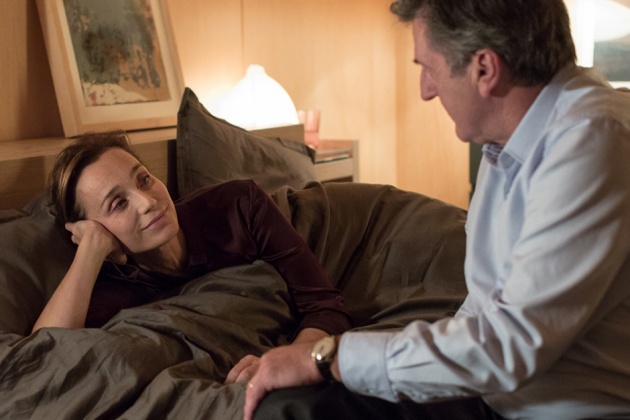 In AVANT L’HIVER (BEFORE THE WINTER CHILL), Daniel Auteuil plays Paul Natkinson, a neurosurgeon with a secret admirer – someone who loved his adaptations of the Marcel Pagnol MARIUS trilogy perhaps. Auteuil is best known for playing Ugolin, the son of a farmer (Yves Montand) who betrays the titular hunchback in JEAN DE FLORETTE (1986) as well as co-starring with Pascal Duquenne in THE EIGHTH DAY (1996) and Carole Bouquet in LUCIE AUBRAC (1997). More recently, he has gone behind the camera, first with THE WELL DIGGER’S DAUGHTER. The man who coaxed him into a leading role is Philippe Claudel, who made the impressive I’VE LOVED YOU FOR SO LONG (2008) starring Kristin Scott-Thomas as a surgeon released from prison having committed a mercy killing. Scott Thomas appears in this as well; as in the earlier film, her character, Lucie, the surgeon’s wife has a fractious relationship with her sister, who is in and out of mental institutions.

Claudel’s interest is in the limits of normal behaviour, how we expect people to behave and how they confound our expectations. Paul’s stalker, Lou (Leïla Bekhti) is a girl who serves him at a cafe, who appears to recognise him. He operated on her, or so she says. Paul has no such recollection. Then he starts receiving bouquets of roses, at home, at his private practice and at the hospital where he operates. He sees her at a concert that he attends with his wife, surrounded by older men, resplendent in a red dress. When his car is diverted to a road where prostitutes are picked up by customers, he sees Lou getting into a man’s car. He follows her, but then men attack his vehicle (‘you want it for free, you pervert?’)

AVANT L’HIVER is a thriller of sorts, but also a family drama. Paul has a fractious relationship with his adult son, who is thinking of buying a boat. There is the inevitable dinner party discussion about how bankers messed up the economy yet they continue to live a charmed life. Meanwhile Lucie continues to tend to the garden, her soul occupation apart from her grandchild. Paul’s tennis partner, a psychiatrist, Gérard (Richard Berry), continues to wait expectantly for his wife’s attention.

Throughout, we wonder what Lou sees in Paul. Is she searching for a father figure? She claims to be an art student, abandoned by her parents and floats in circles that go beyond men she might see in a coffee shop. Lou is also never seen around men her own age.

The opening, in which Paul is interviewed by the police, tips us off that something very bad will happen. For the most part, it skirts past cliché. It is not inevitable that Paul will fall for the girl. However, he cannot explain the feelings that he has to his wife; he knows he should not entertain her attention. But can he really close himself off entirely?

AVANT L’HIVER does not scale the same dramatic heights as its predecessor, with whom it shares some of the same themes – a medical professional for a hero, the fractious relationships between sisters, emotion that bypasses desire. It is gripping enough. Scott Thomas does not have an equivalent meaty role in this as she did in the earlier collaboration with Claudel. This is Auteuil’s film and he gives a convincingly sympathetic performance as does Bekhti.