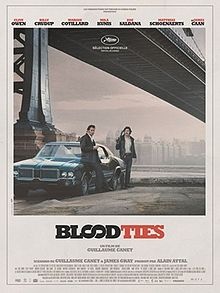 I cannot see BLOOD TIES, Guillaume Canet’s fourth film as director, being a hit outside of France – and even there its commercial performance has been iffy. Although filmed in English and Canet’s first to be set in America, though not his first based on American source material – TELL NO ONE, his sit-up-and-take-notice second feature, was based on a novel by Harlan Coban – it lacks storytelling novelty. What does well is invest a clichéd set up – two brothers on opposite sides of the law coming to blows when the convicted sibling is released from prison - with some degree of depth. We discover that one is not the perfect cop, the other not entirely a heartless criminal.

A remake of the 2008 French film, LES LIANS DU SANG by director Jacques Maillot, in turn adapted from French novel of the same name by Bruno and Michel Papet, it is set in Brooklyn, New York in the 1970s and first off comes across an exercise in style, a throwback to the days when people smoked in public places and men told each other racially insensitive jokes. It begins with a drug bust gone south. Billy Crudup’s moustachioed city cop, Frank crashes in on a gang but doesn’t get the evidence to make a conviction really stick. He puts a guy, Anthony (Matthias Schoenaerts) in jail for six months on possession of an unregistered vehicle that was involved in criminal activity and then beelines for his old lady, Vanessa (Zoe Saldana), whom he once dated before he went nutzoid.

At the same time, his older brother, Chris (Clive Owen), a convicted killer gets out of jail. He gets the ex-jailbird a job in a garage and puts a roof over his head. For his part, the ex-con makes a move on a young colleague, Natalie (Mila Kunis) whom he wants an honest life. His ex, Monica (Marion Cotillard) bugs him about child support. Then the ex-con gets into a fight with his employer. Then he reverts to criminality, cold-bloodedly killing three generations of the same family in one set piece, then engaging in the robbery of a bank truck.

There’s nothing in the staging of the action set pieces that we haven’t seen before. Throw in James Caan as the men’s ailing father and Lili Taylor as their weather-beaten sister (strangely unmarried) and we are in macho urinating contest territory.

It is a long film, with a screenplay co-written by James Gray (LITTLE ODESSA, WE OWN THE NIGHT, the forthcoming THE IMMIGRANT, also with Cotillard) but as the drama develops we understand the nature of the cop’s guilt – how he felt he let his brother down when they were kids. When it comes to it, we understand the choice he makes between badge and blood.

The ending, at Grand Central Station in New York, may remind some viewers of CARLITO’S WAY. It flounders in the comparison. Brian de Palma’s film had mesmerising set pieces and a compelling supporting turn by Sean Penn. In this film, no one really takes a character and pushes it to the edge.

Fundamentally, the ex-con pushes his ex-wife back into prostitution and then as a madam and the unproblematic treatment of this sub-plot makes it difficult for us to sympathise with any of the characters. Canet shuffles around a limited series of tropes – the tart with a heart, the red-blooded man who only wants a woman he’s not supposed to have – whilst the women in the movie are one-dimensional.

Canet is married to Cotillard so he does not let her do any sexy stuff on screen – though she has at least one great outfit, a black dress with a choker collar – but does allow her to emote. I didn’t quite understand why she never got out of the escort game or where, in that racket, her pimp was. So her character with aberrant mood swings and a brief offering of herself to the ex-convict doesn’t make a heap of sense.

Owen and Crudup square off competently, but there are no surprises. I could have done with more realism and less of a derivative soundtrack, which rips off the back catalogue of Martin Scorsese; the music for the film is a lazy trailer-maker’s default setting.

After writing this review, I checked to find that I had actually seen LES LIANS DU SANG on 6 December 2008, in which coincidentally Canet (as an actor) appears. I fear BLOOD TIES will be just as unmemorable, though to Canet’s credit as director he has made something stylistically distinct.