Film Review: CHAPPIE: programmed to fail but not without pleasure 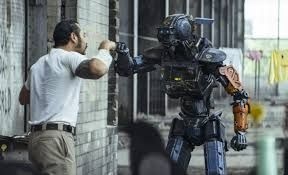 ‘Humanity’s last hope isn’t human’, says the advertising. That doesn’t even begin to describe Neill Blomkamp’s third feature, Chappie, which has attracted the worst reviews of the South African-born director’s three feature career. I would like to tell you that critics are wrong, but I felt as disappointed as many of Blomkamp’s many fans.

My best description of the film, which I imagine was also Blomkamp’s pitch, is ‘Robocop meets Short Circuit in South Africa’. That does not sound particularly radical. The unique selling point is Chappie himself, a robot warrior sent for the scrap heap given a consciousness that has to learn to grow up fast in a violent society. There is some novelty in seeing a formidable titanium-plated warrior cower instinctively like a young child, afraid of what the loud man might do.

It begins with an attempt to re-produce the District 9 vibe, with a set-up announced through TV news footage (CNN commentator Anderson Cooper makes a cameo). Johannesburg is overrun by the criminal element – white for the purposes of the movie, since Blomkamp is mindful of reinforcing racist stereotypes. The police turn to the company Tetravaal, who provides them with the robotic scouts. They are unhackable and obey police instructions. Titanium-plated, they are first to catch a bullet. They are very far from ‘Big Hero 6’ (Disney imagines robots as health workers, impervious to disease and verbal abuse). An alternative title might be, ‘Stop or my robot will shoot.’

Whilst the police place orders for many more scouts, Vincent Moore (Hugh Jackman) is fuming. He designed the Moose, a clunky ED-209 lookalike that can fly, dispense cluster bombs and missiles and do the Kessel Run in less than 12 parsecs. OK, maybe not that the latter, as parsecs are a measure of distance not time. The designer of the scouts, Deon (Dev Patel) is lauded by Tetravaal CEO Michelle Bradley (Sigourney Weaver). However, he isn’t happy. He wants to give the scouts consciousness, the capacity to produce art, have independent thought. Why does he want this? Well, he lives alone and clearly working for an arms manufacturing company is not something he can put on his Lovestruck profile. But none of the major characters has what you might call a personal life.

Contrast that with the low-life criminal element that terrorise Johannesburg’s streets. Two of them, Yo-landi and Ninja (played by Yo-Landi Vi$$ser and Ninja aka Watkin Tudor Jones) have a perfectly functioning relationship. Ms Vi$$ser is a member of the band Die Antwoord whilst Mr Tudor Jones whose real name is more formidable than Ninja directs the Band’s videos. Their gang owes a local crime lord 20 million rand and have seven days to pay. Why seven days? Because if you repeat something three times it sounds like a serious ultimatum rather than an abstract deadline. Their gang decides to pull off a heist that will net them 500 million rand. They can pay off the crime boss and retire in a burnt-out building all of their own. But they need the scouts to be switched off. So they kidnap Deon believing that he has such a device.

Reality check: Tetravaal must have CCTV cameras and also security cover for its most valuable employees. So it is not going to allow Deon, who has been refused permission to trial his consciousness programme, to steal burnt out scout number 22 and take the all powerful Guard Key. Moreover, when he gets kidnapped, they would surely notice. He left his robot helpers watching bad TV.

Deon tells his captors that he has no such kill switch. If there was a kill switch, this film would have never made it to production; some studios allow directors to make bad films to keep them on their books, hence Four Rooms. However, they do allow him to install consciousness into the defective scout, whose battery incidentally is fused into its chest. Yo-landi names the scout ‘Chappie’. ‘Like a happy chappy.’ Chappie doesn’t look very happy, with mismatched antennae and the voice of Sharlto Copley. In fact, Chappie is rather frightened and has only five days to live.

Yo-landi’s nurturing approach yields results. Ninja teaches Chappie bad words and showers Chappie with bling. Deon tells Chappie firmly, ‘I’m your creator. You will not do the heist. You will not kill people.’ You expect him to add, Evan Almighty-style, ‘you will do the dance’.

The boss of the gang wants to give Chappie a taste of the real world. So he drives Chappie to the hide-out of some other thugs who throw rocks at Chappie and shower Chappie with abuse. To them, Chappie represents the police. Chappie, essentially evolving as a young child, does not understand their hate.

At this point, you’d expect Chappie to plug himself into the internet, Lucy-style, to learn everything about Afrikaan culture, street slang and such, and invite Rodriguez to perform in a concert of reconciliation (see Searching for Sugarman). This is of course a dystopia – Rodriguez is booked up until 2020. What Chappie does is lose an arm. Chappie does not want to fire guns, so the criminals find an inventive way to get the scout to use weapons – to put people to sleep. (How Chappie understands the concept of sleep is another of the script’s curious contrivances.)

Chappie is clearly a metaphor for innocent kids being drawn into wrong-doing. Blomkamp milks this for black comedy, notably when the scout goes on a car recovery operation. He also milks it for pathos, when Yo-landi reads ‘Black Sheep’ to Chappie; Deon gives the scout a rubber chicken, but cannot compete.

There are action sequences, and Vincent comes up with a plan to activate his Moose programme that involves an enormous amount of collateral damage. Vincent is the kind of guy who pulls out a gun in the office, puts it to Deon’s head and says, ‘give me the guard key.’ In any other company, that’s a straight route to promotion. Vincent’s attempt to attract a buyer for the Moose end up in ridicule – how is it supposed to go up stairs? (Sorry, I’m confusing it with ED-209 – see Robocop.) So he’s doubly motivated for bad stuff and has no one at home to read ‘black sheep.’

Chappie plays like a kids’ movie, albeit with decapitations and bad language. There is no sex. It illustrates the limits of Blomkamp’s art. On the plus side, Blomkamp successfully got Hollywood to showcase South African music performers. I was reminded that Bong Jong-Ho subverted expectations by making the Korean characters in Snowpiercer, nominally a Chris Evans-John Hurt-Tilda Swinton-Octavia Spencer movie, the true heroes.

Blomkamp’s last hope appears to be the Alien franchise, having been tapped to direct Alien 5. You certainly cannot see Sony Pictures signing him for a further three pictures. Copley has fun as the voice of Chappie (‘sleep’) and you can’t fault Jackman for taking the villain’s role – when the heroes dry up, where are you gonna do? Weaver is cast to pass the death sentence on Chappie: ‘burn him. Turn him to ash’ – a reference to Ian Holm’s character in the original Alien.

[Artificial Intelligence] CHAPPIE Movie Review: A Small Child In The Body Of A Combat Robot