Film Review: HELI: I didn’t ask for my kid sister to fall for a naive police cadet 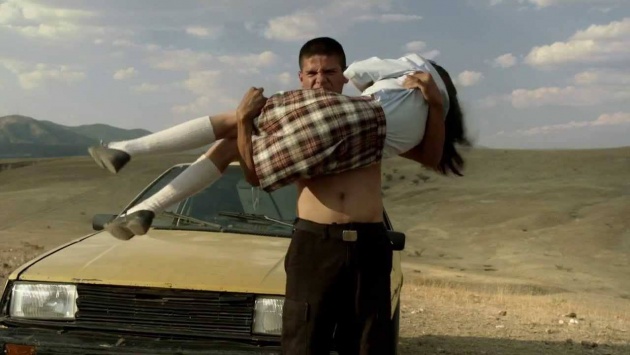 Two scenes are burnt on the memory of those able to sit through the Mexican ‘don’t mess with a drug cartel’ drama HELI. The first is the opening: a long pan up from the inside of a truck hurtling to destination unknown of two men bound in sixty nine-formation - the first man’s legs face the second man’s feet and vice versa - to the front window. Who are the captives? What have they done? What will happen to them? The answer to the last question, filmed in long shot for grim, realistic effect, is shocking. The second, about half way through the film is a punishment scene involving paddles, a lighter and a man’s dignity. This is not a film for a quiet evening out. You watch transfixed and leave the cinema reeling.

Co-written (with Gabriel Reyes) and directed by Amat Escalante, HELI is named not after a place, or for that matter, a helicopter parent, but a young man, Heli (Armelia Espitia), who works the night shift at a car assembly plant. He is married and lives with his wife, father, twelve year old sister and baby; a census lady calls round allowing his wife to explain the domestic set up. Heli’s wife has just given birth and is not comfortable with Heli’s attempts to reacquaint himself with her body. This is the least of his problems. His sister, Estela (a remarkable Andrea Vergara, playing a girl who undergoes experiences well beyond her years) has a crush on a police cadet, Beto (Juan Eduardo Palacios), who is keen to improve on his potential police salary – we see the humiliation that cadets endure. Beto steals some cocaine that was in storage – one presumes at a criminal ‘safe house’ (more like a shack, really). He hides it in the water tank at Heli’s place. Heli discovers it, locks his sister in her room and disposes of it. Then armed men come knocking – or rather charging the door down, killing Heli’s father (fortunately wife and child are away visiting). Heli and Estela are taken with Beto first to the location where Heli disposed of the drugs (father’s corpse is dumped on the way) then to the house belonging to a head of the criminal gang; Estela is separated from the two men and then the punishment begins.

The middle scenes are notable for the involvement of video-game playing children in the beating, joining in it has to be said with varying degrees of enthusiasm (their actions are not governed by righteous anger). The remainder of the film deals with the aftermath. Estela is still missing and Heli only gradually tells the police what really went down; his father’s murder soon becomes a ‘cold case’.

HELI not only describes the absence of division between adulthood and childhood, but also between emotion and work. Heli tries hard to keep his job at the plant, but he is injured – there is no health insurance in Mexico for semi-skilled workers. He also struggles to maintain a meaningful relationship with his wife. He doesn’t expect Maribel (Reina Torres) the detective assigned to the murder of his father to throw herself at him as she does, expecting a hot-blooded damaged young man to make a move on her. (She bares her scars too.)

Not only is some of the behaviour depicted here left field; so too is some of the imagery. There is an extraordinary scene of a tank that turns up outside Heli’s house in the aftermath of the murder of his father. Is it the cartel warning him to keep his mouth shut or a military vehicle that had simply taken a wrong turn? Escalante’s film verges on surrealism but remains rooted in social realism. There is no catharsis for Heli; he is not a victim of over-reaching ambition but in trying to keep himself and his family separate from the criminal world.

How do we process his story? Escalante doesn’t give us a single take-away point. HELI cannot be reduced to ‘simply’ a cautionary tale about people who want to get rich quick selling drugs. Nor is it ‘just’ an indictment of the failure of the government to tackle criminal gangs! Nor can you simply describe it as bemoaning the lack of a childhood in emerging economies.  Nor is it just about complex emotional needs of the characters not being met by outlets available to them in a godless world. It is about all of these. It reverberates with a multi-tiered burrito-stack of social malaise. And then some!