Film Review: THE GRANDMASTER – kicking in the rain 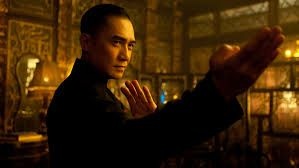 In the United Kingdom, it feels like we are the last people to see The Grandmaster, director Wong Kar-Wai’s film about Ip Man, the martial artist who popularised kung fu (a brand called Wing Chun) and taught young Bruce Lee everything he knew, except perhaps to stay away from bad dubbing. It opened the 2013 Berlin Film Festival in a 130 minute version, 25 minutes longer than the cut released in the US and now here. So in a sense we’re still waiting.

Wong Kar Wai’s film isn’t a biopic in the conventional sense. It focuses on Ip Man’s relationship with Gong Er (Zhang Ziyi), the daughter of a grandmaster, who is something of a martial artist herself (practising ’64 hands’) though unable to be anointed her father’s heir on account that a woman could not be accepted as a grand-mistress.

The film opens in the Southern city of Foshan in 1936 with a kick-butt action sequence in the rain of a straw-boatered Ip Man (Tony Leung) taking on a group of fighters. Who are they and why are they attacking him? I don’t know. But they are obviously quite upset. The action choreography is by Yuen Wo Ping, who normally does wire work. Here there is a lot of kicking and at one point a rickshaw is concertinaed. At any rate, Ip Man acquits himself well. He must represent the South and take on a Grandmaster from the North, Gong Yutian (Wong Hing-Cheung) or rather his heir, Ma San (Zhang Jin). But first he has to take on a group of fighters who practice different sorts of kung fu. He is taken to a brothel to meet them. Why a brothel, and one with an elevator (at least according to the voiceover)? Too many questions!

Ip Man describes the first forty years as spring. Why? Because Wong Kar-Wai loves a voiceover! Kung fu is about two things: ‘the horizontal and the vertical’. Swinging your arm across and kicking people in the chest, got it. ‘It’s about precision’, that is not breaking a floorboard.

Gong Yutian has a quest, to unite the kung fu schools north and south of the Yangtze River. Why, I’m not sure, maybe it’s a union thing. By defeating Gong Yutian, or, more accurately breaking his bread cake, Ip Man is not subjugating himself to his ‘guest’.

Yes, challengers are treated as guests. They receive a banquet before the fight. Then there are gifts. (‘I took your eye out – here is a priceless Ming vase for your trouble! What, you can’t see it?’) Ip Man ought to fight Ma San, but Gong Er challenges him instead. If something is broken, Ip Man will concede the fight. A floorboard splits. Loser!

Ip Man promises to go north to seek Gong Er out. But then the Japanese invade China. We are told Ip Man refuses to collaborate, so he and his family have to flee, selling his very expensive coat, minus one button.

That Ip Man hangs on to the button and hangs it on a nail is typical Wong Kar Wai. He loves the small idiosyncratic gestures. Then a huge amount of time passes. Two of Ip Man’s daughters die; we aren’t introduced – let’s not get too emotional. Ip Man travels to Hong Kong to find work, where kung fu schools are a yuan renminbi a dozen. He is asked to demonstrate his Wing Chun. ‘Have you eaten?’ Ip Man asks. ‘Yes.’ ‘Best to wait!’ But the man is impatient. Ip Man makes him throw up his Won Ton noodle soup. That, dear reader, is the only moment of humour.

Ip Man eventually finds Gong Er, who has established herself as a doctor. ‘If I had known you were downstairs, I would not have made it so easy,’ she tells him. Presumably she would have despatched a couple of locums to show him a few moves – or ask for a stool sample. We learn that Gong Er made a vow never to teach or to marry. I don’t understand these random vows. Consider the word ‘aesthetic’. I don’t understand these random vowels either.

Christopher Doyle used to shoot Wong Kar Wai’s movies but he has been replaced by Philippe Le Sourd who gives us moody action sequences and occasional bursts of slow motion. It doesn’t feel like an epic. It is very like a bitter sweet, unconsummated love story – typically Wong Kar Wai stuff.

The best fight scene, because there is some sense of emotional involvement, is in a flashback in which Gong Er seeks to take back her father’s legacy from Japanese collaborator, Ma San. The encounter takes place on a station platform as the train, with its endless set of carriages leaves. Both fighters are injured. ‘I give you the 64 hands,’ Ma San declares as he lies defeated on the ground. ‘No’, says Gong Er, ‘I took them.’

Wong Kar Wai loves his parallels, Gong Er copying then being taught by her father; Ip Man teaching boys. I’m not sure what purpose this parallel serves, situated right at the end of the movie.

Most people will see The Grandmaster for the fight scenes. There isn’t much else. It is a cool and reserved film. The story is narrated through voiceover and captions rather than is experienced emotionally. There is much made of trading Ip Man’s coat button, but my buttons weren’t pressed. A pity.