Film Review: THE SKELETON TWINS – more than a bone to pick with this one 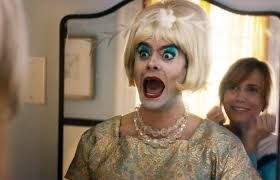 The practice of casting comedians in serious roles isn’t one I wholly agree with. We expect them to exercise their comedy muscles and when they don’t, we are disappointed. On the other hand, they don’t always prove they can give nuanced performances; you remember that they are at their best being two dimensional. (If anyone can think of a three-dimensional comic performance, I’d like to know about it.)

Bill Hader and Kristen Wiig are the latest SATURDAY NIGHT LIVE alumni to go dark. In director Craig Johnson’s THE SKELETON TWINS, co-scripted by Johnson and Mark Heyman, they are a pair of siblings, Milo and Maggie Dean, living on opposite sides of America - he a struggling actor in Hollywood, she a dental hygienist in New York - who have an almost psychic link. They both attempt suicide on the same day – well, Maggie contemplates when she gets the call that Milo is in the hospital. She brings him back to New York to live with her steady eddie husband, Lance (Luke Wilson), an outdoor-physical type who didn’t give Maggie a honeymoon and wants to catch up. Maggie is drawn to the instructors in the classes she attends; her latest, Australian Billy (Boyd Holbrook) teaches scuba diving. The men tend to make the first move, sensing her vulnerability, but that’s not the point. Maggie is incomplete; a child isn’t the answer (Lance wants one, she doesn’t). She hasn’t spoken to her brother in ten years before he attempted to paint the bathtub red, as it were.

What follows is a confrontation with the past: Maggie’s guilt for her part in breaking up her then fifteen year old brother’s relationship with his English tutor (Ty Burrell). The shrill, wide-eyed self-pitying Milo tracks down his educator-lover in a New York bookstore. He’s married with a wife and (fat) child – there is a thing about fat children in this movie, underlined by an encounter between Maggie and an old school friend in an ice cream parlour. Milo was a minor, but for him the love for his tutor was real. Maggie played her part, dressing young Milo as a girl at Hallowe’en - very convincingly, I might add, in the flashbacks, less so in adulthood.

So there are parallels: Maggie repeating Milo’s thing for teacher figures, guys who take control. Alas, it isn’t explored in any depth. Yes, Milo and Maggie’s father died when he was fourteen – he jumped off a bridge, for reasons not fully explained. Their mother, Judy (Joanna Gleason), who visits at Milo’s invitation, is a horrifyingly self-absorbed new age ‘cleanser’; the type I’m sure who has never used a bottle of detergent in her life (except, maybe, on her hair). Maybe she thought detergent was a young adult novel.

‘There are worse things than being a bad mother,’ Maggie reflects. Yes, directing films that don’t go anywhere, wasting 93 minutes (plus commercials and travel) of an audience’s time. What we are meant to think is that Maggie misses Milo; together they can self-correct, united in a sort of understanding.

The problem is that I really sympathised with Lance. He’s a caring guy who doesn’t know that he’s not enough for his wife. He’s the real victim here and Wilson makes him profoundly likeable; the polar opposite of Milo and Maggie.

If there is a villain, it is perhaps the mother. She failed to provide the support the siblings needed after Dad died; Milo rushed for comfort in the wrong place. Although we don’t read any of his writing, I can imagine the syrupy prose, poetry about bare branches. Part of Lance’s job is to clear fallen twigs, one of the film’s metaphors, after Moby Dick. Given a job to work with him, Milo is a strict ‘one twig at a time’ guy. By the end, he’s practically a lumberjack. Lance is the real confidence giver, not these trainers or academics, but no one says so.

So, who likes films about self-obsessed, neurotic but uncharismatic New Yorkers? That’s a small demographic. THE SKELETON TWINS is playing at one screening per day in a handful of London cinemas (did I say the siblings have skeleton tattoos?) The absence of an audience will consign it to an unmarked grave.