My Hong Kong Disneyland: The Happiest Place on Earth blog is incomplete if I missed one of Disneyland highlights the Flights of Fantasy Parade. The parade is a thirty-five minutes interactive celebration of Disney characters in colorful themed floats with an accompaniment of Disney classic songs making it quite magical, joyous, and fun. An added gravity-defying acrobats and aerialists performing up in the air adds up the excitement to the crowd. There are two show stops during the parade due to the on-going renovation of the Sleeping Beauty Castle at the Main Street, USA. Every time the parade stops, the songs "Fly with Me" by the Jonas Brothers' and "You Can Fly" from the movie "Peter Pan" is played consecutively in English and Cantonese version.

Disney's Flights of Fantasy Parade in Hong Kong Disneyland was a replacement of the seven years show "Disney on Parade". As part of Hong Kong Disneyland's fifth-anniversary celebration, a "Celebration in the Air" was unveiled to the public on the 18th of January 2011 until the time of writing.

A peek at Disney's Flights of Fantasy Parade in Hong Kong Disneyland from the beginning up until the end of the parade. This is a supporting video for all photo attachments and details that are stated in this article but not seen in the attached photos. Seeing this video will let your imagination wander and clears out whatever bewilderment that may come along as you read through my article.

Guests are gathered around the whole area of the park and had their own best spot. When the time struck 1:30 pm a loud voice from the presenter echoed in the whole park as he finally introduced the opening of the show with this line:

"And now -- Let your imagination soar, as we present Flights of Fantasy!" 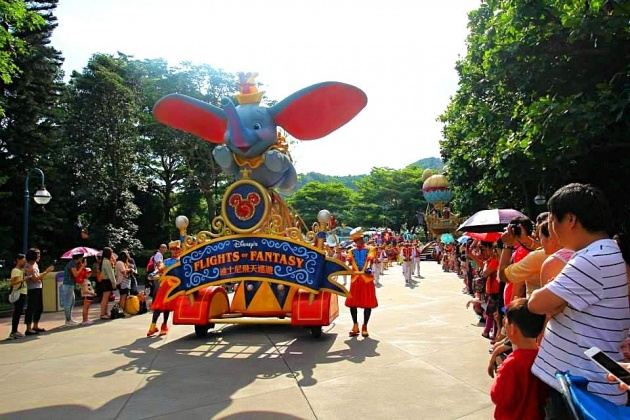 After the opening announcement of the parade and the airing of the marshal song, the Dream Takes Flight then came into sight presented by the float of Dumbo - the banner carrier of the Flights of Fantasy Parade in Hong Kong Disneyland. The float is patterned after the 1941 animated film entitled "Dumbo" - a flying elephant on the uppermost surface of the float with moving ears and blinking eyes. During the opening parade a grand marshal song "Flights of Fantasy" was played both in English and Cantonese on loudspeakers all over the place. Flights of Fantasy is also one of the aerial rides at the Fantasyland that is present in six Disneyland Parks in the world including Hong Kong.

Take a flight on imagination

It's a brand new day,

Wherever the wind blows,

So come on, come on

A Flights of Fantasy

The parade is categorized into units and each unit is represented by Disney characters from the chosen Disney animated films. All the units are Disney animated inspired making the whole parade interesting, lively, exciting and vibrant. So let me paint this article red as I present to you the live animated Hong Kong Disneyland Flights of Fantasy Parade seven float units. 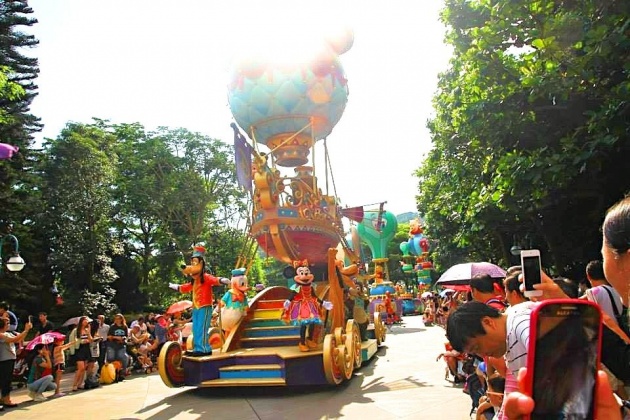 After the Dreams Take Flight introduction, the "Flights of Friendship" then came into sighting in Mickey's Magical Airship float. Together with this flight are Mickey's friends Minnie Mouse (right front), Pluto (at the back of Minnie), Chip (next to Pluto) - one of the chipmunks in Chip 'n Dale, Goofy (left front), and Donald Duck (at the back of Goofy) who greeted and entertained all the guests in the park by dancing featuring the songs "Mickey Mouse Club March" and "Zip-A-Dee-Doo-Dah" while waving and sending flying kisses to each and every guests. 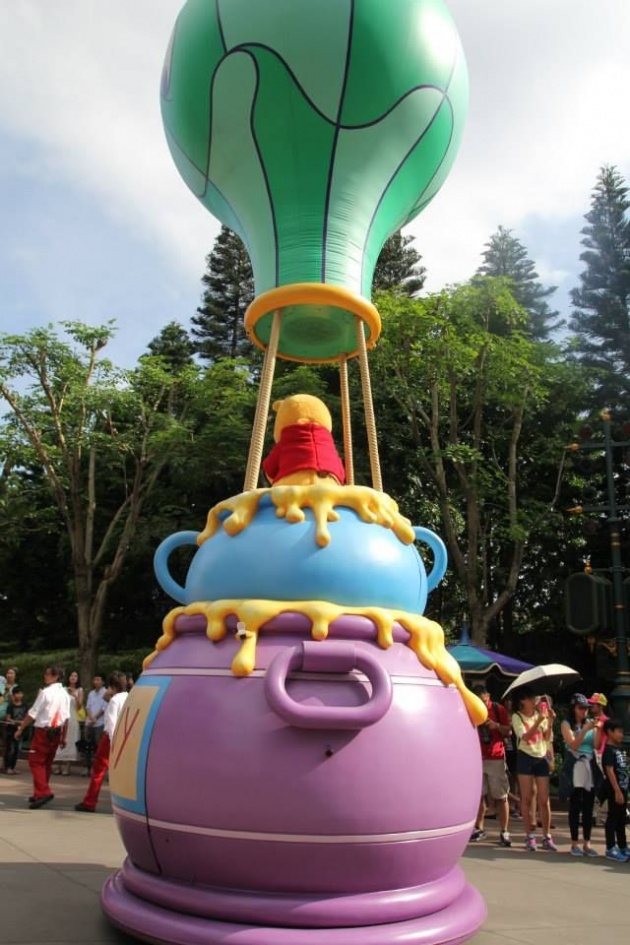 As the float of Caught Up in Daydreams came nearer, the featured songs were changed to "Heffalumps and Woozies", "Wonderful Thing About Tigger", and "Winnie the Pooh" along with the Winnie the Pooh float. What you can see in the photo is the back part of the Winnie the Pooh float. I was fixing something when this float passed by and this is the result of not catching it up. Anyways, this is just to give you an idea of how the first float looked like. Pooh is riding in his double broiler Hunny Pots with spilled honey and a hot air balloon be like. The details of the pots and the balloon are similar to the photo below but only differs in colors. 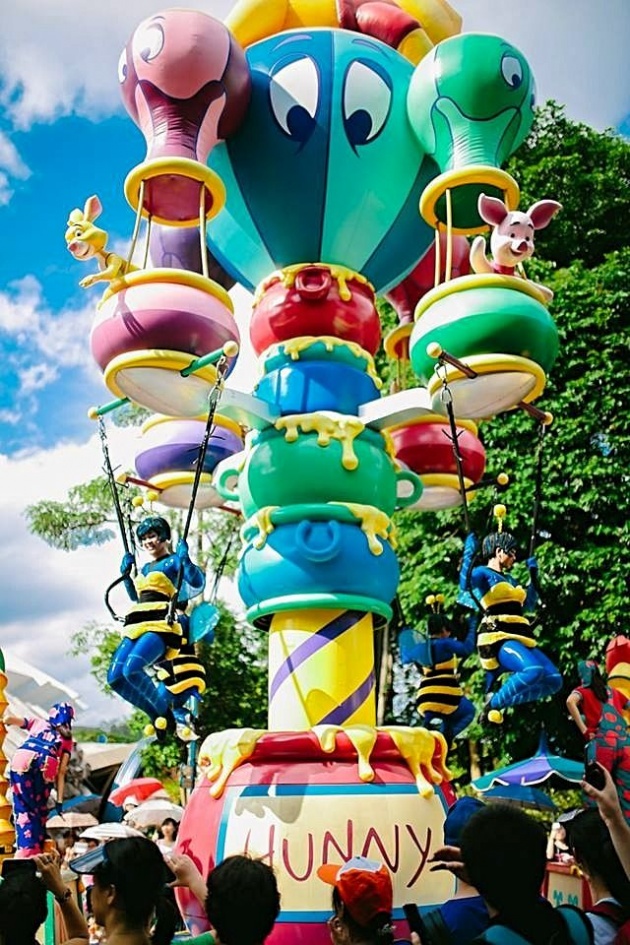 You can actually see two floats of Winnie the Pooh. In this photo, this is the second float ridden by the acrobats and the aerialists - the ones in bee costumes with the attached harnesses who does bungee jumping exhibitions together with the other performers who were in the front and end part of the float. Piglet and Rabbit are not mascots by the way they're just decorative figures. 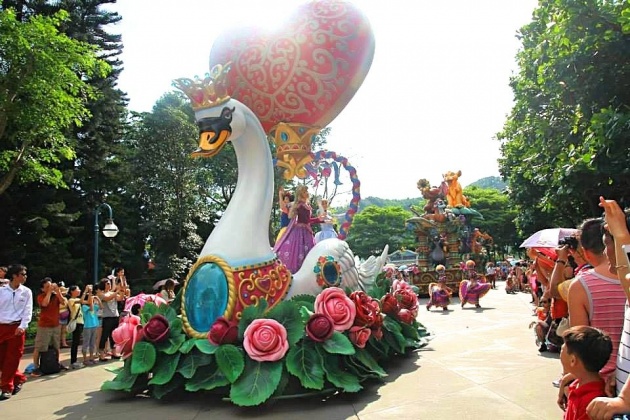 Right after the Caught Up in Daydreams Unit is the Romance Takes Wing Unit that is presented by an airboat in Swan shape with a red heart balloon. The airboat skirt is wrapped in artificial leaves with huge pink and red roses. At the center of the Swan are the four Princesses from Disney animated Princesses films (my fave) that I will be discussing the description of the next photo. With this float, the audience were serenaded by the soundtracks of the Princesses movies such as "Someday My Prince Will Come" from "Snow White and the Seven Dwarfs", "Once Upon a Dream" from the "Sleeping Beauty" movie, "So This Is Love" from Cinderella and a song from its own movie title "Beauty and the Beast". 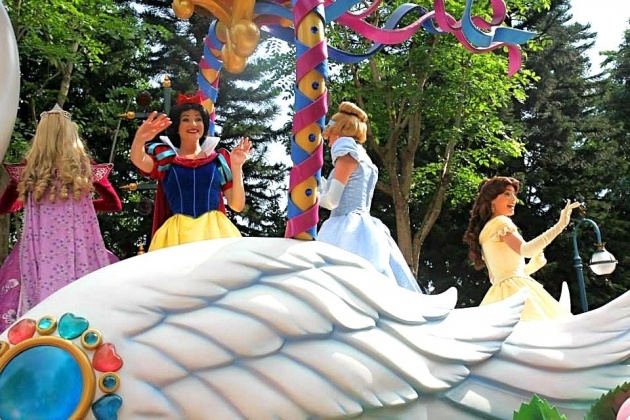 Let me have a second photo for a clearer vision of the four Princesses in the Swan airboat. Presenters of this float are the Disney Princesses from four of Disney's animated featured films and starting it off with the lady in purple - Princess Aurora (the one facing her back with curly hair) from the movie Sleeping Beauty. Beside Princess Aurora is Snow White (the one waving in a blue top and yellow bottom dress) from the movie Snow White and the Seven Dwarfs. Next to her is the self-titled Cinderella (the one in side-view wearing a pale blue gown). Last but not the least besides Cinderella is Belle (in yellow gown) from the movie Beauty and the Beast. 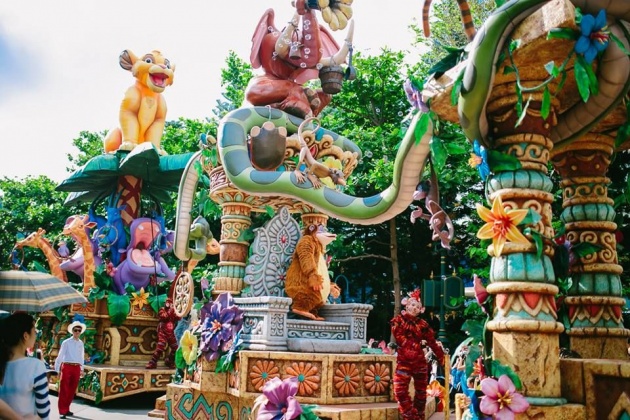 Connected floats of Jumpin' Jungle Jam where a combination floats of featured Disney characters from the movies "The Lion King", "The Jungle Book," and "Tarzan". Came right after the Romance Takes Wing Unit is the Jumpin' Jungle Jam float of Simba and his jungle friends. In this float, the featured Disney characters in costumes are Baloo - the sleepy old sloth bear (not seen on photo), King Louie - an orangutan that leads other jungle primates (the one in the Kings Throne), Rafiki - a wise male baboon, and Timon - the talkative meerkat. Two male performers wearing red jumpsuits that you can see in the photo are acrobats jumping and flipping. The rest of the characters in the photo are all figure characters. There are three soundtrack songs played on this float and these are "Trashin' the Camp" - "Tarzan", "I Just Can't Wait To Be King" - "The Lion King", and lastly "I Wanna Be Like You (The Monkey Song)" - "The Jungle Book". 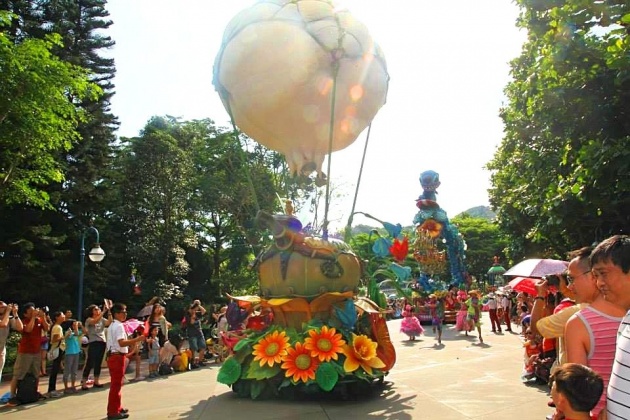 A warm smile from the four fairies riding in a red bug car greets the guests as it was accompanied by a soundtrack "You Can Fly" from "Peter Pan" movie. Tinker Bell is one of the characters in the movie and behind the four fairies is the Magic of Pixie Dust Unit - a fairy inspired float from one of the characters in the 1953 animated film "Peter Pan". Tinker Bell then became the lead role of "Tinker Bell and the Lost Treasure", that's where the flying cotton float created. The fairies float embellishments were in various plants and flowers as describe in the movie. Tinker Bell (the one with a golden hair bun) at the center of the crafted pumpkin is the presenter of this float. 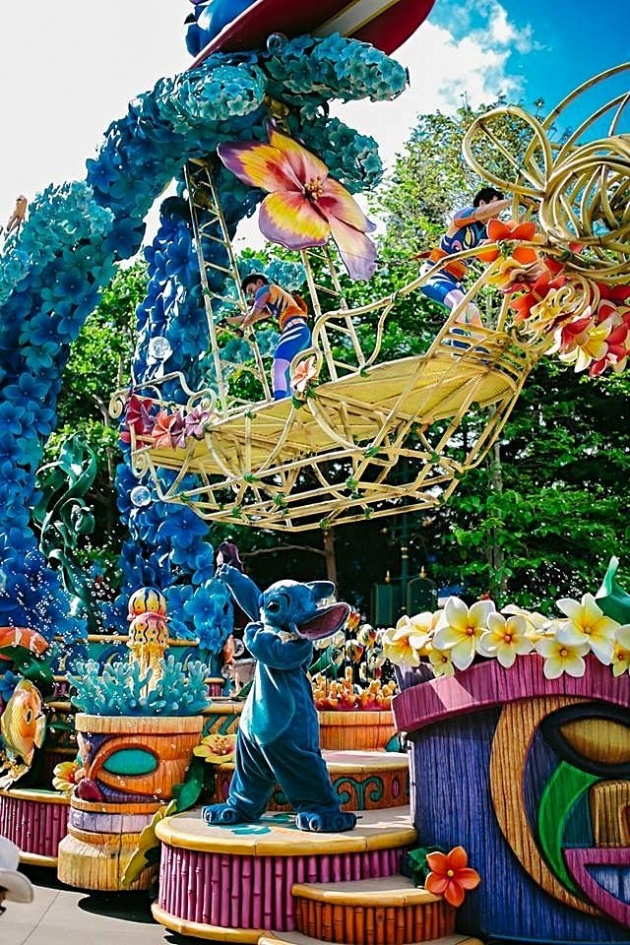 Hawaiian dancers and surfers together with Lilo were dancing the Lilo & Stitch movie soundtrack -- "He Mele No Lilo" and "Hawaiian Roller Coaster Ride". Lilo leads the tropical float of the Hangin' Ten and Ridin' High Unit while Stitch - is on the float wearing the costumed character in the photo. Atop Stitch are acrobats who windsurf in the air using the similarly Peter Pan float. The float was based on the animated film Lilo & Stitch that was released in 2002. 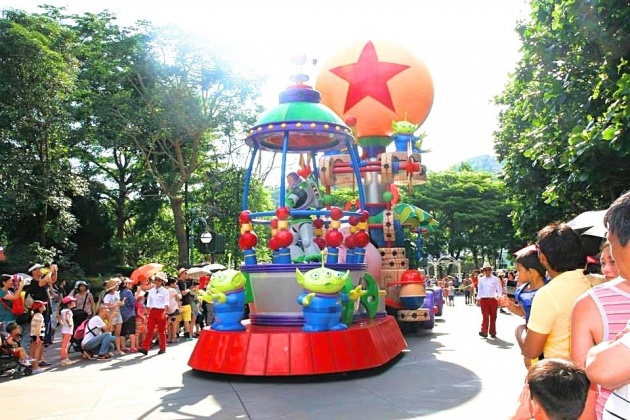 "You've Got a Friend in Me" from "Toy Story" soundtrack is the last song played as the last unit of the Flights of Fantasy Parade - To Infinity and Beyond came nearer. A Toy Story inspired float with Buzz Lightyear inside an open space shuttle together with the Green Paratroopers on the larger float behind. By this time the parade stopped before the final performance of the show. Other Toy Story characters like Woody, Jessie, Rex, and Hamm came down from the float and greeted the guests. It was ended a "Celebration by the Air" as the Green Paratroopers delivered the greatest pleasure to the crowd as they perform their best parachute bungee jumping.

BEYOND THE FLOAT IS THE END OF THE PARADE

Still part of my Hong Kong Disneyland adventure but I opted not to include Disney's Flights of Fantasy Parade in one of the four parts of my Hong Kong Disneyland: The Happiest Place on Earth article. Primarily, Disney floats has seven photos already and I thought it would be great for just one writing - true enough. Though beyond the float is the end of the Flights of Fantasy Parade, that doesn't mean that my Disneyland trip is over. One more writing about the Fantasy Gardens and all will be set to go.

A complete walkthrough video from Curious Kittle of Hong Kong Disneyland from broad daylight to dark colorful night. From the city to Disney shops, rides, and shows you can see it here and the Flights of Fantasy Parade of course. Enjoy the video.

VIEWING AREA FOR THE PARADES