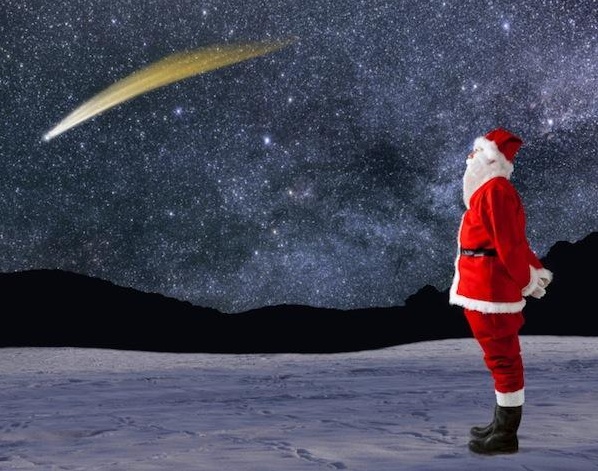 It’s mid-December once again, time for all those holiday lights and festivities. Even the sky gets into the action, with the last meteor shower of the year, the Geminids.

Not part of a comet, they stem from an asteroid (which is nowhere near Earth at the moment) whose orbit intersects with ours, leaving debris ranging from the size of a sand grain to a pea. When our planet tumbles through it, fireballs can ensue.

This is good news because once again, as seems to be the norm for 2014, moonlight could interfere a bit. The moon was full a couple of days ago so is still pretty bright. But there are some pockets of time that afford enough darkness for a decent view. And as usual, the farther one is from urban lights, the better a shot it is.

In a year when moonlight doesn’t obscure the view, you can easily see 50 or more Geminid meteors per hour on the peak night,” saysEarthsky.org. “However, in 2014, the waning moon will dampen the display in the peak viewing hours.”

But moonlight will not necessarily drown it all out.

“Don’t let the moonlight discourage you,” Earthsky.org continues. “A good percentage of these yellow-colored Geminid meteors are quite bright and will overcome the moonlit skies.”

What’s the best time to look? The night of Saturday December 13 and Sunday December 14 are ideal, since they are the peak nights, though the shower extends through December 17.

“Under a clear, dark sky, you might see a shooting star every minute from 10 p.m. local time until dawn on the peak nights,” saysSky and Telescope. “Geminids can appear anywhere in the sky, so the best direction to watch is wherever your sky is darkest, probably straight up. Small particles create tiny, quick streaks. Occasional brighter ones might sail across the heavens for several seconds and may leave a brief train of glowing smoke.”

The last quarter-moon rises around midnight, saysSpace.com, so 9 or 10 p.m. is the best start time for sky gazing in search of a shooting star.

“The first half of the night should be the best time for observing due to the potential interference from the bright moonlight,” Space.com reports.

The most beautiful Christmas Trees in Lithuania, 2018

The most beautiful Christmas Trees in Lithuania, 2018 - Photo credit:15min.lt, Edition by Amber255 v…