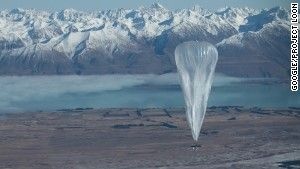 By now it's kind of hard to believe, even sort of embarrassing.

About 57% of the world population is offline — mostly because of unavailable Internet in poor or rural countries. The United Nations set a goal of getting that number down to 50% by the end of 2020.

But the U.N. now admits, that's not going to happen. In fact, overall Internet access growth is expected to dip by .5% this year.

For advocates like Facebook's Mark Zuckerberg, that's bad news. His goal of "connecting everyone" via Internet is "one of the fundamental challenges of our generation," he said. Internet access, he believes, could end extreme poverty.

One problem is cost. Or, as the U.N. puts it: "In many of the world's poorest countries, where broadband could potentially have the greatest benefit in terms of bridging development gaps, even basic broadband service remains prohibitively expensive."

Another hurdle: Many nations include huge wilderness areas where hard-wire delivery systems like landlines and towers don't exist.

Some say the solution consists of just two words: Look up.

Google, Facebook, SpaceX and other outfits plan to beam the Internet from either low-orbiting satellites or high-flying drones and balloons.

What: A company called OneWeb aims to launch a more than 600 tiny satellites designed to beam high-speed Internet down to Earth.

Where: The satellites will orbit about 750 miles high. That's much closer to Earth than current Internet providing satellites, which are now 22,000 miles away. That shorter distance will speed up delivery of the signal.

Who's behind it: OneWeb is led by Greg Wyler and backed by Virgin Galactic businessman Richard Branson. "It could dramatically help close the wealth gap," Branson told CNN.

How much: Initial estimates run from $1.5 billion to $2 billion, Wyler told CNN.

When: The service is expected to begin by 2019.

Where: Like OneWeb, SpaceX's satellites would orbit about 750 miles above the Earth to allow for faster service.

Who's behind it: SpaceX CEO and PayPal co-founder Elon Musk told Motherboard in July he thinks "the long-term potential of it is pretty great." The "communications technology will be substantially more advanced" than existing satellite Internet projects, Musk said.

How much: In January, Google and Fidelity provided $1 billion to fund the project.

When: Testing of the technology is expected to begin in 2016.

Where: Google says they would float above commercial airplanes, between 60,000 and and 90,000 feet up — all around the world. Each balloon would operate for about 100 days at a time.

Google wants to beam the Internet to wilderness areas by using high-flying balloons. (Click to expand.)

How many: Google is scaling up to be able to launch dozens -- or even thousands -- of balloons, said project lead Mike Cassidy.

How much: Google told The Verge each balloon would cost "tens of thousands of dollars," which is much cheaper than communication satellites.

When: Testing is going on now.

What: Facebook has built an unmanned, Internet-broadcasting airplane called Aquila -- latin for eagle. It's covered by solar cells and has a huge wingspan of 140 feet -- about the same as a Boeing 737 airliner. It's designed to fly for three months at a time at an altitude of 60,000 feet, said lead engineer Andy Cox. It will use lasers to deliver high-speed Internet within a 50-mile radius on the ground below.

Facebook has built a drone aircraft designed to beam the Internet from high in the sky. (Click to expand)

When: "Over the coming months, we will test these systems in the real world and continue refining them so we can turn their promise into reality," wrote Facebook's Zuckerberg.

Adding huge "constellations" of tiny satellites to the already-crowded space around Earth won't be easy. For example, companies that operate satellites that are located far away -- 22,000 miles out -- fear that -- under certain circumstances -- closer, low-Earth-orbit satellites may interfere with their electronic signals, according to SpaceNews.

A broader, long-term industry question: How will companies be able to manufacture thousands of satellites quickly and cheaply? OneWeb has hired French-based Airbus to build 900 satellites at a rate of four per day. Most will be built in the U.S., according to Airbus.

"They need to bring the sort of large-scale assembly line processes and efficiencies found in the automotive world to space, and that's a really new thing for us," said satellite industry expert Brian Weeden, technical adviser for Secure World Foundation.

But if everything works out as planned, it won't be long before the World Wide Web will truly live up to its name.