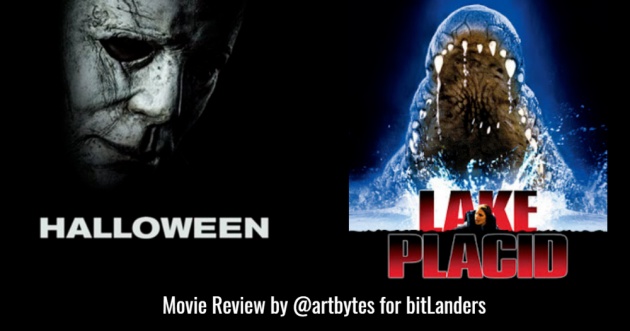 So far, I have watched only two of the movies above. Halloween and Lake Placid. It's the first time I saw these movies and I thought of making reviews for them.

Before I saw this movie, I was intrigued why it was titled Halloween. Obviously, the reason was, Mike Myers did all his horrific crimes during Halloween.

Michael Myers, a deranged psychopath, made his first kill when he was ten years old. He is a quiet boy with long blond hair and smooth face. As Dr. Loomis puts it:

To the untrained eye,  there's nothing visually abnormal with this angelic young boy,
but one must remember not to be fooled by his calm, unassuming facade.

But Michael is not an angel.

He made his first kills when he was 10 years old. His victim, a school bully who always pick on him. Wearing a clown mask, he waited for the bully in the woods. He bashed the bully to death with a broken branch. It was the afternoon of Halloween.

At age ten, Michael murdered four persons on a Halloween.

After killing the school bully, Michael went home. On that Halloween night, he killed three more people. He slit his step-father's throat with a kitchen knife. Crushed the head of his sister's boyfriend with a steel baseball bat. Stabbed his older sister with the same kitchen knife he used to kill his step-father.

He spared only his baby sister and his mother. He did not try to run and was sent to a mental institution.

Emotionless- Michael Myers at the back of a police cruiser after his first Halloween murders.

A year after, he killed a nurse in the institution with a fork.

The child christened Michael Myers has become a sort of ghost, a mere shape of a human being.

Michael grew into a huge man in the institution. For 15 years, he had not spoken a word. He was obsessed with creating primitive masks.

Michael escaped. Killing almost everyone that crosses his path. Aside from the masks, he had another obsession. His younger sister.

Mike's sister now goes by the name of Laurie Strode.

Somehow, he was able to track down his sister who is now a teenager. But his sister does not remember Michael.

He retrieved the old rubber mask and a huge machete from their old house. Then on that Halloween night, he started his killing spree again. Killing almost everyone close to his sister. Until finally, his own sister shot him at close range.

One thing I noticed is, Michael's violent tendencies are triggered by bullying and indecent acts. But, even with his senseless and violent nature, it sees Michael Myers still has an affection towards his younger sister.

He was stabbed and shot several times, but he kept on coming back. What made Michael so relentless that no amount injury could seem to stop him? He was finally stopped from a close-range shot made by his sister.

If you are looking for a movie that could give you an adrenalin rush, this movie is it. Unlike other scary movies that the monsters are screaming or roaring, Michael chases his prey in absolute silence. Add the effect of his emotionless mask, Michael is one of the scariest characters that I have seen in the movies.

15 years after his first Halloween murders, Mike Myers got out and went on another Halloween killing spree.

Halloween is scary. Perhaps a most fitting movie to watch during the Halloween night. My rating?

The Halloween franchise, however, has earned more than enough that the producers made at least seven more sequels. The latest is the 2018 direct sequel. 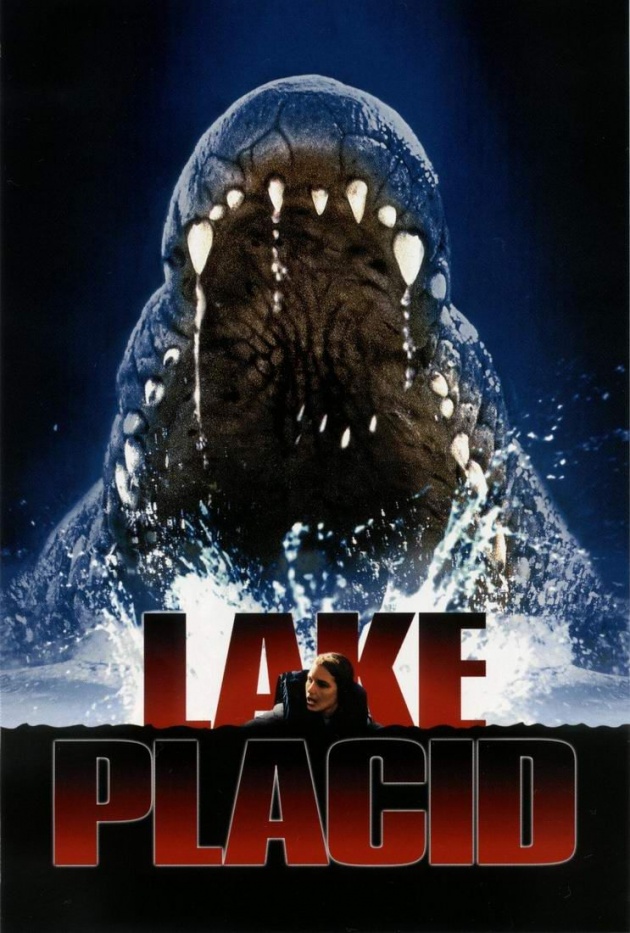 Lake Placid was not as scary as I thought it would be. I was hoping it would be as scary as Anaconda or Barracuda, but it was not. Instead, the movie is a horror/comedy film.

The horror part is from, of course, the monstrous crocodile who found a new home at Black Lake in Maine. It started by biting off the lower half of a diver's body. Then the head of a deputy. 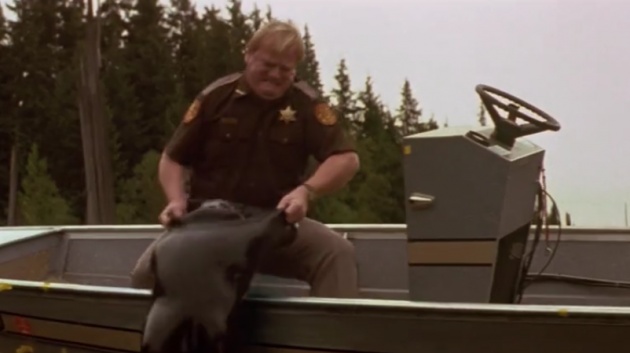 The sheriff pulling out the upper half of the diver out of the water.

There were some thrilling moments where you would half expect that the monster crocodile would pop out from nowhere and chomp off another person (or a bear).

The comedy part… came from almost every character in the movie. Starting with Bridgette Fonda's character-Kelly Scott. A paleontologist from New York who hates nature.

Then there's the old widow Mrs. Bickerman who calmly described to the Sheriff and Game Warden (Bill Pullman) how she killed her own husband.

Later they caught Mrs. Bickerman had fed the crocodile with her cow. The crazy-old widow had developed an affection to the monstrous creature and had been feeding it.

Mrs. Brickman blindfolded a cow and lead it to the bank of the lake to feed the crocodile

After much debate whether to kill it or just to capture it. They decided to capture it alive. But if the attempt fails, they are going to kill the crocodile.

Armed with tranquilizer rifles and hunting rifles, they set off their trap. They dangled a cow from a helicopter as a bait. The plan is to lure the monster out of the water, shoot it with tranquilizers. They continue to lure it towards the gigantic net.

But their plan did not go perfectly well. They were able to shoot the crocodile with a tranquilizer as planned. But before they could lure it to the net, they lost the cow and the helicopter. The chopper crash-landed a few meters away from the shore.

They did catch the monster in an unusual way. The monster crocodile trapped itself in the broken helicopter.

This is a very expensive way to catch a crocodile.

Lake Placid is quite entertaining to watch. It has some scary and thrilling moments. Especially whenever they are on the waters (obviously). However, there are some quite predictable scenes. Like when that bear was standing with its back facing the water, you would at least half-expect that the crocodile would jump out of the water.

It's a good movie to watch if you are looking for some thrill and comic relief at the same time. Some dialogs though doesn't seem to fit in. Perhaps, they were intended to add more humor to the movie.

But for a horror movie, it's not that scary.

Overall I give this monster movie:

All screenshots were done by @artbytes