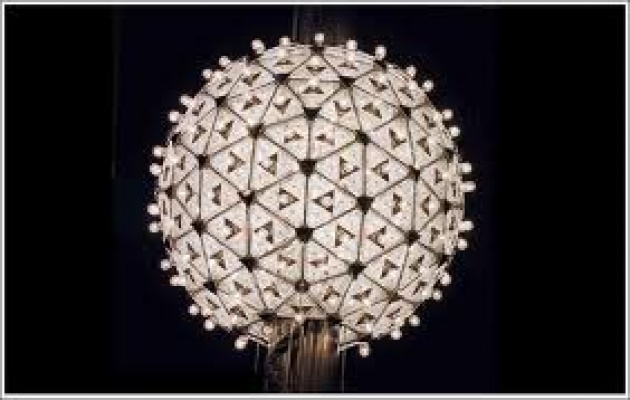 New Year's Eve 1904 marked the first time that crowds gathered in front of the newly built New York Times Tower to celebrate New Year's Eve. In the days prior tp the party, the paper announced that there would be an unforgettable fireworks display to ring in the New Year!  That first year was a huge success.  The New York Times had moved their headquarters to this brand new 25-story elevated building with four basements!  Interesting to note, the basements were designed for the printing presses, and the papers were inked each day/night (a 24-hour operation rotating the presses to give them breaks for maintenance).

As the papers came off the presses, they would be stacked and shipped via the newly constructed New York City Subway system.  The building had it's own underground doors/passageways to the subway cars and Times Square Station (the conversion point for most of the city's subway lines for it's central location), and the newsboys would distribute the papers at each stop to newstands, which in many cases still exist today.

Back to New Year's Eve...following year 1, the first few years were probablematic, and as the crowds grew larger , and the fireworks greater, and setting them off atop the building created a potentially dangerous environment for the revelers below.  Several injuries occurred over these early years of festivity.  A solution was needed!

Max Starr was the electrician who created the first 'Electronic Ball' in 1908, and was inspired to do so by the world's first skyscraper: the 47-story Singer Tower commissioned by Frederick Gilbert Bourne and designed by Ernest Flagg (1906).  The Singer Tower was topped-off, at Bourne's request, with a lighted-beacon for seagoing vessels and their captains to find the New York Harbor at night.  The light was so powerful that it could be seen for 25 miles, almost the entire length of Manhattan!

For New Year's Eve 1908, Starr created this Electronic Ball.  It was a 6' diameter sphere and consisted of 220 bulbs. Since the new Millennium, it's a new model of very expensive Waterford Crystal.  The only years the 'ball' was not dropped and there was no celebration in Times Square were the war years of Word War II, when a black-out was declared by the U.S. Government for fear of it being a target of German Bombers that might plan a secret mission to drop bombs on our beloved Gotham.

As I write this, I can't help but think that another social change that took place with respect to the New Year's celebration in Times Square...just as the master of ceremonies baton was passed from Guy Lombardo, who for decades broadcast a New year's Party each year on CBS from The Warldorf Astoria Hotel on Park Avenue, to Dick Clark, who 'Rocked' Times Square for the last 40 years!  Clark's recent passing is a sad reminder that nothing last forever.  The moral: Enjoy every day, because each moment is a blessing.  The good times will continue, just with different players.  I was fortunate to spend New Year's 1990 on his broadcast platform in front of One Times Square, the magnifcient building that I once managed, with my then girlfriend and Dick Clark  and his wife and small crew.  He was a brillant entertainer and impressario and now will, I am sure, entertain the heavens!

Those few minutes and last ten seconds before the Ball drops each midnight 12/31 is broadcast around the world in all time zones, by various news media, and seen in over 200 countries worldwide, making this a truely global moment and event! But the history of the event underscores its importance and significance.