You can design and create, and build the most wonderful place in the world. But it takes people to make the dream a reality. 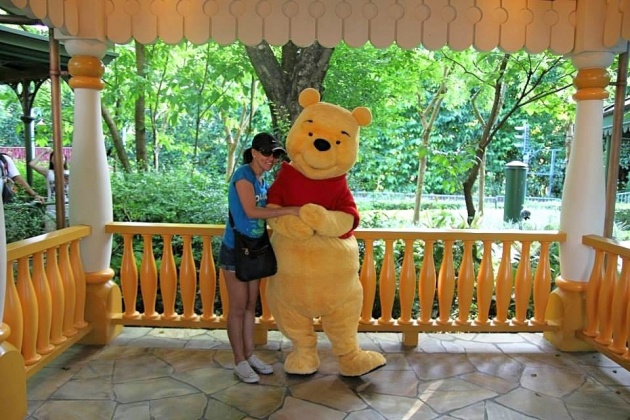 After the make-believe adventure in Fantasyland that ended in one of the Fantasy Gardens at Winnie the Pooh Pavilion, my friends and I proceeded to our journey wherein motion picture adventures are brought to life in an isolated jungle themed area called the Adventureland.

A different adventure as I carry on the fourth part of my blog Hong Kong Disneyland: The Happiest Place on Earth. Following that Fantasyland discussion is the Adventureland where jungle river cruise, a log raft cruise to Tarzan's tree house and getting wet and wild at the water play area for kids and kids alike. Hop on as we sail through the mysterious and untamed river of the Adventureland and be in awe as we pass by the tree house of Tarzan (for real) and how we end our day at the happiest place on Earth. So read on! 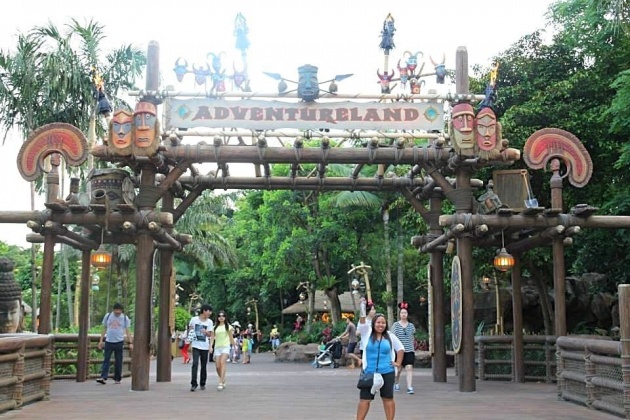 Welcome to the Adventureland Land Area - the home of Disney movies that brought to life. Among all Disneyland Parks, Adventureland in Hong Kong Disneyland is the biggest of all Adventureland. The theme of the Adventureland is comparable to a remote jungle in Asia, South America, Africa and South Pacific. Tribal performance masks, totem poles, and conga drums are 1950's view of exotic adventure aside from the lush vegetation that made it look like a jungle. As per Walt Disney's statement:

"To create a land that would make this dream reality. We pictured ourselves far from civilization, in the remote jungles of Asia and Africa."

Adventureland is also known as home to the "Festival of the Lion King" show, "Frozen" Festival Show, and the soon to be home of the recent hit Disney movie Moana. Soon, "Moana: A Home Coming Celebration"  will be for public viewing anytime this year. 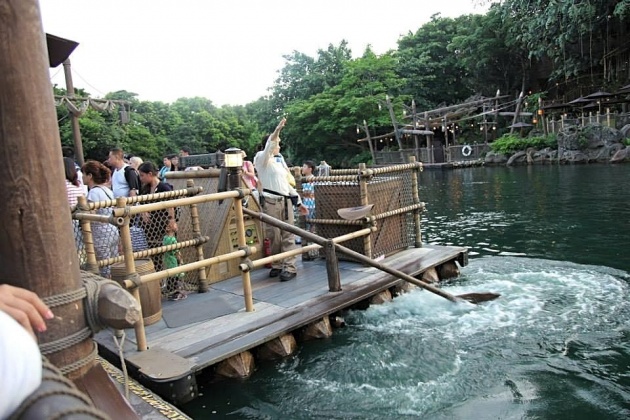 This is the log raft that will transport the guests from the mainland to the other side of the river where the house of Tarzan is nestled. The composition of the log raft is consists of 9 equal-sized logs, pieces of plywoods for the flooring, bamboo poles, large nets and abaca ropes or nylon ropes. The pieces of plywoods are screwed to the nine big logs while the nets are attached to bamboo pieces tied tightly with abaca rope to secure the safety of the railings. 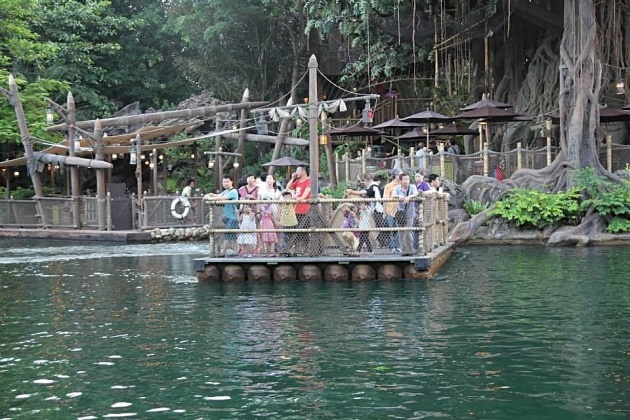 The docking point of the raft is just across the theatre in the wild. This photo conveys the actual docking of the log raft. Once docked, you have an option to stay at the tree house grounds the one with beach umbrellas or climb up the 80-foot-tall tree and begin the storybook journey of Tarzan. 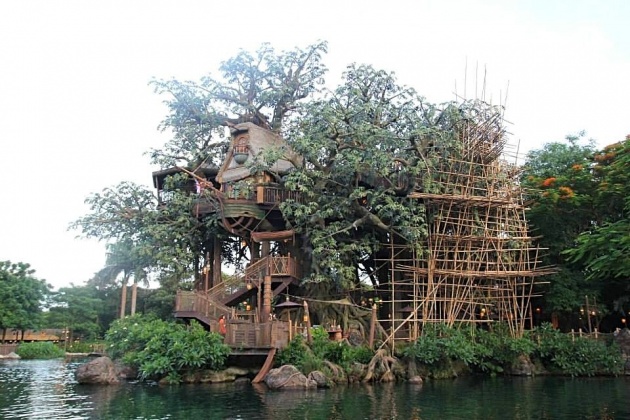 It's a storybook journey of a famous motion picture Tarzan once you climb up the colossal tree. Nestled on top of the tree is a Tarzan Tree house at Adventureland themed area. During our visit, an ongoing construction of the other side of the tree has been started. Bad thing when you are in a group -- not that I don't like them having around but it's when you can't do your own thing just like climbing up the tree because they don't want to (deep sigh). Too bad I wasn't able to see the interior of Tarzan's tree house, I read and heard that it's a fun place with a stunning sight of the Jungle Cruise River and the park. Sigh! 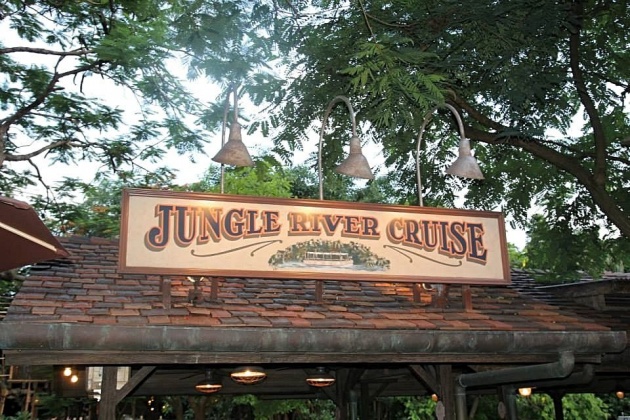 An eight-minute true to life ride along a remote tropical river in Adventureland with a live narration from a lively skipper in three available languages such as Cantonese, English, and Putonghua. The original Jungle Cruise was opened in Disneyland Anaheim California on the 17th of July 1955. Highlights of the ride are: 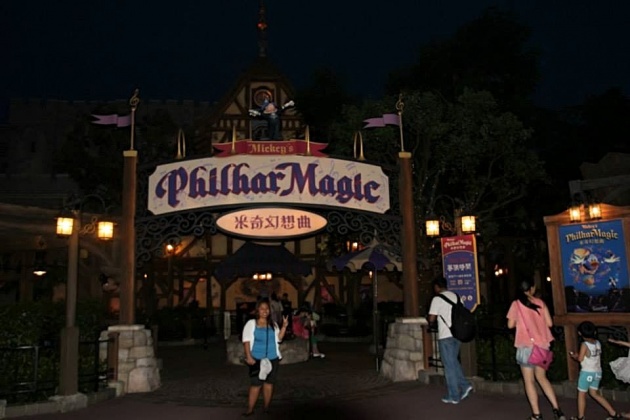 The last attraction we visited was Mickey's Philhar Magic. It's a twelve (12) minute concert movie show in 3D effects, water, scents and some characters from Disney motion pictures that are shown on the purposely-made 3D screen with a width of 150 feet. A place where Disney Magic and Disney Music meet or in simpler context it is a combination of Disney animation and Disney music. Most if not all, Disney's memorable animation soundtracks in movies are played. While humming to Disney's music, you will be transported to a 3D Disney movie settings. Like for instance for the song “Be Our Guest” from Beauty and the Beast, the 3D setting is at the Beast's Dining Hall. For “Part of Your World” from The Little Mermaid, it's Ariel’s Undersea Grotto. “I Just Can’t Wait To Be King” from The Lion King, the setting is Simba’s Africa. From Peter Pan's movie theme song “You Can Fly” the setting was Peter Pan's Nightime London and last but definitely not the least “A Whole New World” from Aladdin, Aladdin’s Agrabah's setting. So delighted to hear some Disney's songs and be enchanted with the magical wonders of Disney.

DISNEY IN THE STARS FIREWORKS 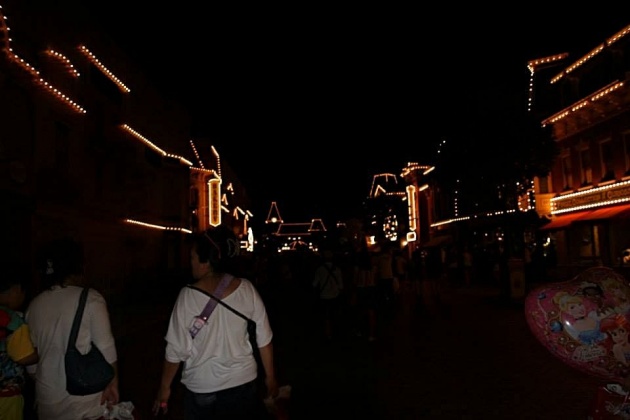 This is how the Main Street USA at night when all lights in the park are off to pave a way to Disney in the Stars Fireworks. It's a nightly show at eight in the evening and people gather in front of the Sleeping Beauty Castle to witness the spectacular fireworks. Each and everyone has its way of securing a perfect spot for the big night. I think it was an hour before (if my memory serves me right) they will turn off all the lights in the park. By then, you must have a secured spot already where you can sit on the ground relax and massage your legs. 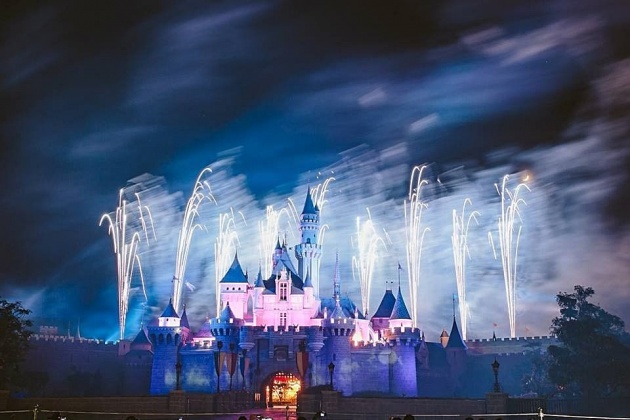 This is how the Sleeping Beauty Castle transformed during the night. A great coordination with the castle's lights and the Disney's famous animation songs followed by an introduction. A whole new world was played as a kick off of the fireworks display. Indeed it was "The Happiest Place on Earth".

Disney in the Stars Fireworks / Video Credit: VFT via Youtube

This video was published a year after my visit to the Hong Kong Disneyland. Nothing is changed from the introduction up until the end. It's a spectacular show with a collaboration of light, sound, music, and pyrotechnic materials. It got me teary-eyed as the introduction begun and hearing the songs of my favorite Princesses shows. It was indeed the happiest way to end the night at Hong Kong Disneyland: The Happiest Place on Earth that I will always treasure. 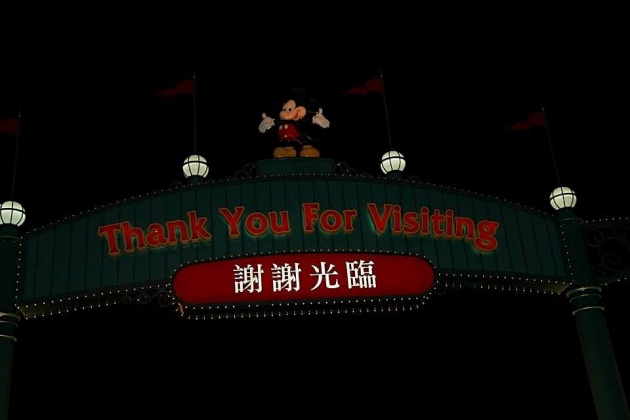 After the Disney in the Stars Fireworks, we stayed a little while to where we're situated. We allow other guests to step out of the park first for a better flow of the walkway. When it was cleared already we then went back to Main Street USA and took the pathway leading us to the Hong Kong Disneyland exit. It was a tiring day but fun-filled adventure. Seeing the exit signage of Hong Kong Disneyland "Thank You For Visiting" made me realized that it's the end of my fulfilled childhood dream. And as I stepped out of The Happiest Place on Earth I promised myself to visit this place again not for myself but for the fulfillment of someone else's childhood dream. I took a pause, look up and mumble "I will leave Today Mickey and soon I will come again into the world of Yesterday, Tomorrow and Fantasy. Thank you and Goodbye. See you next time".

Goodbye may seem forever.
Farewell is like the end,
but in my heart is the memory
and there you will always be.

That's how I end of my Hong Kong Disneyland: The Happiest Place on Earth blog. It feels like time stopped ticking when I was in the park. The day was long but it finally came to an end. Farewell may be the end but deep in my heart memories are well kept until the end.

But there is one more blog related to the latter article which is the Flights of Fantasy Parade and I opted to write it separately since photo attachments are limited. Stay tuned for it and as for now, I will rest my fingers for a day before hitting back the keyboard.

Thank you and happy reading.

My Hong Kong Disneyland: The Happiest Place on Earth blog is incomplete if I missed one of Disneylan…

A continued adventure in Hong Kong Disneyland: The Happiest Place on Earth. Parked my fingers at the…

"People say I still have the innocence of a child. Maybe I have. I still look at the world with wond…

FULFILLMENT OF A CHILDHOOD DREAM

Image Credit: JanneO Do you still remember your childhood dream/s? Have you attainone of those? Or d…