Horrible Bosses 2 – what if the title had been something different? 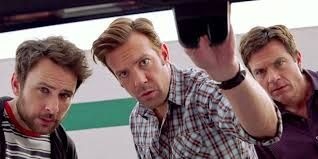 The sequel Horrible Bosses 2 has been receiving mixed reactions at early London previews – from stone-faced silence at one screening (Empire Leicester Square, Tuesday 18 November) to flat out gut-busting guffaws at another (Mayfair Hotel, Sunday 23 November).  A friend of mine had to move from her seat as the gentleman behind her was laughing so hard. There could, of course, have been other reasons.

I was in the not amused camp wishing instead I had been at a livelier screening. I recall, many years ago in 1985, at a Washington multiplex, 20th Century Fox had brought in ‘atmosphere people’ at a Saturday night preview of Bob Clark’s Turk 182, to give us the impetus to giggle. I was unconvinced by the practice at the time – Turk 182 did actually flop – but I can see that a few people providing live canned laughter might actually enhance the experience. Turk 182 was actually previewed on a double bill with Johnny Dangerously, the gangster comedy starring Michael Keaton (pay for one, stay for a second). This gave us value for our dollar even if both films failed to tickle.

In Horrible Bosses, released in 2011, Nick (Jason Bateman), Kurt (Jason Sudeikis) and Dale (Charlie Day) plotted to kill their managers. In the sequel, for reasons which I won’t spoil, kidnapping is the crime of choice. This goes against the normal rule of sequels which up the ante. I wondered whether the writers were hidebound by the title, which meant that they had to repeat certain elements. With a change of one word, we might have seen something different.

In which our trio are all married and find that their wives oppress them as much as their former employers did. They engage MF Jones (Jamie Foxx) to seduce them in order to file for divorce, only one of the wives ends up dead. But is she really and do the three wives have a hidden agenda?

The guys mess with some ‘shrooms’ in this ‘R’-rated Cheech and Chong inspired trip of a movie. They end up on the set of a Children’s TV programme believing they are in a magical land and having to fill in for some aggravated actors (Bradley Cooper, Zach Galifianakis, Ed Helms) to surprise acclaim. Then they have to come down to Earth.

What do you mean, nice bosses? That’s not a suitable title for a comedy. Get back in the hole and come up with something better.

Here, our three heroes find a satchel of material on a corrupt Russian mayor, Vadim (Roman Madyanov), who benefits from shady property deals on the Barints Sea. However, they hand it back to a Moscow lawyer, Dimitri (Vladimir Vdoviche) who takes his part in Andrey Zvyagintsev’s Leviathan.

In which they go into business with each other and lose half a million dollars. Wait - that is actually the plot of Horrible Bosses 2. Nevertheless, putting this movie up against The Hunger Games – Mockingjay: Part One. Was that altogether wise? I could be wrong...