How Did The First Scuba Diving Experience Go? 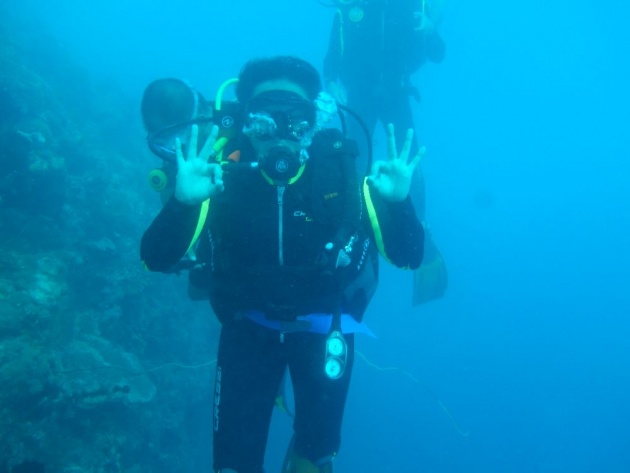 From social media due to the homecoming which occurred last May, I learned that my high school friend has a diving center and is already an instructor. She opened her second diving center in Guindulman, our hometown so it encouraged me to try out scuba diving. I messaged her and we agreed to set an appointment for my first ever scuba diving experience.

Back in high school, I have a schoolmate who transferred to a different school because she applied as a working student to a family. Helen is her name and she had gone through different hardships in life. But all her struggles and efforts had been rewarded and she now reaps the fruit of her labor.

It was after high school when she realized she wouldn't be able to go to college so she applied for a job right away at a resort in the neighboring town known for its beautiful white sand beach and resorts. She was an assistant to the bartender, she had no background for this job but she did everything she can to learn the tricks of bartending and cocktail mixing. She learned to love it that when the main bartender got into an accident, she was forced to be promoted as the main bartender and she was doing very well with the job.

Her employer saw her potential too when they brought her with them during their scuba diving sessions. They were both diving instructors. They soon enrolled Helen for an open diver certification, she passed and became their assistant.

Soon, her employers have to go back to their country but before leaving, they offered Helen a huge opportunity, to pay for her diving instructor studies. Of course, she grabbed it and to make the long story short, she passed it and now runs her own diving center in Panglao and her hometown, Guindulman. Her employers came to visit her and were both happy to know that she had succeeded and is growing her business. 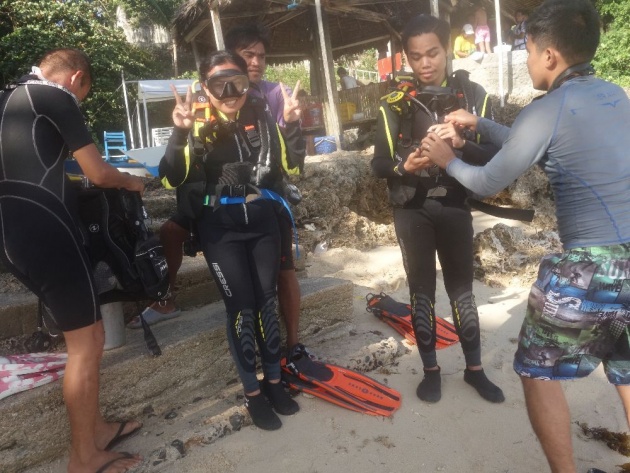 James and I went to the diving center just a few minutes away from my parent's house. Helen and Albert, my high school friends were already waiting for us. I could see some of the pieces of equipment used for diving outside their house.

Not too long after, Helen started the briefing which is the very first step and advised us that this type of scuba diving can only be done with the assistance of a professional instructor. There are different levels of becoming an open diver certification and this is the first. If we would like to continue for the certification, we have to set up appointments for the next three further dives that would cost few more thousands of pesos though.

Included during the briefing was the restrictions while scuba diving and these were the following: 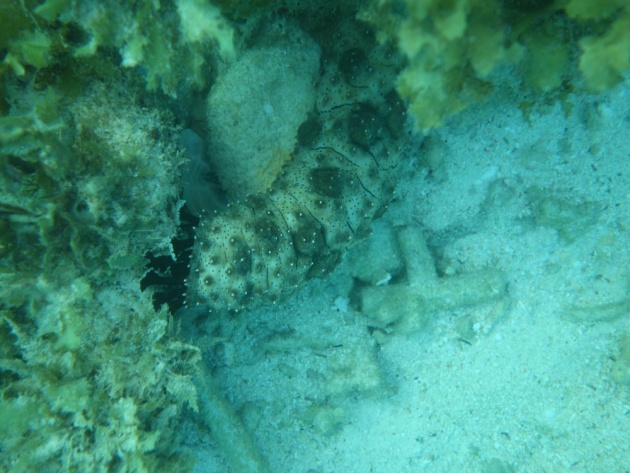 - the diver should stay close with the instructor, we should always be conscious of the presence of our companions especially that there's a chance that we might get lost while underwater

- divers shouldn't touch any coral or creature while diving. Some of the corals may actually have properties which will either burn or cut any part of the body

- learn the hand signs and signaling used for communicating while driving. There were signs used to tell how much air is left in the tank by looking at the gauge

- know the parts of the gear used for diving such as the air tank, the first stage regulator, primary second stage regulator, the alternate second stage and the buoyancy control device jacket which is used to enable the diver to go down or up while underwater which is also referred as Low-Pressure Inflator Hose and most importantly our submersible pressure gauge and console 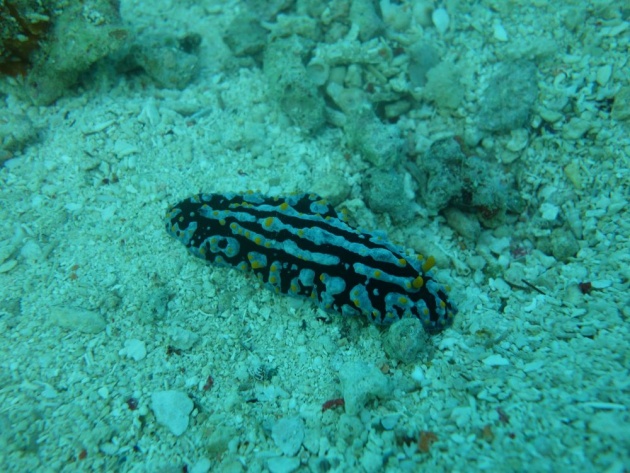 I could only remember these list but I believe there were still more things she dealt with. She also taught us how to clear the water that gets into the mask and the ventilator. It was easy to follow the steps in clearing the mask while I could hardly remember how to do so for the ventilator but it was similar to when clearing water in a snorkel.

Right after the briefing session, Helen then gave us a questionnaire to test if we were paying attention to her talk. We both got perfect scores and that we signed the document.

It was almost eleven in the morning when we went to Coco White Sand Beach where we will be scuba diving but when we arrived, the beach water was rough, waves were gigantic and they were crashing into the beach stone walls.

The seawater was also dark because it rained the night before so we decided to just wait for the low tide. It was 11 in the morning when we arrived and it was already three in the afternoon when the beach shoreline was visible, it was about low tide and we can surely start the diving session.

So it was a good four hours of waiting, we had an impromptu lunch at the beach and even talked about a lot of things and played catch up too about each of our lives. 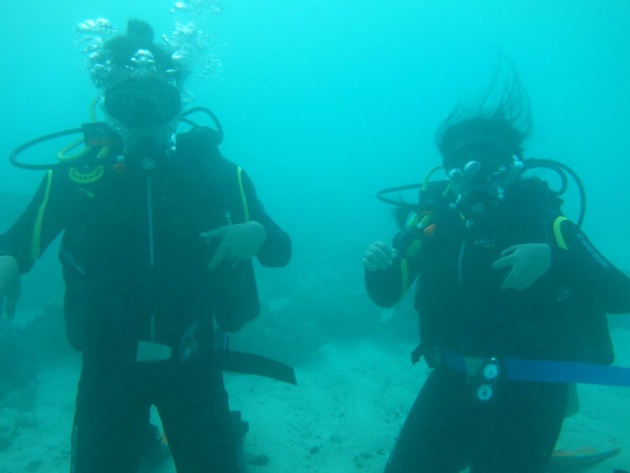 When the water was already starting to show the shore and we were all ready to dive, we attached our weights, the BCD and all the gears needed for scuba diving, I also started breathing through the regulator. James and I walked backyards toward the sea, we floated for a while until we get used to breathing and soon enough, we were already underwater.

I thought I was just dreaming, the assistants were holding me but they let me go after a while. We swam into the underneath and spotted a lot of corals and fishes. I was very conscious with my flipping and my breathing that I couldn't focus on looking at the different corals in the seawall. 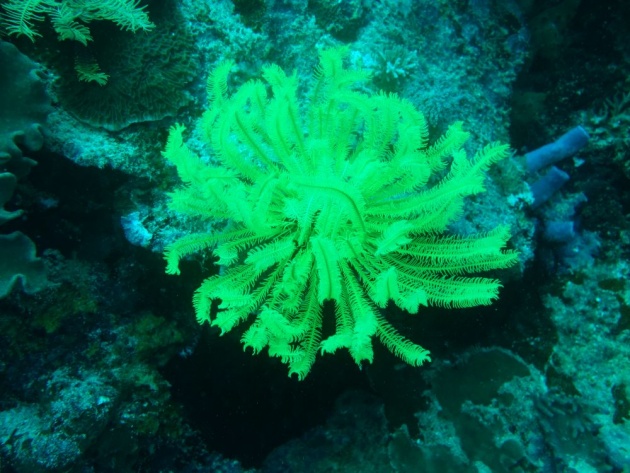 The seawall was actually a cliff underwater, I could see the dark areas under which made me feel nervous but I was really confident with my instructor. She lead us to where we should be going, she also hand-signaled if I needed to go down a bit and also guided me in clearing the water inside my mask. 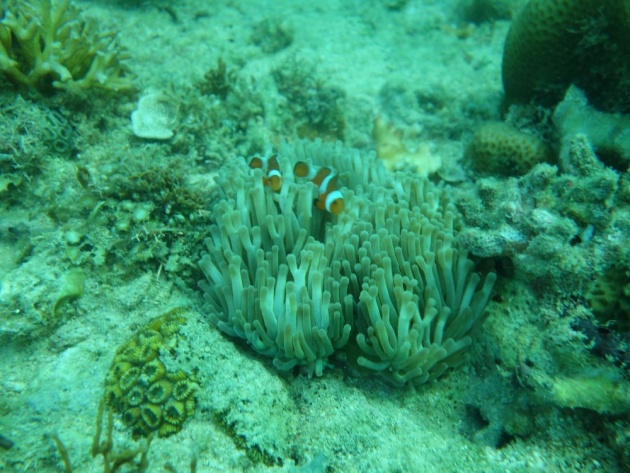 Ear pain is normal in diving and I had to stabilize myself a couple of times. Good thing I was a little good at it, every single meter that we go down, the pressure would hurt me but I can stabilize it by pinching my nose and exhale.

We reached 11 meters underneath, max would be 12 meters.

Underwater Life And Garbage Underneath 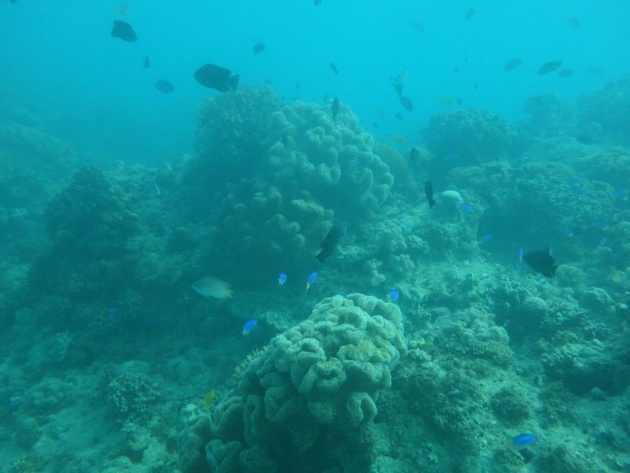 It made me glad about seeing a lot of corals and different types of fishes. We even saw a sea snake sleeping under a coral stone but I guess Helen forgot to take a photo of it.

Aside from that, we found a frogfish which was also sleeping, a lionfish, Ocellaris Clownfish were abundant, living in a soft coral swinging their way and were kind of protective to their home. Blue and green, as well as yellow fishes, were spotted but I couldn't figure out what kind of fishes were they.

Helen saw a swimming turtle above us but I missed it, unfortunately, a big-sized shell was also spotted and some snails with cool colors. There were different corals in the seawall and I really wished we could go down a bit more but it was not anymore advisable. 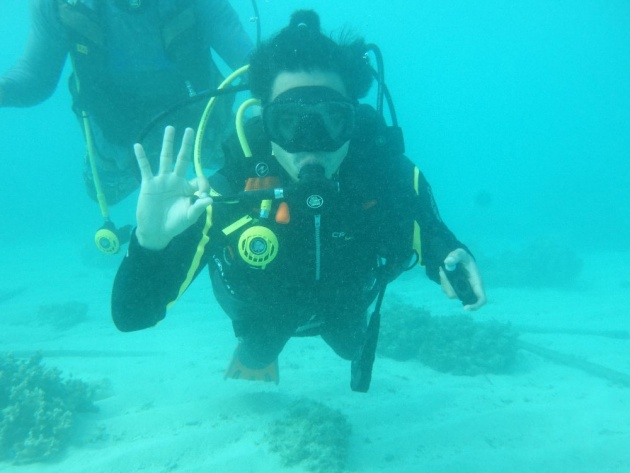 When we were on our way back, I found some garbage and rubbish items which looked seemed to be staying in the seabeds for quite some time already. It made me cringe to see some fishing items, some plastic bottles and I wish I had the ability to take them out of the sea. I noticed the corals were starting to be scarce as we reach the shallow area. Perhaps in the future, once I get used to diving, I can also help in cleaning up the sea and the ocean. For now, I will surely do my best to be responsible for my trash. 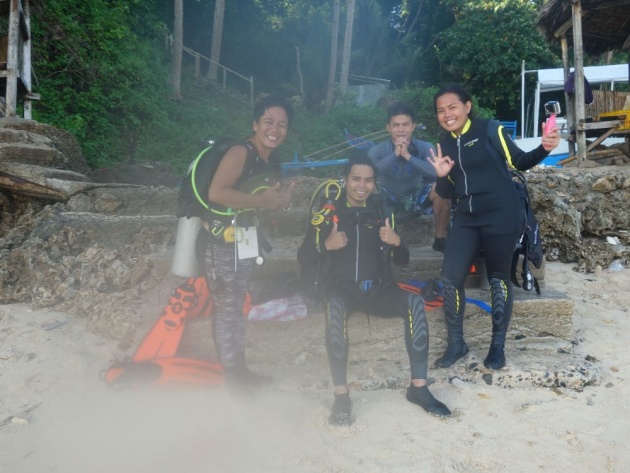 It was a good dive, although it took some time for us to dive, it was still worth it. I will surely be diving soon, perhaps in Panglao because they got cool diving sites over there too!