Converting Uranium into Other Elements 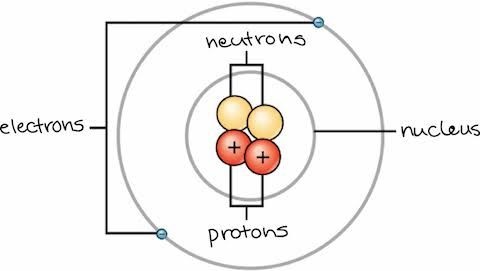 Particles in an atom (electrons, protons, neutrons) are held together by different types of forces in balance. One can weaken or strengthen these forces by either fission (splits nucleus) or fusion (combines nucleus) reactions. These reactions are used for nuclear power (eg: in engines or electricity).

In nuclear fission, a very large element, such as uranium-235--used in fission bombs, undergoes reaction with a neutron to split into different types of smaller elements and other fission products such as radiation, Iodine-131, Strontium-90 and Cesium-137. Radioactive decay means an atom splits and emits radiation.

Radiation (also called electromagnetic radiation) is all around us. Without it, life wouldn't thrive on earth. The sun is a good example: it emits light rays for plants and living beings to live. Other examples are radiation used in medicine and telecommunications. Without them, our way of living wouldn't be the same--it would make it primitive.

Electromagnetic (EM) radiation is the movement of energy - through space or a medium - composed of both electric and magnetic waves.

All radiation have this so-called packet of energy (photons) that can behave like waves (no "rest" mass) or particles (have mass) or both, simultaneously. If it, as an example, acts as waves, we have microwaves. If particles, the sun rays can excite plant cells in photosynthesis. Energy in photons might be weak (long wavelength) or strong (short wavelength). 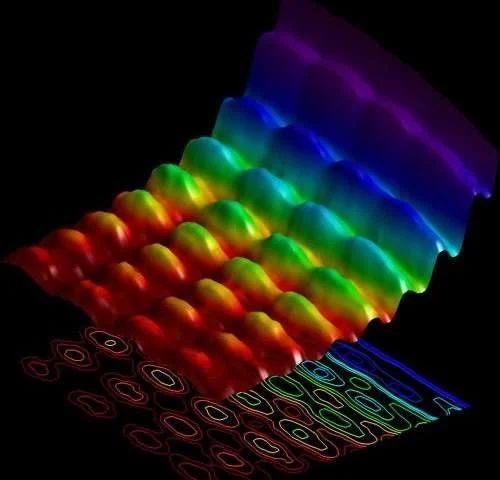 Image of photon as particle and wave. Photo credit: phys.org

Ray can be a shorter term for radiation.

There are 2 types of radiation: non-ionizing and ionizing. In non-ionizing radiation, energy emitted are weak that it can't completely remove electrons from an atom (eg.: radiowaves). 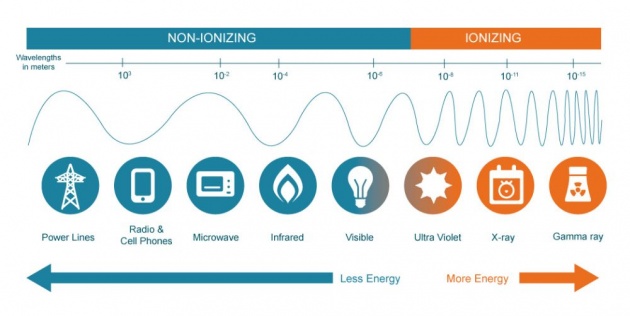 In ionizing radiation, the emitted rays can cause other atoms to loose electrons or neutrons, and become unstable and have charge (ions). Ionized rays come from already unstable atoms that have absorbed much energy and/or mass.

There are 3 types of (direct) ionizing radiation: alpha, beta, and gamma radiation. 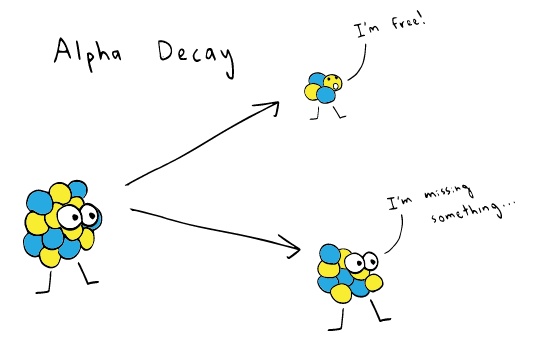 Alpha particles are formed when an unstable atom form one group of nucleus (mother nucleus), and another smaller group of protons and neutrons (daughter nucleus). This daughter nucleus have 2 protons and 2 neutrons, which is the alpha particle, and is similar to a Helium cation. Because these particles travel at a short distance and are larger than other solid molecules, a piece of paper can block their movement.

Alpha particles are innocuous but they're insidious if they enter our bodies. The best way is to cover bodily openings by masks, ear plugs and goggles. 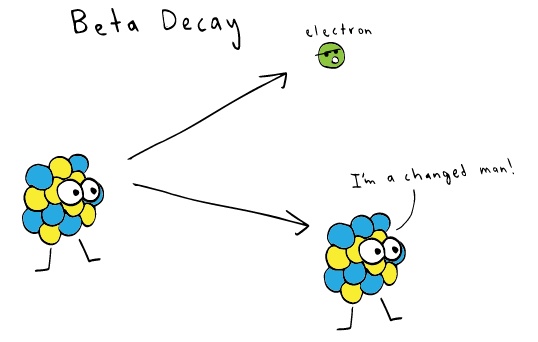 Beta particles are fast moving electrons or positrons emitted by unstable atoms. They are formed from converting neutron or proton into electron or positron, respectively, by high energy. Some beta particles can be stopped by proper clothing or simply by a tin foil. They are also harmless but can pose a threat if it gets inside the body, so ready your N95 masks. 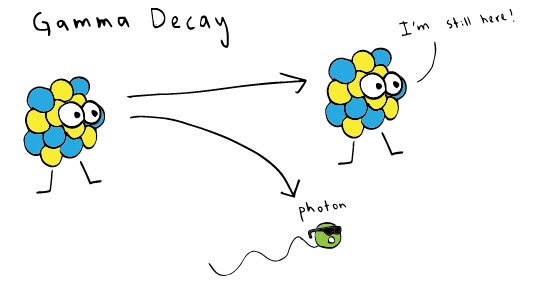 In a gamma ray, the atom retains all its subatomic particles, but these particles rearrange into low energy configuration, so the excess high energy (photon) gets released. These photons are what makes up gamma rays. Gamma radiation is the most lethal type of direct ionizing radiation because it penetrates in the deep layers of the skin. Our cells absorb this ray, where it destroys our DNA and makes us ill. It can be stopped by about 1.3ft of lead, 6.6ft of concrete or 13.1ft of water.

Iodine-131 is composed of 78 neutrons and 53 protons, hence the name (sum of protons and neutrons). The thyroid gland, located at the throat, has a behavior wherein all iodine taken in by the body will be absorbed by it. Radioiodine is used in radiation therapy for hyperthyroidism in smaller doses, but a large dose poses instant cancerous threat in this butterfly-shaped gland. 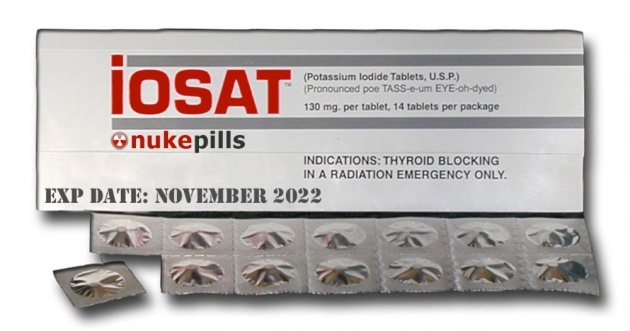 The best way to avoid absorption of Iodine-131 is by filling the thyroid with generally harmless iodine. For adults (19-40y/o) 130 mg of iodine is the dosage needed to fill it up, while for children (3-18, <70kg) it is 65mg. Do remember that Iodine-131 has a half-life of only about 8 days, so it's best to take the pill for about 1 week to minimize absorption.

Strontium-90 is a radioisotope that has a half-life of about 29 years. It has 52 neutrons and 38 protons, so the name. This radionuclide has similar characteristics with calcium: it enters the bones and "calcifies." The body cannot distinguish between calcium and Strontium-90 so it's very dangerous if you're exposed to it, because it emits radiation for a long time. Only 30% is absorbed by the bones, but it's still alarming because you can still have bone diseases. 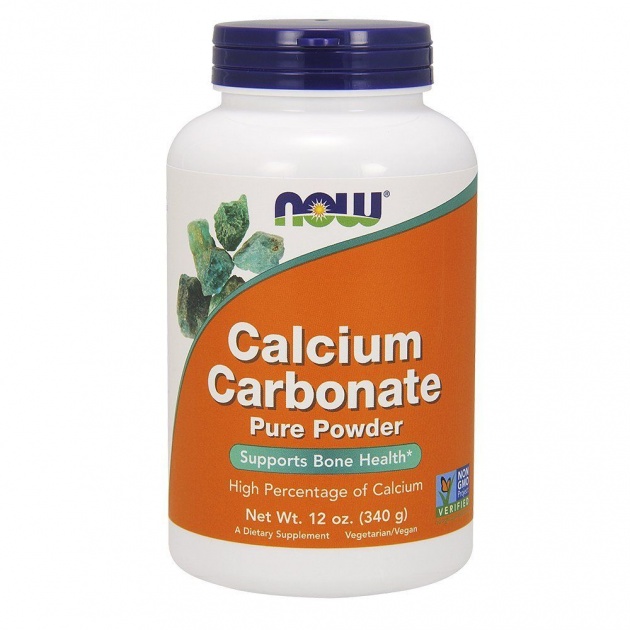 Just like our thyroid glands, it can be remedied by taking the recommended dosage of what the bone absorbs: calcium. Calcium carbonate is effective in minimizing strontium-90's absorption by the body. CaCO3 contains 40% calcium so 2 1/2 500mg pills of CaCO3 (for 19-50y/o) is needed to take until the threat subsides (but its best to get calcium from uncontaminated food, like milk).

Cesium-137 has a 30-year half-life. 82 neutrons and 55 protons comprise of this radioisotope. It can easily be dispersed through air and it quickly dissolves in water (vapors, rain, rivers, etc...) so it is highly dangerous. Luckily, cesium-137 is only artificially made; this radioisotope isn't found originally in nature. 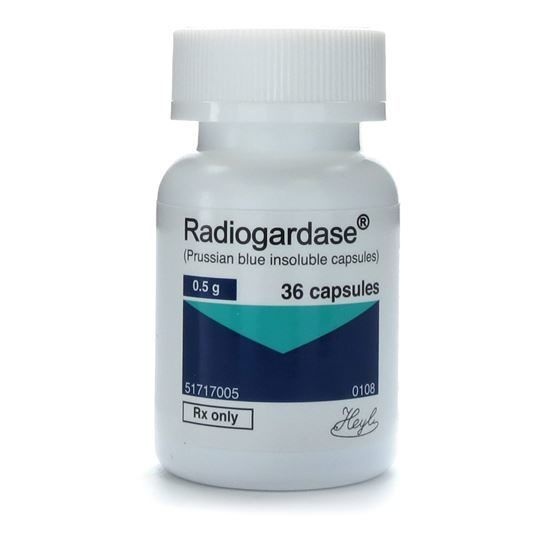 Radiocesium behaves like potassium (an electrolyte) in the body, so it may affect the heart, soft tissues and some bodily fluids. It can cause bone marrow disease, like leukemia, and other forms of cancer. Prussian blue, or also known as ferric ferrocyanide, is used to counter absorption of cesium-137. Dosage varies for adults: either 1-3 grams/day or 10-12grams. 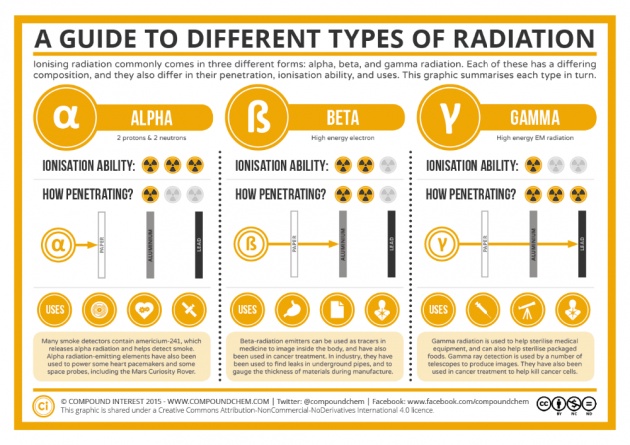 We need to protect ourselves from harmful radiation by covering our openings with either masks, plugs, clothes, and thick walls of concrete and/or lead. If we're exposed to Iodine-131, Strontium-90 and/or Cesium-137, it's our priority to take Potassium iodide, Calcium carbonate and/or Prussian blue, respectively, at recommended dosages. Understanding how things react and influence other things is helpful in preventing bad outcomes.

Disclaimer: Information stated in this blog post are for educational purposes only. Seek advise from an expert in the given field. Consult your physician for any medical advice. Writeup made by lapiz-lazuli.

An atom consists of negatively charged electrons bound to a core of positive charge. The positive co…

How Global Warming Can Be Reduced

PRODUCTION AND PROPERTIES OF X RAYS AND THEIR USES

X rays are the special type of radiation and also known as high power penetrating radiation. They ar…