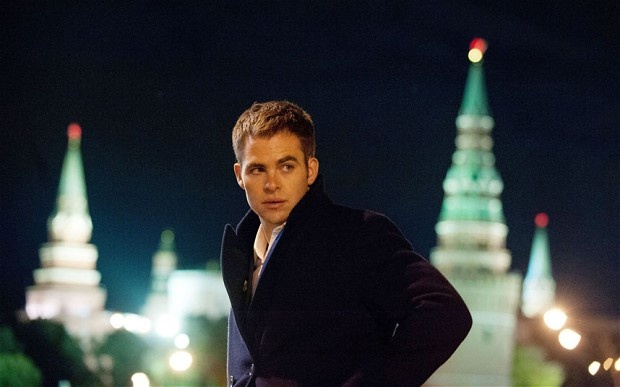 When a film destined for a December release doesn’t appear until January, you know it is in trouble. JACK RYAN: SHADOW RECRUIT is 105 minutes of an almost movie. Good cast, good locations, moderately intelligent plot, but it isn’t quite there. If I’m not mistaken, director Kenneth Branagh has already completed principal photography on his next film, a live action of CINDERELLA for Disney – CGI pumpkin carriages are being worked on as I write. There is no fairy tale ending here. A less than stellar opening has led to it be trounced by the Tim Story action comedy RIDE ALONG (cop Ice Cube puts rookie Kevin Hart through the mill for dating his sister – we know how that will turn out). I imagine that Branagh was summoned before the executives of Skydance to account for an underwhelming final cut. What did he say? The conversation might have gone something like this.

KB: You wanted to see me.

KB: Like the critics of my film of THE MAGIC FLUTE.

Mr A: Mr Brenner. We have a problem.

KB: It’s Bran-agh, but call me Ken. Everybody does.

Mr B: Mr Brenner. Where is your four leaf clover?

KB: Mind if I pour myself a drink?

Mr A: You can pour. Just don’t drink.

KB: Ah, like alcohol consumption in the movies. It’s funny how movies always end with a statement that tobacco companies did not endorse the content of a film but alcohol producers get off scot free. And as for coffee producers –

Mr B: Mr Brenner. We’ve seen your rough cut of JACK RYAN. We are not impressed.

Mr A: A beginning that doesn’t tie to the plot, middle, and another middle. Where’s the climax?

KB: You’ve seen the film. A big explosion, then the postscript.

KB: Well, I could get the CGI people to amplify the explosion. As it is, the bridge doesn’t shake. I thought you were going to say something about the lack of damage to the subway system.

Mr A: It hasn’t tested well.

KB: Well, a threat to the financial district of a major city was always going to be risky. You have to judge it just right.

Mr A: Is that why the extras watching the Twin Towers fall are so limply directed?

Mr B: We need to see more of Jack training, to prepare for a little more action. As it is, I think the sleeper agent could take him.

Mr A: Couldn’t Kevin Costner come in at the end? I thought he should have taken a bullet.

Mr B: He should have taken a bullet for THE POSTMAN.

KB: Acting and directing in a big budget motion picture is a tricky undertaking.

Mr A: He has a big film with McG on the way.

Mr B: I thought you were going to go all Shakespearean on us. You have that reputation.

Mr A: No, it’s more faraway looks in Nordic locations.

Mr B: I didn’t think WALLANDER was on any more.

KB: All of us have moved on. I am in the middle of another picture. Keira’s just got married and looking for a film to complete her Russian trilogy. Kevin’s back on his ranch.

Mr B: I didn’t know he endorsed dressing – I thought that was Newman’s bag.

Mr A: Mr Brenner, Jack Ryan’s wife in the earlier movies is Claire. Here she’s called Cathy. So they are clearly not going to marry. There’s scope to give Chris and Keira a really big emotional scene, like at the end of ON HER MAJESTY’S SECRET SERVICE.

KB: I signed on for the reboot of a franchise. Not to pay homage to the most wooden of Bonds.

Mr B: How about – and I’m just spit-balling here – Cathy dies half way through and then talks to Ryan through a portable device.

Mr A: She’s an artificial presence in HER. Not a dead person.

Mr B: I’m a frustrated scriptwriter.

KB: Yes, Hollywood films can be terribly predictable. You don’t have to kill off a character at the end of Act Four, or Act Two if you’ve read a different screenwriters’ manual.

Mr A: Know what I also miss? There’s no James Earl Jones.

KB: It’s a reboot. Besides we have a heavy set guy from Uganda who intends to assassinate Ryan in his hotel suite.

Mr B: There’s got to be a point in which Jack wonders about the team he has joined. People are sceptical about intelligence gatherers after Snowden.

KB: Edward Snowden wasn’t foreseen when we developed the script. Besides most intelligence analysts are patriots. They don’t cut and run and go to Russia to seek refuge.

Mr A: Maybe that’s what we need to do. Make a JACK RYAN film post-Snowden.

Mr B: Ryan’s colleague sells America out to the Russians. Ryan investigates.

KB: I’m in the middle of a feel good fairy tale women’s picture –

Mr B: ‘Cause that’s what you Brits are good at.

Mr A: Are you telling us to cut our losses?

KB: I should just let you talk to each other. A two hander! Yes, I could remake my remake of SLEUTH. How about it fellas?

Mr A: Something about your cut bugs me. Before Jack fights his driver in his room there are no chocolates on the bed. Then, when it is fixed by the CIA clean up team, there are chocolates. Does the Central Intelligence Agency have shares in Hotel Chocolat?

Mr B: Maybe they took them from another room.

Mr A: Do you think they attacked the cleaning woman who did not hear the fight?

The two executives are left to their conversation as KB leaves.