Accusation, blaming, allegation, taking/giving credit, these are some of the terms I would be highlighting in this blog. The word 'credit' reminds me of the famous quote by 'Indira Gandhi', which is stated as

'There are two kinds of people, those who do the work and those who take the credit. Try to be in the first group; there is less competition there'.

A great lesson to learn from, only if someone is willing to understand and use it in daily life, alas, it's only confined to reading purposes only. The Arabic word for blaming or false accusations is "Buhtaan", the act of accusations is strictly prohibited in our religion. There is a plethora of the particular elements with today's generation, what agitates me is the outcome of the false accusations that are used so abundantly, it clearly destroys lives deeply, its impact is so menacing that sometimes many people aren't able to overcome its effect. 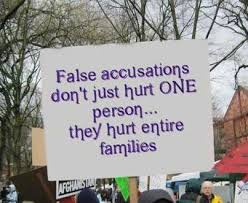 In almost all societies taking credit for good and blaming others for bad is very common. "Accused", the person who is falsely accused of an offence (major or minor) will never recover from the serious damage that the accuser does to his reputation, even though if the accuser is proven to be false yet the society will always have a thought of the particular accusation back in their minds against the one accused. "Complainant", its a legal term generally used after allegations made. The accuser in major situations after falsely accusing someone else wants some kind of retribution and what happens is, ''it is followed by a long series of lies that results in catching up with the false accuser who has lied about the accusation in the first place, this whole lies and blame-game creates a "snowball effect".

Whatever the outcome is, it's consequences are too negative particularly for the one accused probably because it's stuck to them their whole life both within themselves and outside by the society resulting in losing friends and families, even though sometimes the reality comes out but by that time it's already too late.