The objective of the control system is to balance the inverted pendulum  by applying a force to the cart that the pendulum is attached to. It is unstable without control, so we learn how we can balance pendulum through control system. 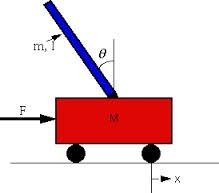 We analyize our system by

We will  examine how the system responds to an impulsive force applied to the cart, for this we use commands in matlab.and we examine that the system response is entirely unsatisfactory. In fact, it is not stable in open loop.

Now we can begin to tune our controller. response of the closed-loop system to an impulse disturbance is still not stable. Let's begin to modify the response by increasing the proportional gain we get the response plot shown below

the steady-state error approaches zero in a sufficiently fast manner, no additional integral action is needed. we can set the integral gain constant to zero to see  some integral control is needed. After some trial and error it is found that a derivative gain of 20 provides a satisfactory response.

As you can see, the overshoot has been reduced so that the pendulum does not move more than 0.05 radians away from the vertical. Since all of the given design requirements have been met, no further iteration is needed.

Whats happen to the cart's position :

The block representing the response of the cart's position  was not included because that variable is not being controlled. It is interesting though, to see what is happening to the cart's position when the controller for the pendulum's angle  is in place. To see this we need to consider the full system block diagram as shown in the following figure.

Adding the following commands to your m-file (presuming    and  <img src="data:image/png;base64,iVBORw0KGgoAAAANSUhEUgAAAB0AAAAPCAYAAAAYjcSfAAADH0lEQVQ4EX1Vyyv8URQ/Mz/EwlhImmKFjPIqYSPJI2uSjRKRLBQSGxazGytk4R+gFEJICSnkbRazxELWipBH4fzO59S5vxmP36nv3Hs+533OvXeIo+jj4yOK+31reuvr67yysqKKn5+f3wwM6+jo4OfnZ6cXR0LCkcfjIa/XS+fn5zQ1NUV+v1/xgoICqqyspJmZGRoaGlIMek9PT3R9fU0tLS1wofa6+eGnrq6OmpubaWlpieLiJKRlg+w7Ozu5vb2dJbDLen5+ntPT01mMFHt/f9e1q6uLj4+PdW8+zAi8YdaV8fFxnpycVBVkrlReXs4QGMHIApSUlP

Co-Education and its Benefits