Islam (/ˈɪslɑːm/;[note 1] Arabic: الإسلام‎, al-ʾIslām IPA: [alʔisˈlaːm] ( listen)[note 2]) is a monotheistic and Abrahamic religion articulated by the Qur'an, a religious text considered by its adherents to be the verbatim word of God (Allāh), and, for the vast majority of adherents, by the teachings and normative example (called the sunnah, composed of accounts called hadith) of Muhammad (c. 570–8 June 632 CE), considered by most of them to be the last prophet of God. An adherent of Islam is called a Muslim(sometimes spelled "Moslem").[1]

Muslims believe that God is one and incomparable[2] and that the purpose of existence is to worship God.[3] Muslims also believe that Islam is the complete and universal version of a primordial faith that was revealed many times before through prophets including Adam, Noah, Abraham, Moses, and Jesus.[4] Muslims maintain that the previous messages and revelations have been partially misinterpreted over time,[5] they are nevertheless all obliged, according to the Qur'an, to treat the older scriptures with the utmost respect.[6]

As for the Qur'an, Muslims consider it to be both the unaltered and the final revelation of God.[7] Religious concepts and practices include the five pillars of Islam, which are obligatory acts of worship, and following Islamic law, which touches on virtually every aspect of life and society, from topics ranging from banking and welfare, to family life and the environment.[8][9]

The expansion of the Muslim world involved various caliphates and empires, traders and conversion to Islam by missionary activities.[10] Most Muslims are of twodenominations:[11][12] Sunni (75–90%)[13] or Shia (10–20%).[14] About 13% of Muslims live in Indonesia,[15] the largest Muslim-majority country, 25% in South Asia,[15] 20% in the Middle East,[16] and 15% in Sub-Saharan Africa.[17] Sizable Muslim communities are also found in Europe, China, Russia, and the Americas. Converts and immigrant communities are found in almost every part of the world.

With about 1.6 billion followers or 23% of the global population,[18][19] Islam is the second-largest religion by number of adherents and, according to many sources, thefastest-growing major religion in the world.[20][21][22]

The dome of the Carol I Mosque in Constanța, Romania, topped by the Islamic crescent
Islam is a verbal noun originating from the triliteral root s-l-m which forms a large class of words mostly relating to concepts of wholeness, submission, safeness and peace.[23] In a religious context it means "voluntary submission to God".[24][25] Islām is the verbal noun of Form IV of the root, and means "submission" or "surrender". Muslim, the word for an adherent of Islam, is the active participle of the same verb form, and means "one who submits" or "one who surrenders". Believers demonstrate submission to God by serving God, following his commands, and rejecting polytheism. The word sometimes has distinct connotations in its various occurrences in the Qur'an. In some verses, there is stress on the quality of Islam as an internal conviction: "Whomsoever God desires to guide, He opens his heart to Islam."[26] Islam, by its own inner logic, embraces every possible facet of existence, for God has named Himself al-Muḥīṭ, the All-Embracing.[27]

Other verses connect Islām and dīn (usually translated as "religion"): "Today, I have perfected your religion (dīn) for you; I have completed My blessing upon you; I have approved Islam for your religion."[28] Still others describe Islam as an action of returning to God—more than just a verbal affirmation of faith.[29] In the Hadith of Gabriel, islām is presented as one part of a triad that includes imān (faith), and ihsān (excellence), where islām is defined theologically as Tawhid, historically by asserting that Muhammad is messenger of God, and doctrinally by mandating five basic and fundamental pillars of practice.[30][31]

Anbiya are considered prophets of the past in Islam.[54]
Main articles: Prophets in Islam, Sunnah and Hadith
Muslims identify the prophets of Islam (Arabic: أنۢبياء‎ anbiyāʾ ) as those humans chosen by God to be his messengers. According to the Qurʼan, the prophets were instructed by God to bring the "will of God" to the peoples of the nations. Muslims believe that prophets are human and not divine, though some are able to perform miracles to prove their claim. Islamic theology says that all of God's messengers preached the message of Islam—submission to the will of God. The Qurʼan mentions the names of numerous figures considered prophets in Islam, including Adam, Noah, Abraham, Moses and Jesus, among others.[55]

Muslims believe that God finally sent Muhammad as the last law bearing prophet (Seal of the Prophets) to convey the divine message to the whole world (to sum up and to finalize the word of God). In Islam, the "normative" example of Muhammad's life is called the Sunnah (literally "trodden path"). Muslims are encouraged to emulate Muhammad's actions in their daily lives and the Sunnah is seen as crucial to guiding interpretation of the Qur'an.[56] This example is preserved in traditions known as hadith, which recount his words, his actions, and his personal characteristics. Hadith Qudsi is a sub-category of hadith, regarded as verbatim words of God quoted by Muhammad but is not part of the Quran.

A hadith involves two elements- a chain of narrators, called sanad, and the actual wording, called matn. Hadiths can be classified, by studying the narration, as "authentic" or "correct", called Sahih (Arabic: صَحِيْح‎), "good", called Ḥasan (Arabic: حَسَن‎) or "weak", called Ḍaʻīf (Arabic: ضَعِيْف‎) among others. Muhammad al-Bukhari[57] collected over 300,000 hadith, but only included 2,602 distinct hadith that passed the tests that codified them as authentic into his book Sahih al-Bukhari,[57] which is considered by many to be the most authentic source after the Quran.[58][59]

Resurrection and judgment
Main article: Qiyama
Belief in the "Day of Resurrection", Yawm al-Qiyāmah (Arabic: يوم القيامة‎) is also crucial for Muslims. They believe the time of Qiyāmah is preordained by God but unknown to man. The trials and tribulations preceding and during the Qiyāmah are described in the Qur'an and the hadith, and also in the commentaries of scholars. The Qur'an emphasizes bodily resurrection, a break from the pre-Islamic Arabian understanding of death.[60]

On Yawm al-Qiyāmah, Muslims believe all mankind will be judged on their good and bad deeds and consigned to Jannah (paradise) or Jahannam (hell). The Qurʼan in Surat al-Zalzalah describes this as, "So whoever does an atom's weight of good will see it (99:7) and whoever does an atom's weight of evil will see it (99:8)." The Qurʼan lists several sins that can condemn a person to hell, such as disbelief in God (Arabic:كفر‎ kufr), and dishonesty; however, the Qurʼan makes it clear God will forgive the sins of those who repent if he so wills. Good deeds, such as charity, prayer and compassion towards animals,[61][62] will be rewarded with entry to heaven. Muslims view heaven as a place of joy and bliss, with Qurʼanic references describing its features and the physical pleasures to come. Mystical traditions in Islam place these heavenly delights in the context of an ecstatic awareness of God.[63]

Divine will
Main article: Qadar
The concept of divine will is referred to as al-qadā wa'l-qadar (Arabic: قدر‎), which literally derives from a root that means to to measure. Everything, good and bad, is believed to have been decreed.[67]

Five pillars
Main article: Five Pillars of Islam
The Pillars of Islam (arkan al-Islam; also arkan ad-din, "pillars of religion") are five basic acts in Islam, considered obligatory for all believers. The Quran presents them as a framework for worship and a sign of commitment to the faith. They are (1) the creed (shahadah), (2) daily prayers (salat), (3) almsgiving (zakah), (4) fasting during Ramadan and (5) the pilgrimage to Mecca (hajj) at least once in a lifetime if you are financially and physically able to.[68] Both Shia and Sunni sects agree on the essential details for the performance of these acts.[69]

Silver coin of the Mughal EmperorAkbar with inscriptions of the Islamic declaration of faith
Main article: Shahadah
The Shahadah,[70] which is the basic creed of Islam that must be recited under oath with the specific statement: "'ašhadu 'al-lā ilāha illā-llāhu wa 'ašhadu 'anna muħammadan rasūlu-llāh", or "I testify that there is no god but God, Muhammad is the messenger of God."[71] This testament is a foundation for all other beliefs and practices in Islam. Muslims must repeat the shahadah in prayer, and non-Muslims wishing to convert to Islam are required to recite the creed.[72] 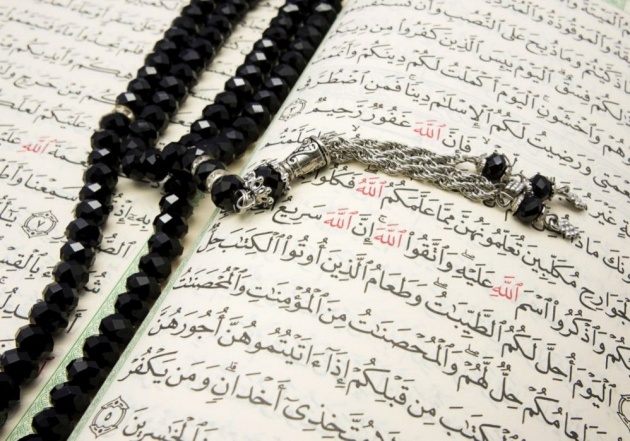