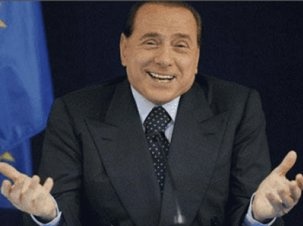 After years of financial and political turmoil in Italy, I am struggling to find an explanation as to how millions of fellow Italian citizens like me lost control of the situation. Out of frustration, I even proposed to hand Italy to the Danish: www.facebook.com/pages/LItalia-ad-i-Danesi-Italy-to-the-Danish/242090832508740?sk=info But I must admit that blaming Berlusconi is a short cut. After reading a blog report by NICOLE WINFIELD, I got the goose bumps. Italy is one of the the most densely populated countries in the world and in particular on the Mediterranean Sea. I call it the United States of Italy because it's composed of hundreds of cultures and dozens of different dialects. Italy was unified in 1861, only 7 years before the New York Athletic Club was founded in NYC, where I train at and teach Judo 3 times a week. Look at all those countries that face the Mediterranean Sea and cook with Olive Oil and tell me what country is reliable, functional and efficient. None with the exception of France, which has its center in Paris and is more of a Northern European City rather than a Mediterranean city. In fact French cook with Butter, not Olive Oil... Also, imagine spending a weekend with a group of Spaniards, Greeks, Turks, Israelis, and Italians versus spending a week with the Germans, Dutch, Danish and English. You know that the Mediterraneans will bring to the table funnier and dirtier jokes as well as outdoor games and great food, while the Northern Europeans will need a good amount of Beer to get cheery and outgoing. But on Monday, the Northern Europeans will have a functional approach to work and politics, while the Mediterraneans will keep up with their fun life style getting distracted over other matters and try to figure out how they can get out of paying their taxes or pay less than they should. Just spend a summer in Italy and see what happens at 11 pm in the piazzas, when the Italian kids are still running around playing games and eating Ice Cream (bouncing off the walls) while in Anglo-Saxon countries even adults get to bed at 9 pm. The only thing that can save Italy, and consequently Europe and the rest of the Western World from a deep deep financial crisis, is to maintain a solid Europe in which each region can learn from each other. And for those who cheer for a divided Europe, please invite them to visit me at my Judo practice! francescorulli.com/films/movie/francesco-rulli-judo-highlights/28596 Jeremy Rifkin wrote a great book called The European Dream that I suggest everybody to read, not only for its content, but for the fact that it was written by an American who understands that looking over the other side can open people minds. Italy has 26% Self Employment rate, USA has 7% and France has 9%, and deep in its heart every Italian is a little Berlusconi (that is why we dealt with him for so long). www.cepr.net/index.php/publications/reports/int-comp-small-business/ Highly disorganized countries are the land of opportunity and good food. Highly organized countries are the land of political correctness, and I suggest you to carry along your own Olive Oil bottle in case you must stay longer. Reality? Or Perception? Either way, this is a damage to Italy and its cultural background: Some years ago a small rural town in Italy twinned with a similar town in Greece. The Mayor of the Greek town visited the Italian town. When he saw the palatial mansion belonging to the Italian mayor he wondered how he could afford such a house. The Italian said; "You see that bridge over there? The EU gave us a grant to build a two lane bridge, but by building a single lane bridge with traffic lights at either end this house could be built." The following year the Italian visited the Greek town. He was simply amazed at the Greek Mayor’s house, gold taps, marble floors, it was marvelous. When he asked how this could be afforded the Greek said; "You see that bridge over there?" The Italian replied; "No" This Joke is a courtesy of Mark G. Brennan