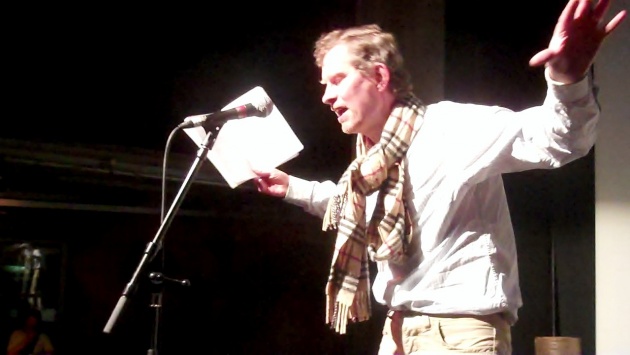 Not everyone can be a poet. It takes a special skill, the ability to write in the appropriate pentameter. You need to muster vivid imagery in the mind of the reader, to use words to connect ideas, and, very occasionally (if you must) to rhyme. Oh, and don’t forget to count the syllables.

So what did I think I was doing?

On 24 July 2013, I found myself on stage at the Rich Mix arts venue in Shoreditch, performing a (so-called) poem entitled ‘It’s Not So Easy Being Clean’. I decided to go free verse – well, I wasn’t charging for it – and joined 23 other ‘open-mic’ takers who took turns to perform. Some of them did indeed ‘perform’. One artist removed his shirt and barked through a megaphone. Another stamped his feet. Some knew their work by heart. Others read from notebooks or typed texts.

So what was a film reviewer doing at a poetry reading?

Jawdance, run by a collective called ‘apples and snakes’, takes place the final Wednesday of each month at the aforementioned Rich Mix, an arts venue in the vicinity of Liverpool Street Station and Hoxton in East London. The venue has a café, three cinema screens, and a performing space with a bar. It also hosts art exhibitions and workshops for the kiddies. The BBC Radio Four show, ‘Any Questions’ was broadcast from there recently. So it has something for everyone, except perhaps agoraphobics.

Jawdance also screens poetry films. Not exactly Maya Deren’s MESHES IN THE AFTERNOON, but films or rather DVDs of people speaking poetry. In one example, a woman’s face (belonging to poet Ioney Smallhorne) was shown in profile as the words she was speaking flashed on to the screen as if from a speech bubble, occasionally ahead of her voice. In two others, produced in collaboration with the Norwich Writers Group, the poet was situated in a warehouse space with a Roy Lichtenstein-style painting in the background speaking their words to camera.

I arrived at the venue shortly before 7:00pm and was placed 21st on the list (I was actually 23rd). I was, as they say, in reserve. The list opens at 6:15pm. Get there early or don’t bother is my advice. Actually, if I had carried out my original plan or going to the press preview of AIN’T THEM BODIES SAINTS then heading off to the Rich Mix, I would not have performed. Circumstances, that is, having to collect a USB stick left accidentally at the library on Monday, prevented me from getting to the preview screening on time. (Sorry, Premier PR.)

So, who were the poets?

The first was Anna Forsyth, whose poem, according to my notes, included the phrase ‘tongue slips’ and ‘teeth clenched together’. (I need to take better notes.) I can’t exactly recall what it was about (sorry, Anna). The second performer was Jason Pillay. He performed a five minute excerpt from a twenty minute piece about himself. He was the aforementioned foot-stamper, a Mick Jagger-esque figure who proclaimed ‘I write a dictionary you need to read’ and ‘I start riots/I am the arbiter of taste’, before deciding to repeat the phrase ‘magic in a hotel room’ over and over again. ‘Magic in a hotel room/Magic in a hotel room... only I know what I mean when I say/Magic in a hotel room’.

Anna Roxon (Rockson) performed a piece called ‘My Application’. It was about her ethnic origin, or rather the circumstances of her being, and how this could not be summarised by a place name. ‘I am a fighter and a defender.../I choose uprise/I come from your limitations.’ Me, I’ll just write ‘South London’.

Next up was the first featured act, Bam Bam the Poet. By now I was getting the idea that poets were like wrestlers, with exaggerated monikers. Given that there are such things as ‘poetry slams’ I could imagine one word-smith taking on another. Like professional wrestlers, they would try to best each other with turn of phrase, elaborate rhymes and (let’s face it) stage-managed pre-rehearsed moves with mutually agreed outcomes. (Admittedly, that didn’t happen in 8 MILE, but that was the world according to Eninem). Bam Bam was love-stuck. He talks to girls. He was desperate for ‘the half chicken on their Nando card’. He explained that he lacked the funds to buy a young woman dinner but would exchange ‘the half chicken on their Nando card’ for his company.

I’m sure for Bam Bam this technique had a good success rate (why not, he seemed a charming chap) until he explained he was a poet and they said, ‘why can’t you be a rapper like everyone else?’ and left him there counting the bones of his half chicken.

Bam Bam was followed by Ioney Smallhorne’s film then several more ‘open mic’ acts. The first of these (Anna-Maria, did not catch surname, wore a striking red dress) spoke about ‘blue eyes’, ‘the blue eyes that bind us together’ before referring to ‘blue eyes’ as ‘you selfish bastard’.

Well, I hope that was cathartic.

Claire Sands (open mic act number six; my notes say she spoke of a star she wished to board) was followed by a bloke called Brando – yes, I, Larry Oliver, shared a stage with Brando. Fortunately, Brando did not mumble. He spoke of ‘an unanswered question he needed to ask’, ‘adjusting rifles’ and a ‘small boy’. He actually did two poems – my notes don’t differentiate them. Like the real Brando in APOCALYPSE NOW, I had no idea what he was saying, though it seemed to make sense at the time.

Joshua Pigalle was act number eight. Like some of the others, he pushed his three minutes (the allocated time for each act) to its limit. He described (not in verse, of course) how he was a primary school teacher, how he received his best heckle from a little boy, ‘if you were an animal, what sort of astronaut would you be?’ His poem was called ‘Chicken’ (another theme is emerging; thank you, Bam Bam). It was based on a real-life incident, a moment between the poet (as a young boy) and his brother. Joshua hid under a cover and saw his brother face a mirror and start clucking like a chicken. Joshua laughed and revealed himself. He asked his brother why he did that. His brother replied, ‘I wanted to know what it felt like!’

I sense a metaphor in there somewhere.

Some of the other acts were unmemorable (that’s another way of saying I cannot read my notes).  I did like the lady who in her poem ‘Paradise’, described a body as ‘an investment’ and asked ‘who needs an education when you have a Double D?’

Then there was Sean Rivers.

He was the original stripper and megaphone man who complained about something innocuous giving you STAs (curse my notes; I know he was funny).

He was followed by an old guy, Rivond, in a flat hat. He was a complainer. He complained, ‘why is the seat next to me [on the bus] always empty?’ Someone sits next to him and then they move. ‘I feel like following them.’ The poet sat next to a man who said on the phone that he had killed someone. He didn’t move. It seemed impolite. ‘I didn’t want to upset him.’

The second featured act was Yvonne Eva. Her first poem featured the initials ‘SQ – Spiritual Intelligence’. Surely she means Spiritual Quotient, but it does not pay to get literal with a poet. Her second poem was called ‘Poison’ and described a break up, how she turned poisonous words into medicine, which is another way of owning bad things said about you, rather than addressing the problem. Food for fraught!

There was indeed another featured act and a performance by our host, a Slam Poetry Champion who ‘earned the right to speak for everyone in the room’ in her youth and recited an affirmative ‘we’re all worth something’ poem, name-checking Peckham and Hackney. I liked her phrases, ‘Poundshop Pride’ and ‘Kentucky Fried Complexion’. Yes, with descriptions like that you can speak for everyone in the room.

For sheer eccentricity, no one could match Lucy Carrington, an elderly lady who tottered in heels and held a silver handbag. You can look her up on google. In 2008, she published a volume ‘Songs and Poems for Lady Diana Spencer.’ She made me look young, which is saying something. Her poem wasn’t a poem, it was a song. I had no idea what she was on about but she had books available for sale afterwards.

For Antipodean frankness, you could not fault Hannah Hotspur, who described the ways in which women hold up their heads in gay bars and how her mother in a nursing home ‘educated the doctors about the munchies’. Her message was simple: ‘stop asking for permission/to be’. Hannah was allowed to perform a second poem – well, the MC knew her. It was inspired by Vogon Poetry Slams, which if you don’t know what that means suggests that you probably have a life and described tetris as a metaphor for a relationship, with its telaminas; how if you hit the pause button and start the game again, you leave gaps. Then there is the small matter of leaving your ‘Top Gear’ magazines all over the place.

By the time I got to the 20th poet my notes were totally beyond comprehension. The anticipation of performance takes over. Poet 21 - not me. Poet 22 – also not me! Then, ‘please welcome to the stage, Larry Oliver.’

I had the clever idea of recording myself using a Flip Camera, only it wouldn’t work. You know old people and technology – that’s hardly a surprise! Some kind soul decided to film me and got it to work (thank you, sir) and I did my piece which is as follows:

‘Kid with a star map on his face/Hates the touch of dripping cloth/It’s not so easy being clean.

‘Comics whose tired puns abuse/The ears of pinted punters, seated quiet/It’s not so easy being clean.

‘Pinpricked and with hollow eyes/Shivers and shadows make the point/It’s not so easy being clean.

‘Services cut by cashless councils/Detroited detritus left to grow/It’s not so easy being clean.

‘Ozone popped by China’s chugs/Heats us up and makes us sweat/It’s not so easy being clean.

‘But face the issue, take the pain/Try the treatment, spend the cash/Don’t drop the bombs ‘S’, ‘N’, ‘C’ or ‘F’/Even though they sound like the French railway.’

Needs some work, I think, but within the three minute time allowance.

JAWDANCE next meets at the Rich Mix on 25 September, then the last Wednesdays of October and November. Performances start at 7:30pm.