Let me start this blog by saying that it has been a GREAT year. In fact, let me rephrase that; it has been an AWESOME YEAR – both in and out of the site. I wouldn't go much into detail about the ones that happened offline since many of my awesome followers already know that I'm ANO - Awesomeness Number One (needless to say, awesome things happen to awesome people).

Instead, treat this post as more like of a look back of 2016. I know (and based on observations of recently approved blogs) that a couple of members have already submitted Christmas posts. Anyone who has been active for the last few days have probably noticed Christmas-related topics on the homepage or on the page of the people they follow.

So, for a change, it would be quite nice to reflect on the important things that happened on our bitLanders journey for the past year. It would be nice to do this now since 2016 is about to end within a few days (as of posting time).

Basically, this post will focus on the following aspects:

While reading this post, yours truly suggests to reflect and relate the content to your own bitLanders 2016 experience and feel free to share it with the rest of the community via the comment section.

As mentioned, I had an awesome bitLanders journey this 2016. However, it is worth noting that the site itself has undergone significant changes that led to different success stories.

1. Launching of the Global Survey Chat

First of which is the bitLanders Survey Chat. Veteran members probably already know what this particular feature is, but for members who just went on board - the Survey Chat was launched sometime in the late stages of the first quarter or early Q2 of the year. Yes folks, that interactive thingy in the right side of the screen once you log in at your PCs or lappys was a new feature of the site this year.

Members who are not fully utilizing this feature are advised to do so. Apart from the large amount of bitMiles given away by simply answering questions – one will surely learn interesting information from the inquiries asked by the site bots.

You may read more information about the Survey Chat on the above link.

2. A Stand Against Spam and Security

Spam (not the food) is a problem encountered by millions of sites around the world. bitLanders is not alone when combatting this online menace. The site has had enough of the ridiculous amount of spam delivered by spammers which is why the team made some drastic changes and penalized erring members with severe consequences.

Many seasoned members are with the team on this initiative as many shared their views and opinions through posts. Said posts are beneficial especially to newbies so that they would be aware of the many site do’s and don’ts. Here is a good read regarding Spam: Important Reminder: Report Cheaters and Spammers

Besides addressing spam, the team is also serious about its members’ identity. Identity theft or using another person’s identity without permission is another prevalent problem of the digital world. To ensure that this problem will not threaten the site’s integrity and operation, members who requested to withdraw their funds for the first time must send his (or her) photo – together with a valid, government issued ID and the word bitLanders written on a piece of paper.

With this approach, the team can check out the authenticity of the member’s identity. If I may, that is a clever method devised by the bitlanders’ team. Great job guys!

The phrase is quite straightforward. Because of the initiatives launched by bitLanders this 2016, there is apparently more incoming revenue. This can be seen with the appearance of new ads, more giving away of bitMiles and fast arrival of the rewards.

Unlike other sites where members are left in the dark if their money will arrive, I can attest that of the numerous rewards-request that I have made, I never missed a single one.

Below is a post I have written to discuss how one could better understand the financial aspect of the site. Basically, it should provide deeper insights about the site’s rewards system:

Post available at A Better Understanding About Earnings on bitLanders

On this topic, I would also like to discuss, or rather give thanks to the team for their reliable communication and site interaction. Given its numerous members, the bitLanders staff always impresses me with their quick turnaround response time on any of my queries. It is also common to see a member of the team on the global chat and interacting on the comments section on certain posts. 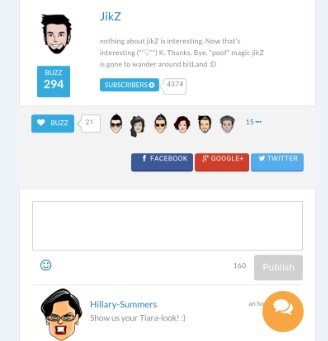 (Photo Source: Personal - a screenshot of Hillary's comment on one of my post. This photo shows that the staff are also interacting and commenting on certain posts)

For privacy reasons, I couldn't show a screenshot of my email inquiries to the team. However, rest assured, they always respond within an acceptable timeframe.

If you’re still reading, then congratulations – you have just arrived on the second part of this blog. In this section, you’ll find juicy and important information that you may adapt to improve your very own bitLanders experience.

Moving on, let me just say that I extremely proud of my bitLanders 2016 accomplishments. Obviously, one should be proud of any positive accomplishments that they have attained.

1. The First is Number One

The first one that I wanted to highlight is a feat that only a single member can achieve at any given time. Of course, what I'm talking about is capturing the number one spot in the leaderboard.

Some readers may not believe it since my current rank is all the way down anywhere between 10 to 30 – but there was a time when I was rank one in the leaderboard. Naturally, these same readers would ask for proof – to all such readers, feast your eyes on the picture below. The photo is proof that yours truly has reached the pinnacle, the most sought after leaderboard position in all of bitLandia. 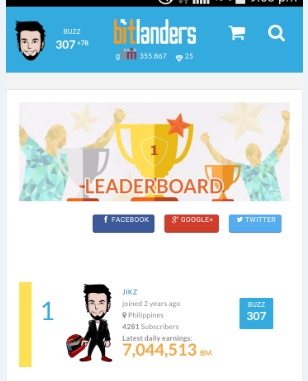 I couldn't recall for how long (days, weeks, months, etc...) – it doesn't really matter. Back then, my focus is to reach the top spot to prove to the community that it is possible for any member to grab that coveted spot.

The second item is quite ironic that it is borderline cliché. For many months, I held the number two spot in the leaderboard. Sure I can easily capture the next level higher, but I’m a nice guy (and a gentleman too) so I usually pave way for the ladies. Besides, the lazy and busy tandem also gets in the way, so yeah, there’s that. 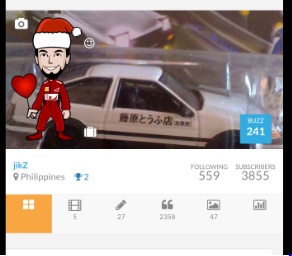 As mentioned, Rank 2 is not that bad. In terms of earnings, it is also great. Logically speaking, monthly earnings is a good determinant of one's rank. To put it more simply, if a member's monthly earning is high, it only follows that he or she has a high rank since the two are directly proportional with each other.

The next milestone that I would be sharing is me reaching the unbelievable (but doable) 300+ buzz score. As far as I can tell, only a selected few was able to get pass that 300 buzz score mark that even previous top members were not able to do it.

But don't worry dear readers, I'm pretty sure you can do it also. Just remember, have fun bitLanding, submit meaningful content, interact, and you'll do just fine – oh and of course, be on the look out for those magical special items. Like I said, if I am awesome, those items are magical.

Ok, enough with my rank, buzz scores, and other of those stuffs. This next highlight is about a remarkable lady from Netherland. I tell you, it's quite rare to have a certain type of connection with someone that you haven't met in person. But thanks to bitLanders and the magical effect of the site, a special kind of bond was triggered between me and Ivymaria.

Thankful to the different forms of information sharing and communication channels of bitLanders, me and Ivy learned a lot from one another. We discovered and learned cultures, background, and other interesting aspects from one another.

But sadly, Ivy is no longer that active in the site. We all have something we have to do and prioritize. So whatever is keeping Ivy busy, I hope her all the best and I want her to know that I appreciate all those time and interactions between us.

Anyway, readers who are not familiar with Ivy and her works. She is a kindhearted soul with a knack for the arts and movie making. Below are two videos that she made exclusively for the site.

(Video Credits: Both videos are from Ivymaria)

5. A different kind of learning

This next one is somewhat correlated above. In the site, we learn a lot of things from different members. Now I say that this is special since it is a different kind of learning.

It is not the kind of learning one gets when reading a book or searching the web. There is something special and a unique form of validity when one learns a thing or two from people who has direct experience. 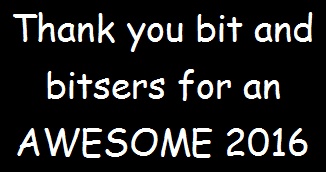 Well that's basically it. All in all, like I said in the early portions of this post, it has been an awesome bitLanders.

Big kudos and shout outs to the people who operates and maintains the site. Keep up the great work and thank you bitLanders for being awesome this 2016.