Annyeonghaseyo! (Hello!) Korean culture has been very widespread and massive since Korean Pop or "K-Pop" and Korean drama or "K-drama" was introduced to the world. We adore their food, fashion, and smooth perfect skin.

In the Philippines alone, a lot of people are loving the Korean culture especially those on the teenage and young adults age group. K-Pop and K-drama are very popular in the country, with K-Pop groups performing to sold out shows. However, it is not just a one-sided love for culture. Koreans also come to the Philippines to learn English, while some, to start a business. With the love of Filipinos to Korean culture and Koreans coming to the country, Korean-related business became popular, some with having the majority of the whole street filled with Korean establishments just like one street in the city of Angeles, known as the Korea Town! 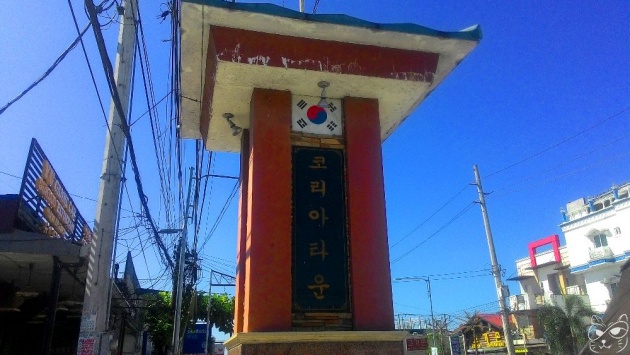 Korean-related restaurants and other establishments are already everywhere, but if you want to visit and have an authentic experience, the best option is to go to the Korea Town. There are a couple of Korea Towns all over Philippines, one of which is located in the city of Angeles, in the province of Pampanga.

The Korea Town in Angeles City is located at Friendship Highway in Barangay Anunas. A wide stretch of the street is filled with lots of Korean establishments wherein most are restaurants and wellness centers. Anyone going here will definitely have a wonderful feast of the currently very popular Korean dish in the country, samgyeopsal! Apart from that, there are also bakeries, money changers, travel agencies, convenience stores, drugstores, bingsu shops, etc. Most of the stores here are closed in the morning, by the way. They open around lunch and will run until evening or dawn.

Walking to this street makes you feel like having a mini experience of being in Korea except that the staffs you see at the establishments and people walking on the streets are mostly Filipinos. On the other side, having a Korea Town will make Koreans living in the country feel less homesick because there is a street-wide of Korean stores for them to feel close to the comforts of their homeland.

WHY ARE KOREANS IN ANGELES CITY?

Angeles City is a city known for having lots of foreigners, especially American men, because of the U.S. Air Force Base (Clark Air Base) in the area decades ago. The base was shut down after the destructive eruption of Mt. Pinatubo in 1991. Many Americans still lived in the city after. They probably loved the place or got married to a Filipina, had children, and decided to live there for good.

I am not sure when did the Korean community began in the city, but it is most likely after the volcano eruption. According to an article published by SunStar, Koreans have been putting up investments on other countries due to the conflict between the North and South Korea. Among the countries Koreans have also chosen to live in the Philippines, particularly in Baguio City, Angeles City, Cebu, and Metro Manila. Philippines is a few hours away from Korea and one reason why they chose Angeles City is that the city has an international airport, the Clark International Airport. Settling in Angeles City makes it very convenient for them to go back and forth to their country. (Read more HERE.)

Koreans love the Philippines because education is cheap and they can learn good quality English too. In addition, the Korean culture craze today just makes it very easy for Koreans to thrive in our country as well by putting up businesses. I honestly didn't know that there is a Korea Town and Korean community in Angeles City. All I know before that it was the Americans who were the common foreigners and tourists on the area. I didn't know Korean community had already began dominating them. 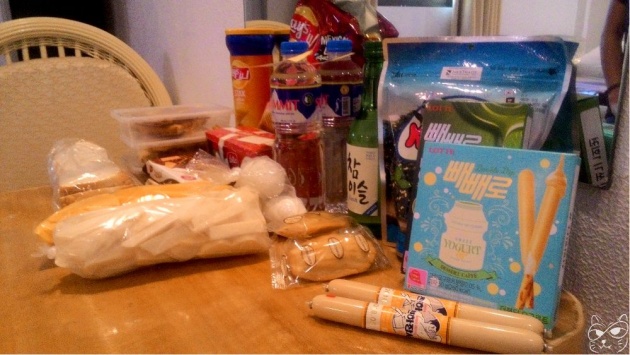 We arrived at Korea Town around 10 A.M. that's why most restaurants were still closed. It was our first destination upon arriving in Pampanga. We didn't know that the restaurants open at lunch or afternoon, so we just bought some Korean snacks at the convenience store named Kim's Sing Sing Mart before heading to Clarkton Hotel. The store is just a few walks away from the Korea Town signage so it is very easy to find.

Going to the Korea Town was all mhaiiiself's idea. My K-Pop and Korean culture enthusiast friend. (Lol.) She picked most of the Korean snacks we are going to try. Prices are cheaper than those being sold on Filipino stores. Most of them are already common but here's the list of snacks we bought from Korea Town. 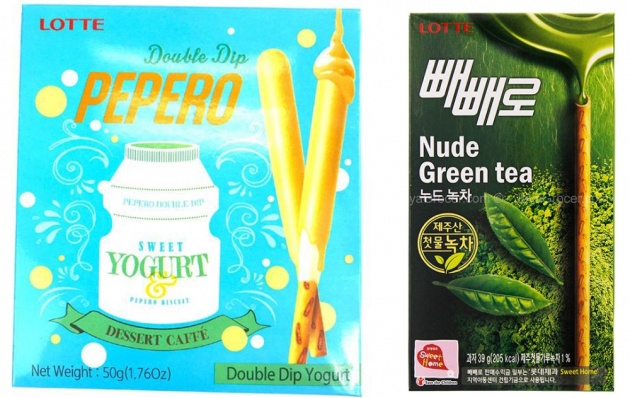 Pepero has been available on different supermarkets and convenience stores in the Philippines. I know most Filipinos are already familiar of this brand since it is widely sold. Pepero is manufactured by Lotte Confectionery. It is the Korean counterpart of Pocky, a Japanese biscuit stick by Glico.

The biscuit stick is coated in different flavors such as chocolate, strawberry, cookies & cream, and many more. My favorite flavors are chocolate almond and matcha. For our Korea Town trip, we bought the Sweet Yogurt flavor and Nude Green Tea or matcha flavor. It's my first time to try the Sweet Yogurt variant. It tastes good but still, nothing beats the matcha flavor! 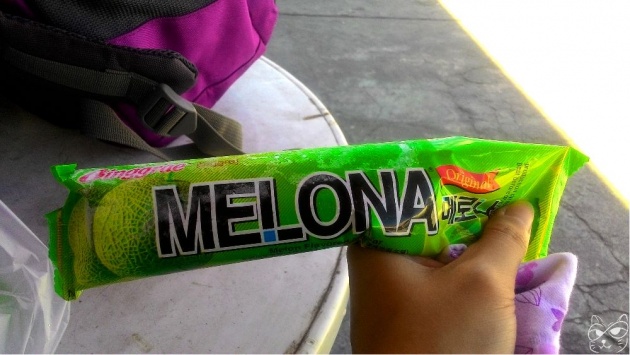 Melona is an ice pop manufactured by Binggrae. This ice pop is already sold on some groceries in the country but I never thought of buying it since my mother tells me not to. She doesn't trust foreign products very much especially those with little English description. I believe Melona is a good brand so I bought it when I got the chance at Korea Town. We got the melon flavor and it tastes good but nothing really special in it, for me. I like Nestle's Twin Pops more than Melona. (Sorry...) By the way, Melona ice pop is cheap and only costs less than Php 30 ($0.57 USD), if I remember it right. 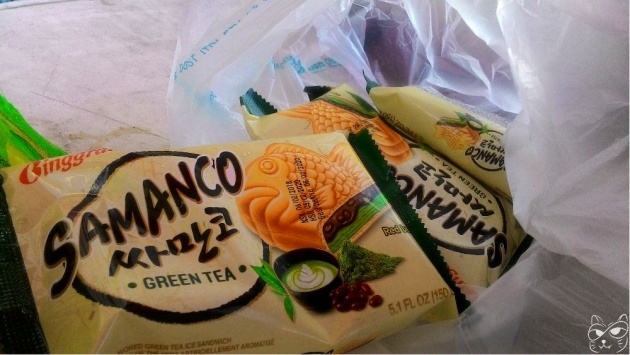 Samanco is an ice cream sandwich, also manufactured by Binggrae. The shape of the sandwich is a fish, similar to the Japanese taiyaki which has a red bean paste filling. However, Samanco uses 2 types of filling on its sandwiches: ice cream and a filling depending on the variant. It can be a jam or a red bean paste as well.

I've been seeing the Samanco ice cream in social media, so my eyes definitely sparkled upon seeing it on the store's freezer. I bought the green tea (matcha) flavor, of course! What else do you expect? I was never wrong with my choice and it was love at first bite! I remember how I told my friends repeatedly how delicious it is while I ate it. This is one of my favorite ice creams and I will always love Samanco!

I have also eaten the strawberry flavor when a grocery nearby started selling these ice creams. It tastes delicious as usual but I'd still go for the matcha flavor. 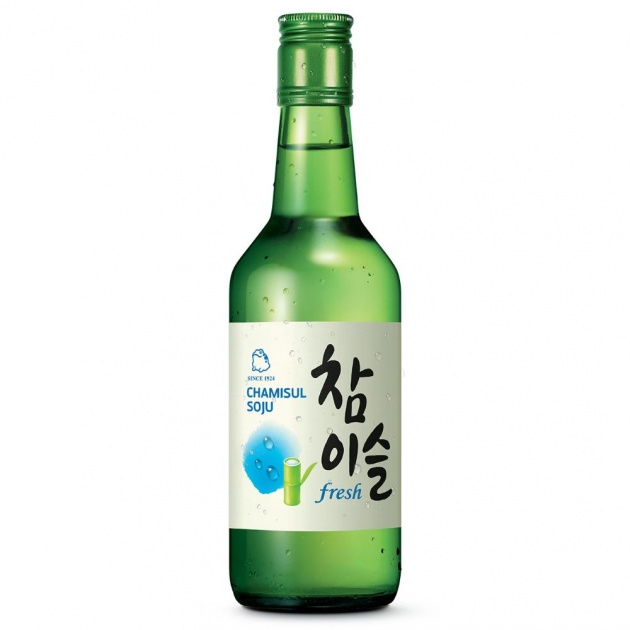 I've been seeing Soju drinks at groceries and many young adults were posting it on social media. It's popular in the country probably because it tastes really great or just people wanting to join the bandwagon. I initially thought that this drink was a fruit-flavored water because of its cute packaging, plus the images of fruits on the label. I never thought it was an alcoholic drink.

Mhaiiiself chose the flavor Chamisul Fresh which we have no idea what it is. But according from my research over the internet while writing this blog, I found out that Chamisul Fresh is known for its clean taste because it has 100% natural ingredients and filtered through a bamboo charcoal. It is also the best-selling Soju variant.

My first sip of the Chamisul Fresh tasted surprisingly good, I didn't taste any alcohol at all. I felt that I could drink lots of it, even my friends were surprised I didn't flinch. However, the sweet and fruity taste was gone on the succeeding shots. It suddenly tasted bitter and I could clearly smell the alcohol in it. 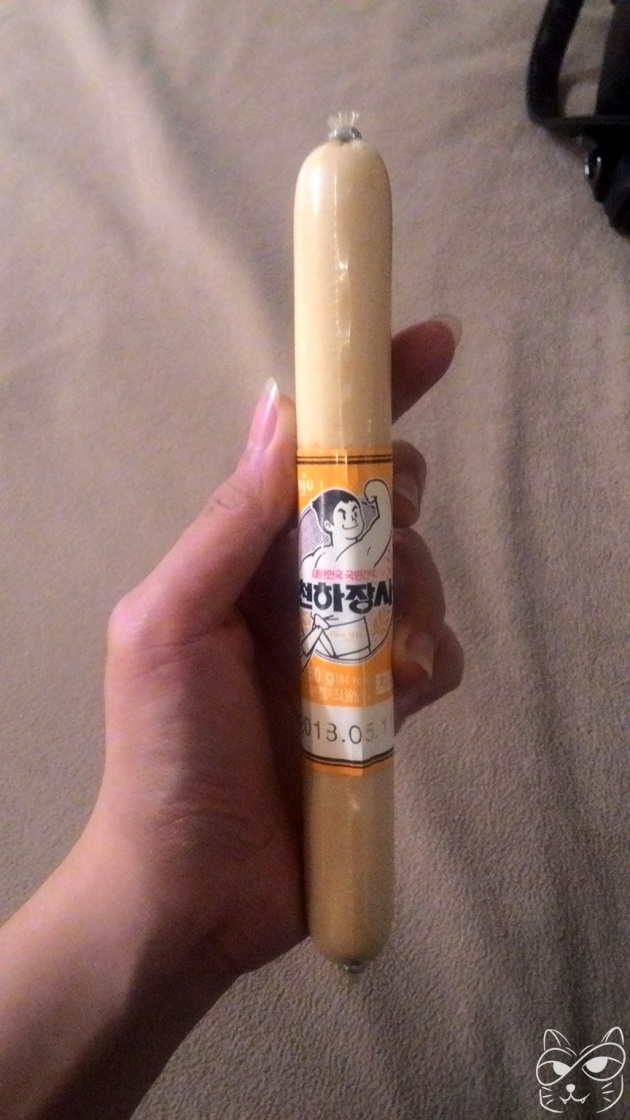 The sausage snack is a common Korean snack. It comes in different flavors but I think the most popular flavor is fish and cheese. The sausage snack became popular in the Philippines because of the Korean drama, Weightlifting Fairy Kim Bok Joo.

My friend was look for the exact brand Kim Bok Joo was eating but can't find it, so she chose the sausage snack by Jinju. I really can't distinguish what flavor was the sausage she got us but it doesn't taste bad too. I am fine eating more of it. It's probably fish and cheese? Original flavor, maybe? Anyway, the texture is lighter than the usual sausage sold in can and it almost feels like a jelly when chewing it. 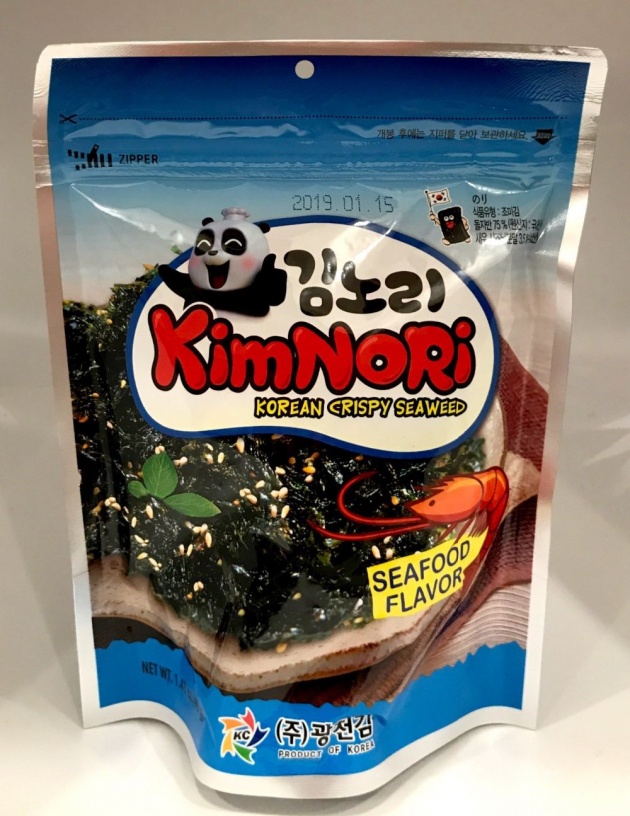 We also bought a seaweed snack by KimNori. It's not the usual seaweed sheets used to wrap sushi or onigiri. The seaweed we bought were grounded into flakes. It's also seasoned and has a flavor. The flavor we chose is seafood.

You can eat the seaweed alone just like chips or popcorn, or you can use it as a topping on foods. Mhaiiiself told us that it tastes good as a topping for rice. (Sounds like sushi! Yay!) We ate it with egg and as it is when we were at the hotel. I think I'm buying a pack of it this New Year because I kind of miss eating this. Though I'm not sure if this brand is available at the stores in my area, so I guess any brand will do.

HOW TO GET HERE 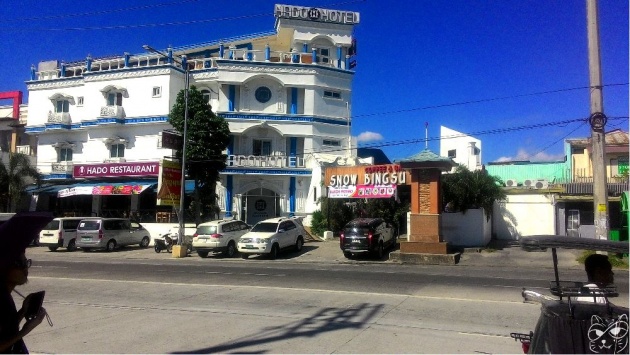 Korea Town is near the city proper of Angeles and so going here is easy. It is located at Barangay Anunas, Friendship Highway. From the Clark Main Gate, ride the jeepney with the "Main Gate - Friendship" route and don't forget to remind the jeepney driver to drop you at Korean Town. Time travel is around 15 minutes, but don't worry because the Korea Town is the last destination of the jeepney before returning to the Main Gate. You'll never get lost.

The driver will drop you in front of Jollibee which is beside the Korea Town. It also passes by Clarkton Hotel. If you are returning to the Main Gate, just look for the same jeepney beside Jollibee. Jeepney fare is just Php 8 ($0.15 USD).

EXPERIENCE KOREA IN THE PHILIPPINES! 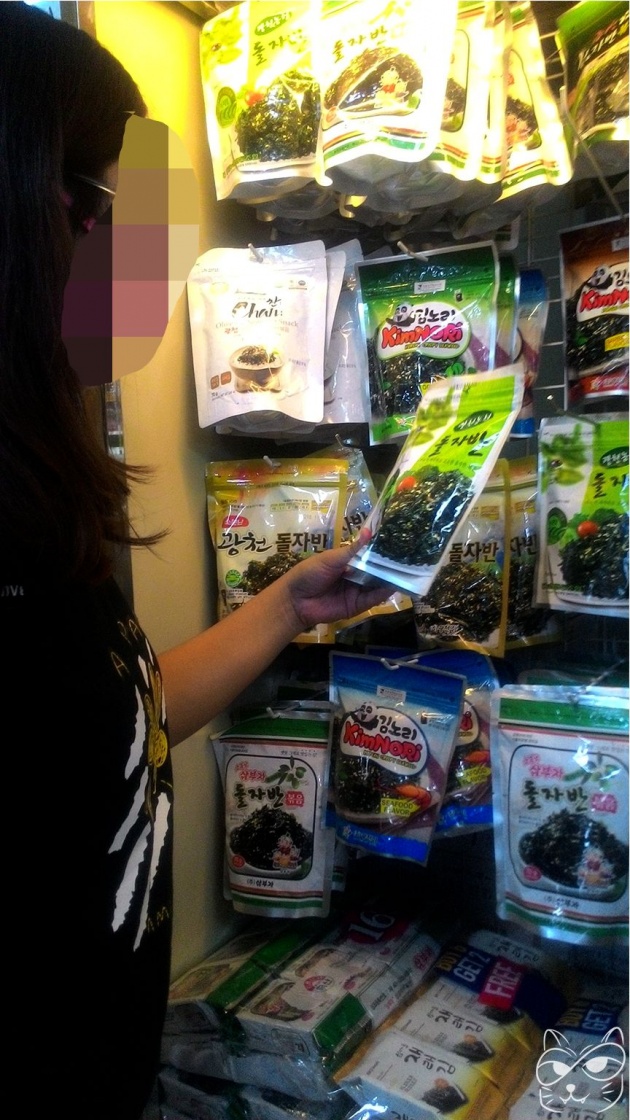 Going to this place for the first time will surely make you feel like you're being transported to Korea. We haven't experienced dining at the restaurants because they were still closed when we arrived and it's quite sad. We could've feasted on samgyeopsal and other Korean dishes but at least we got to explore the place a bit and bought Korean snacks.

It was still a good visit and I am also looking forward of returning to this place someday to fill my stomach with Korean dishes and see how this place is like at night with my bare eyes. If you are going to Angeles City, you may want to drop by this place for a sumptuous Korean dish! Who knew that experiencing a part of Korea is just one jeepney away from the Clark Main Gate!