Korean Reality Show Review: Hello Counselor - Can you taste it? 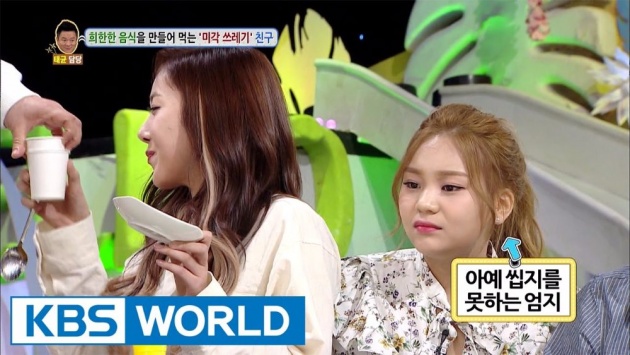 Korean Reality Show Review: Hello Counselor - Can you taste it?

Hello guys~ LookUp again here :3 In my previous blog, I have discussed the first concerns of "Hello Counselor" about "The Unbelievable Man", and now I am going to discuss about the second concern, "Can you taste it?". If you want to know more about "Hello Counselor" you could read my old blog about it titled "Hello Counselor: The Problem Solver TV Show". Once again, do not be bored with my blog because I still have so many things to review :D I hope you could enjoy it. Happy reading~!!!

The second concern comes from a 21-year-old female university student, Jeon Min-hong. She came to "Hello Counselor" because she had a problem with her friend who always shocked her. They've been friends for 10 years, and her friend always makes unusual dishes, like peach fried rice, rice with vitamin pills, etc, and she's always asked to taste it. Another problem is, her friend often eat food that has expired, which often makes her sick. She came to "Hello Counselor" with hopes of stopping her friend's habit. 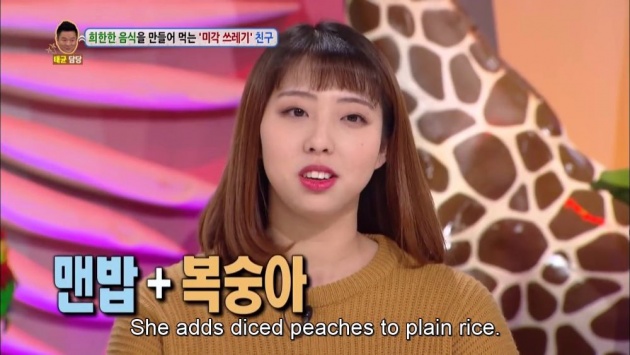 She said that her friend likes to come up with new dishes. A rice with vitamin pills is just rice mixed with vitamin pills and added with half-cooked egg on it. She add mustard to instant jjajangmyeon, until it turn out yellow, and her friend said that it was delicious. Her friend doesn't use many ingredients for her dishes, like she just add diced peach with plain rice. She said that they have been friend since middle school, and since they didn't have much money, they often makes snacks on her friend place.

Jajangmyeon (자장면) or jjajangmyeon (짜장면) is a Korean Chinese noodle dish topped with a thick sauce made of chunjang, diced pork and vegetables.

Well, another unique concern. I never heard of rice vitamin pills :D and of course I would refuse if anyone offered me that. I feel sorry for her friends, because they have to taste every dish from their friend which sometimes they do not even know what is added in the dish. I will put some pictures of the dishes below and tell me if you want to taste it :D 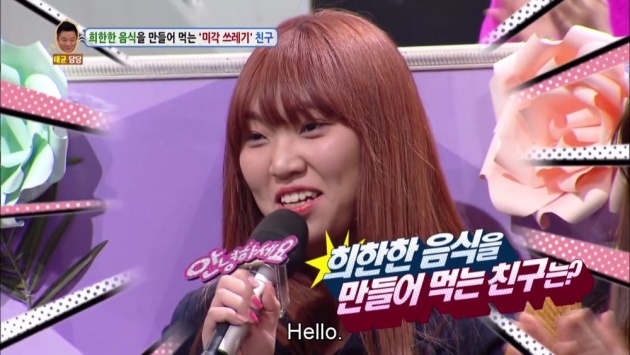 We meet with her unique friend, Umji. She said that she started making dishes since she was at seventh grade. Both of her parents were busy with work so she often cooks for herself and her younger brother. She says that her dish is delicious and even her brother likes it too, so she wants her friends to taste it too. When she was asked what the best dish she had ever made, she said that jjajangmyun with mustard was the most delicious. 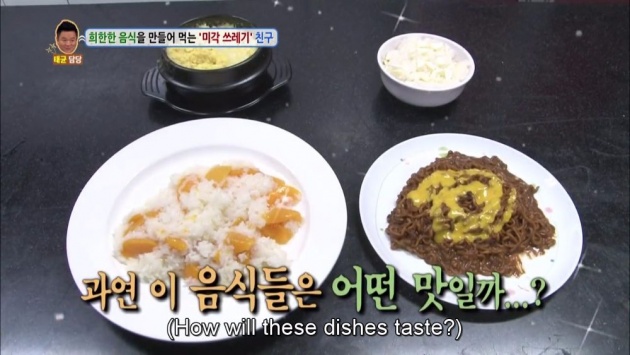 To give the hosts and the special guests real experience about the dishes taste, "Hello Counselor" has prepared the dishes which she has made while in the waiting room. Some dishes that have been prepared are, peach fried rice, rice with vitamin pills, instant jjajangmyeon with mustard, and steamed eggs with starch syrup. 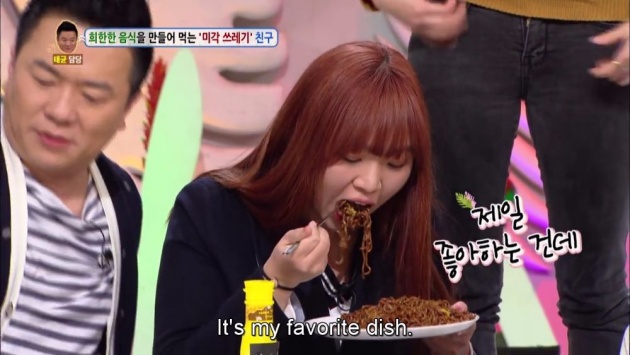 Well, in my opinion if only judging from the appearance alone, only steamed eggs with starch syrup which I think is edible out of the four dishes. I think I will give it a taste if she offered me :D As for the other three, I doubt if I can eat them. Just by looking and smelling at them, maybe I will refuse to taste them :D

"Cake with vinegar and chocolate drink with sauce fish" 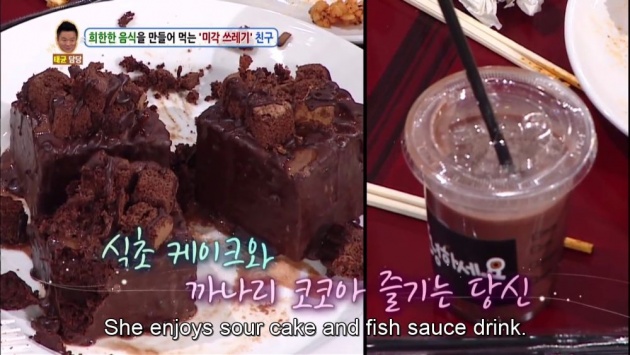 Another problem is, her friend has dull taste bud and dull sense of smell. It is based on tests conducted by "Hello Counselor" by asking her to taste three different foods, which is salty rice ball, chocolate drink with fish sauce, and chocolate cake with vinegar. When she eats it, she does not show any problems, she just says a little salty, cold, etc, and she seems to enjoy it. While the hosts and special guests say the exact opposite when taste it. This problem always makes her eat spoiled food and end up making her sick. She can not tell which food is edible or it has went bad, unless her friend tells her. 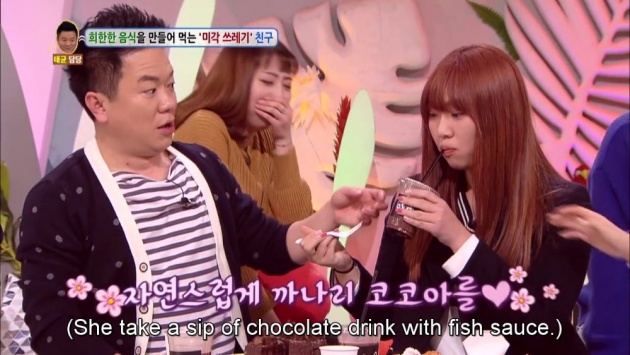 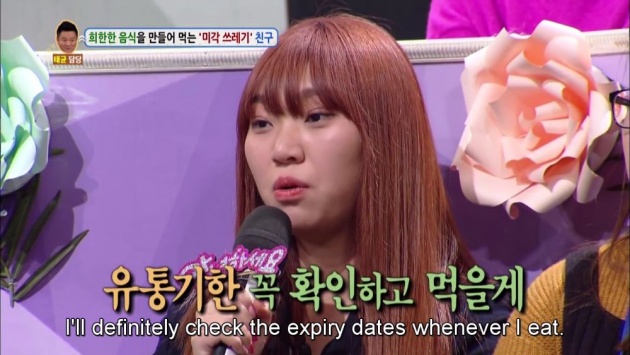 Overall, I would vote this matters as a serious concern. I cannot blame her for her dull taste bud. I just want her to be careful from now on, since now she realized that there are something wrong with her, because this could lead to serious health problem if she keep eating unhealthy food. With this, she earned 115 votes out of 200 audiences. 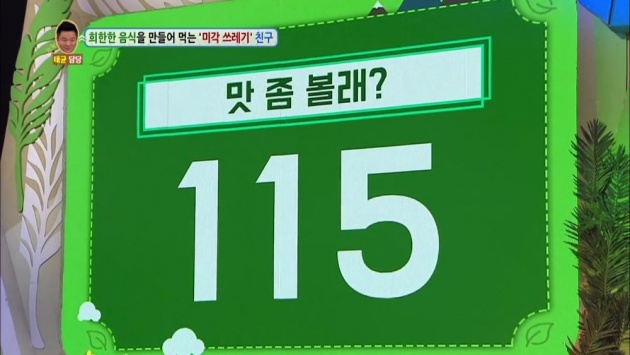 That's it my simple review about the second concern of "Hello Counselor" this episode, "Can you taste it?". I will discuss the third concern on my next blog which is about "Let Go of Your Dream". I hope you enjoy this boring blog and see you next time~ :D