Make the most out of it as if it's your last day. 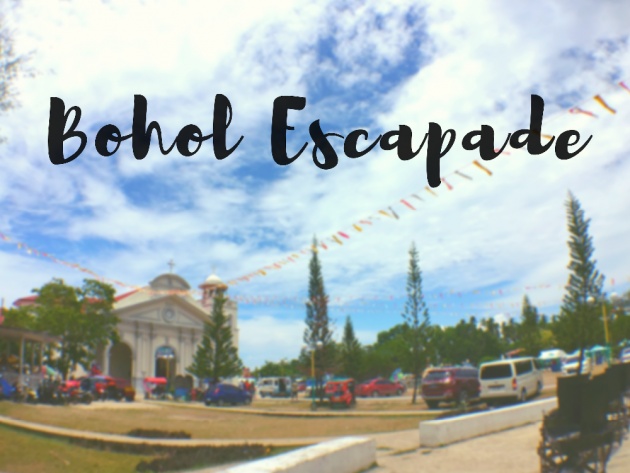 Yes, it was definitely our last day in Bohol, meaning it's our last day to unwind before we head back to work. We still had few spots to visit and had less than 8 hours to spare before going to the port. Honestly, our 3-day vacation is not enough to see all of the beauty of Bohol. Now here are the places we went before welcoming work.

Hinagdanan Cave is located in Dauis, Bohol. It is categorized as a karst cave which means it is formed from the dissolution of soluble rocks like limestones. It boasts several stalagmites and stalactites formations and a freshwater pool that is about 10-12 meters deep.

Hinagdanan Cave is translated as "Laddered Cave". It was accidentally discovered by a farmer when he found two holes while clearing his land. Like a curious cat, he dropped a stone and heard a splash. He built a ladder (hagdan in Cebuano) to see for himself the hidden beauty, thus, the cave named as Hinagdanan.

Unlike any other cave wherein you have to crawl and to bring along flashlights, Hinagdanan Cave has been modernized making it as the most accessible underground cave in Bohol. The cave's entrance which is less than a hundred meters long can only be entered one at a time. The walkway is a cemented staircase and it's really slimy caused by the cave's natural water droplets.

In the cavern, there are several lights just to give light the once dark cave plus the two big holes as the natural light of the cavern. On the center is a natural pool and on the ceiling, parallel to the pool is the stalactites. Because of the stalactites, the water is refreshingly cold. The water is in a hunter green color because of the green limestone at the bottom accompanied by the minimal source of light inside.

Not a swimmer? Worry not for there is available life vest inside. Hinagdanan Cave was first in our itinerary for the day. We arrive before 8:00 am and it was not crowded. We decided to come as early as possible since we want to avoid the crowd and after almost 2 hours of swimming, the crowd started to grow and we decided to resurface and gave to the other tourist our life vest.

Outside the cave entrance are stores where you can buy souvenirs and foods. There's also a comfort room and shower room. The two are in one room, three cubicles for the comfort room and a shower. We were four and to save time, we decided to rinse together. There is an available big tub and a spoon-shaped vessel with a long handle, Kabo in Cebuano, thus you can still rinse together and save time.

The only thing that I dislike the most was the expenses. The entrance fee is Php 50 and if you want a swim, you have to pay another Php 75. I get it why they separate the fees because there are tourists who prefer not to swim. I think an additional of Php 25 - Php 40 could have been a better idea and less expensive. The total fees for the cave alone caught us off guard and made us decide longer than we had expected.

For nature lovers and marine biologists, Nova Shell Museum is a must stop-over. It is run and owned by Mr. Quirino Hora who has been studying and collecting different kinds of mollusks.

The Nova Shell Museum is really big that it houses hundreds of shell of different species. More than half of the shells in the Museum were collected in the Philippines and a lot of them came from Panglao Island. Thus, some scientist considered the Panglao island has the biggest variety of shells in the South Pacific. 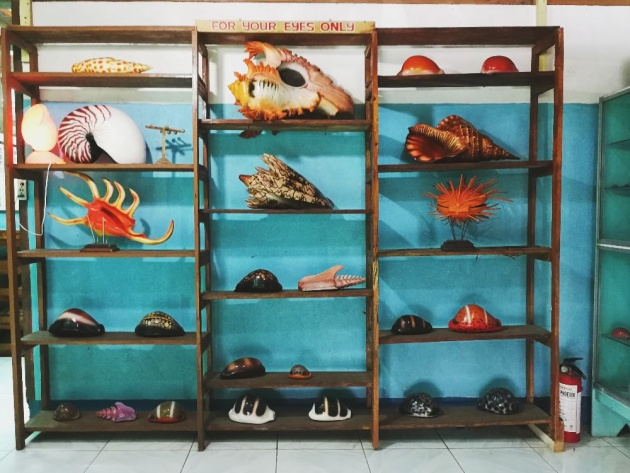 Among Mr. Hora's collections is the rarest shell named after Emperor Hirohito of Japan. It was found at the waters of Balicasag Island. It is very tiny that you have to use a microscope or magnifying lens to see its full beauty. From the tiniest, there are also three large shells displayed outside.

Because of his passion of collecting shells, Mr. Hora received the most-prized possession in which two shells were named after himself. First was the "Bursa Quirihorai" found in 1987 and the second, the "Primovula Horai" found in 1944. Both were found off the shore of Panglao Island.

The exit of this museum is the souvenir shop. It sells products made of shells and pearls like bracelets, necklace.

The San Augustin Church, or the Panglao Church, is the second oldest church in the island of Panglao. The church construction started in the year 1894 and was completed for almost 3 decades, 1920's. Panglao Church has murals in its ceiling depicting the sacraments. As you enter the church, you will notice that the ceiling is filled with a mural of Holy Trinity surrounded by eight divisions of angels. It also has twin antique confessionals carved with grapevine and dove patterns.

There are three carved retablos in the altar. One is at the central nave and has the icon of the patron saint, St. Augustin. The other two are at each arm of the transept, to the left is the niche for St. Joseph and to the right is the niche for the Blessed Virgin Mary. I wasn't able to capture the beauty of the altar since there was a mass at that moment.

At the back from the right side of the church, at some distance, stands a five-story bell tower built in 1851. The bell tower also served as a watchtower and is said to be one of the tallest bell towers in the country.

The Dauis Church, also known as Our Lady of Assumption Church, was founded by Father Diego de Ayala and Joseph Gregorio. It was in the year 1863 that the construction started and was conducted by Father Julio Saldana. It was then completed in the early 1920s.

The church is built in a mixture of styles, Byzantine and Romanesque Architecture. The interior, specifically the ceiling, are some impressive frescoes painted by Ray Francia in 1916. The murals on the ceiling, over the nave and aisles, bear no biblical scenes but rather the illusion of a Renaissance artesonado was preferred.

But the paintings beneath the choir loft bears the biblical scene. At the center is "Jesus Triumphant Entry into Jerusalem", on the left is St. Anne and the Child, Mary, and on the right is St. Joseph. On the ceiling above the altar are painted biblical scenes as well.

Upon entering the church, there are four massive posts supporting the portico, shouldering the choir loft. The ceiling is filled with some impressive frescoes painted in the year 1916. Dauis church consists of three retablos, one at the center and then two side altars. The niches are in neoclassical. The center altar is where the image of Our Lady of the Assumption stands in the form of a temple. Above is Child Jesus and the other one is of St. Jude.

The Bohol Bee Farm is a private resort and hotel known for its cultured bees and food products out of the honey extracted from the beehive. The bees are harmless wherein I was able to press my index finger into the hive not once but twice and the three of us were able to do that in a row. No bees stinging us with their sting because of that, though.

Before the tour happens, we decided to freshen up by eating their ice cream that offers you different flavors like Malunggay, Dragonfruit, Mango, Ginger and a lot more. For one scoop, it costs Php 75. Yes, it was really expensive that I chose carefully the flavors that will not disappoint me. Luckily, the dragonfruit ice cream is really delicious!

Aside from their ice cream, Bee Farm has its own restaurant that serves organic food from their organic farm. This was my second time in Bee Farm and on my first visit, I was able to eat a salad full of different kinds of flowers, maybe it's a flower salad. Honestly, it was weird but at the same time, delicious. I got to drink the deliciousness of lemongrass juice.

Besides the waiting area is their souvenir shop. It's like a mini grocery store where you can buy lotion, shampoo, perfume, foods, coffee, wine, bread and of course, souvenirs like bags. For foods and drinks, there's a free taste and with that, I tasted all bread and the different flavors of jam. I also tasted their wine and one of it was the Honeyed Bahalina. I really regret that I didn't buy it. It was really delicious like May Wine, well that was for me, but for my classmate Hazel, she said it was not that delicious and it's a strong wine. She suddenly got tipsy just by drinking one shot glass of Bahalina.

On the last note,

Bohol did a good job to help us forget the stressful things at work. From the countryside tour to the island hopping and lastly, to the cave swimming, church sight-seeing, Bohol is truly one of a kind. Three things that I'm so in love with are the waters and the creatures living in the waters, second is the lagoon in the cavern and the last one is the floating restaurant.

In this travel, I mentioned this in my previous two blogs that we availed a package from a travel agency. The advantage is the trip will be on a smooth sailing. However, when traveling in a group, it's much better to have DIY travel and just contact a rental car agency in Bohol. You will just tell to the driver your itinerary and then that's it, still a smooth sailing travel.

I visited Bohol twice already and I must say that Bohol still has more spots to offer, the religious and historical landmarks, caves, islands, farms and the adventure park/area. I will definitely go back to Bohol and this time, I'll be with my family. It needs major savings since Bohol is quite expensive, I must say.