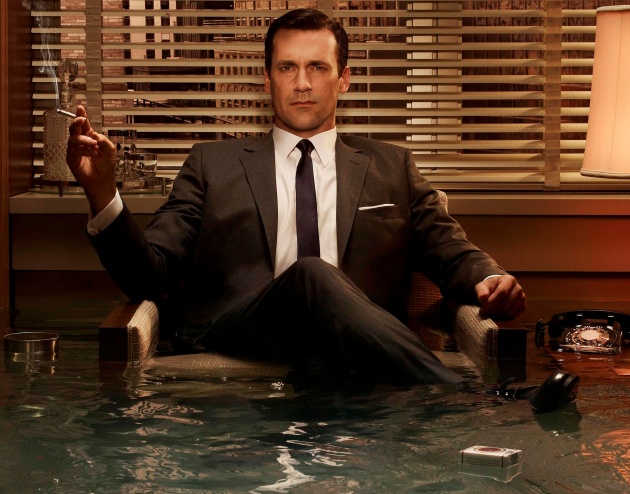 Mad Men has become vastly popular and is likely to remain so. The choice to do a piece set in such recent history has given AMC the chance to create a show that chronicles our shared American history as the background for its focus in the advertising industry. My BA in Business from Pepperdine informs me that most of what they talk about on the show is either verifiable fact or a very well crafted metaphor for the real history of that industry.

What I love most about Mad Men is that it is more about the women on the show than it is about the men.  The men are mostly predictable and equally disappointing; the women represent a cascade of empowerment that brings a deeper meaning to mainstream American storytelling. Peggy empowers Joan who empowers Dawn while Jane and Meagan don't wait around to ask questions but jump right in with their own mistakes and triumphs.

I also love how Don assists the revolution accidentally, opening the door for Peggy, closing the door to cigarettes, daring to defy the class system just under the surface of his high power position, while not really identifying with any of the tenets of the revolution directly. Now, he foreshadows the coming collisions of the 1970s and 80s as he attempts not only sobriety but transparency in his personal and professional life.  Would Don tell us all to 'Just Say No'? Would he ever hug a tree?

Finally, Roger Sterling holds great enigma as he is a male character that is overshadowed perpetually by a female character- his mother. Why is Roger an uncle, not a father, to his and Joan's child? Joan says its because Roger is a child himself, but Roger is no child. Roger is his mother, he is womanly, curious, generous, kind spirited, frivolous, and nurturing. Joan doesn't see Roger's value because Joan is sexist against women so she can't see the value of Roger's rich feminine side. Meanwhile, it is these same traits which make Roger Don's only real male connection, because Don really can't stand other men. These gender roles and questions being dealt with so sensitively by the writers are what keep the show engaging season after season.

The show begs the question: what is the line between boy and man? girl and woman? when is one playing around with what one might be and when is one making a decision about who one is? It's a beautiful show. I can't wait to see the next installment.

Its Facebook. No its Google. Its Yahoo I tell you. Thats how most discussions about the top website …