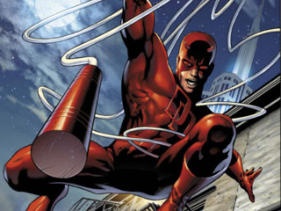 Marvel, in a joint press conference with New York Governor Andrew M. Cuomo announced today that their Netflix series — starting with "Daredevil," and continuing with "Luke Cage," "Jessica Jones" and "Iron Fist" before ending with a "Defenders" team-up event — will all film on the streets of New York City for the next few years.

Not a ton is known as of yet about the four series. "Cabin in the Woods" director Drew Goddard is taking the writing and directing reins on at least the pilot of "Daredevil." And "Twilight" writer Melissa Rosenberg, who has been working on "Jessica Jones" in various forms for Marvel for years will finally get the chance to bring her vision to fruition. But otherwise, that's all we knew... Until now.

Why is this location-based announcement exciting? Because Marvel Comics, and the characters being adapted for Netflix in particular, all got their start on the streets of New York. Unlike Marvel's DC Comics counterparts, Marvel set their superheroes in a simulacrum of the real world... And no location is more populated by their heroes than NYC.

Granted, many TV shows set in New York don't film in NYC, instead choosing to get selected exterior shots in the city while sticking to a soundstage in Los Angeles, or Vancouver for the majority of shooting. With these five series shooting in the city proper, not only will they have the authentic feel fans have been asking for but they'll also create a multitude of jobs for NYC residents. Specifically, according to Cuomo, $200 million in revenue and 400 full-time jobs over the next three years.

And that adds a timeline for the series. We know that "Daredevil" is first out of the gate, launching in Fall 2015. But assuming we start filming in 2015, that means we won't necessarily see a rapid rollout of the series one after the other, but rather sometime in the span of 2015-2018. Interestingly, that falls right around the same time that most pundits expect Marvel will drop "Avengers 3" in movie theaters, either 2018 or 2019; though the threequel doesn't have an announced date as of yet.

Still, that does bring up another reason for fans of Marvel movies to get excited about this announcement, and that reason is "Avengers." Though we don't expect that Tony Stark will be popping by and chatting with Daredevil on a regular basis, "Avengers" was based in New York, and that means these Netflix shows are all part of the tapestry of the rapidly expanding Marvel Cinematic Universe.

Meaning: Robert Downey Jr. might not stop in, but our heroes could still visit Stark Tower, or glimpse Iron Man flying over the skyline. And if our timing is right, could the Defenders show up in a sure-to-be-climactic "Avengers 3?"

Regardless, we'll know more about Marvel's Netflix plans soon, as filming will begin in New York City next year.