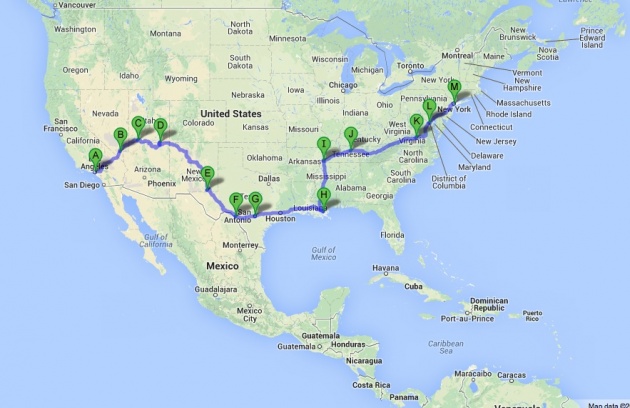 The first half of my trip- North America

North America, is a fascinating place for me. We've all seen hundreds of tv shows and films, set in America with an all American cast. I grew up watching Nickelodeon, and I think it shaped some of my beliefs and how I treat certain situations.

I even hear my Nephews at 12 years old using completely American phrases that they can only have picked up from American TV- even to the extent of talking about calling 911, instead of 999 as the emergency number! So having the chance to actually visit the places that I've seen so often was amazing. Comparing my perception with the reality was an exciting prospect.

The first stop on my trip was a little place called Las Vegas! I've seen it in tons of films, and on a particular episode of 'Friends' (I love that tv show a little too much) so without realising, I already had pre conceptions of the place.

Driving through Nevada, most of my fellow travellers were sleeping and nursing hang overs from the night before, but I was fascinated by the amount of, well, nothing! Driving through hundreds of miles of desert, with just cacti, sand and road. There just isn't that much space in England at all! 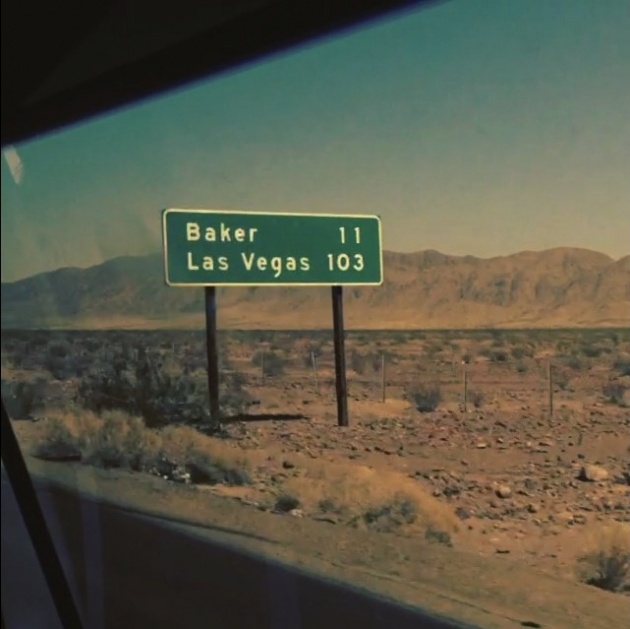 Arriving in Las Vegas and seeing the strip in the daylight, was pretty impressive, but slightly unrecognisable. It was heaving with tourists and the roads were completely packed with green cabs, taking people from casino to casino. Huge signs and slightly tacky advertisements were towering over us and guys dressed up like Alan from The Hangover and some Naked Elvis's with guitars keeping them slightly decent busked on the street for quarters... to be honest, I wasn't expecting to like Las Vegas that much from the start, so my expectations weren't too high.

Getting out there at night was a completely different story. Bright lights flashed from every corner of the strip, the tacky adverts seem to have blended into the background and now it all looked really grand and impressive. 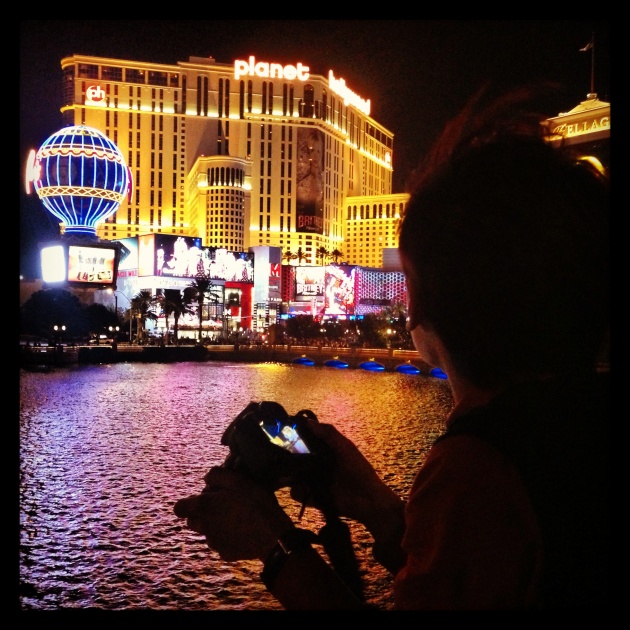 The atmosphere was excited and buzzing, people were dressed pretty amazingly and overall it was a pretty overwhelming yet exciting place to be. When we walked into the casino's- I assumed it would be full of desperate people who had lost all their money, drunk or drugged up and all feeling a little sorry for themselves. But I was totally wrong! There was such a mixture of people there. Sometimes you would feel like you shouldn't be any where near these people on such a small budget, and other people you would walk past and it would be like you're walking into their front room- looking incredibly comfortable in their shorts and drinking plenty of gin- a huge variety of characters just waiting to be watched by the likes of me! 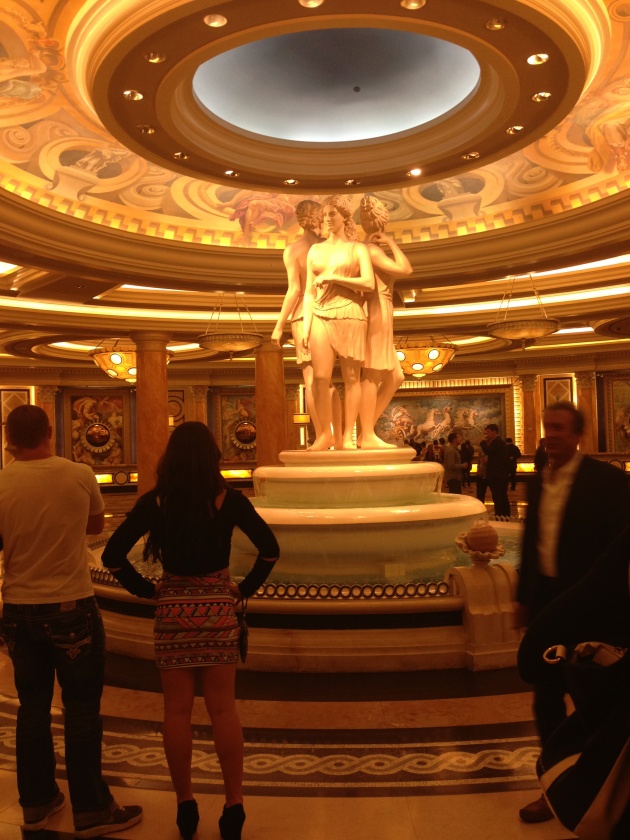 We walked into Ceasers Palace and were drawn to a certain table to spectate a guy rolling dice (Yes, just like Chandler in that episode of Friends) he was dressed pretty well, and seemed to be doing pretty well also. We watched for a while before he noticed us and started chatting to us... then flashed his $10,000 chip.

"What number shall I bet this chip on? If I win i'll buy you all a drink."

Myself and Jess were pretty shocked by this but Heather, who seems to be pretty comfortable around large sums of money as an accounts lawyer piped up.... "7!"

He rolled a 4 and a 3, and we all got our free drink as promised. His pure cockyness and indifference to that amount of money made me realise what Las Vegas was all about... Just going with it and having a good time. 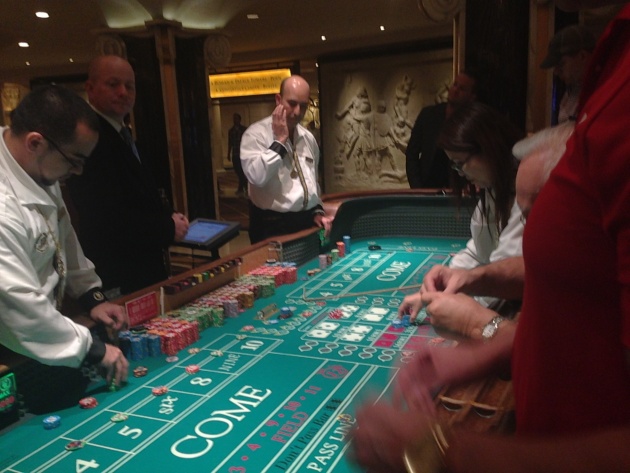 We stayed into the casinos just taking in the atmosphere until late into the night. There was such strong emotions felt in every corner of the room. Someone who had just lost everything, and in sheer despair on one table, and on the table next door, someone who had tripled their money and was holding more than they ever had in their entire lives- I don't think i've ever been anywhere with so many emotions intertangling. It made for a very interesting taxi que. 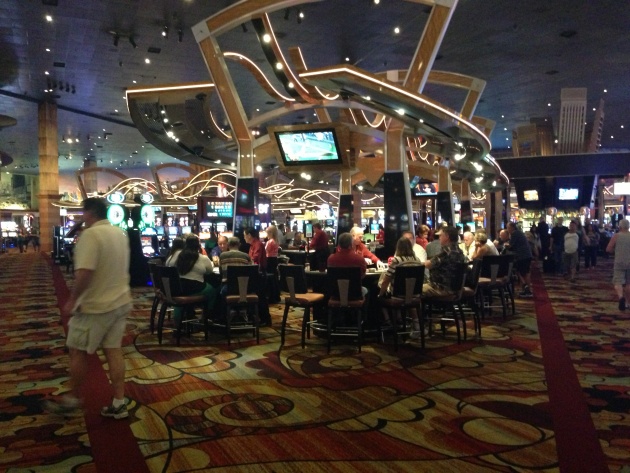 Las Vegas is a strange little tourist world in the middle of no where - 'What happens in Vegas, stays in Vegas', now makes perfect sense to me. People certainly go a little wild there, but it feels so cut off from the rest of the world that, it doesn't really feel real. It feels like a huge big adults playground, designed by adults, for adults! 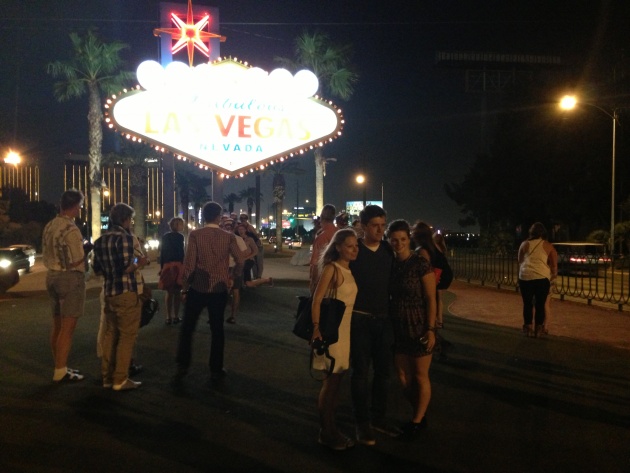