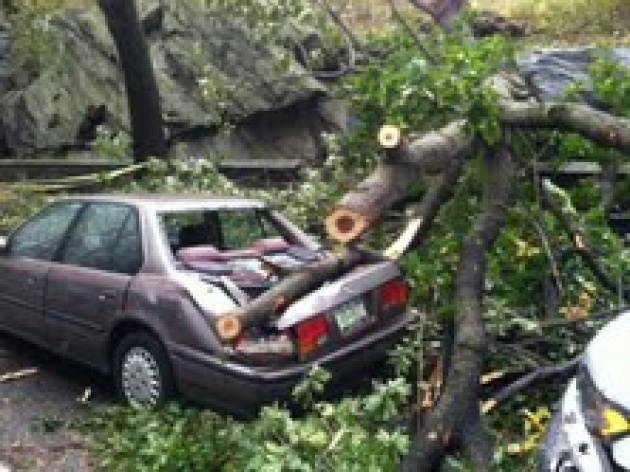 I almost feel ashamed by how lucky I am. Nearly three quarters of a million New Yorkers currently don't have have electricity. Some have lost their homes. At least 41 lost their lives. And here I am, in the comfort of my intact Upper West Side apartment, with power, hot water, food and drinking water readily available. I obviously feel blessed for my good fortune, but I can't help thinking about all the people - in New York and elsewhere - whose lives were affected by hurricane Sandy.

I think the city officials have done everything they could to prepare New York as well as possible for this natural disaster, but you really can't fully prepare for the unknown. This storm is probably the worst this city has ever seen, with one of the costliest death tolls due to natural disasters in New York City's history, the highest water surge ever recorded, and the worst damage to the subway system since it was first built in 1904.

I'm lucky to live in an area that is elevated from the water, in the safety of a five-story building that protected me from the worst. There were moments last night in which the shaking of my windows - directly facing Broadway - was starting to make me wonder if they would hold, but other than that, the storm passed smoothly. Incomprehensibly, Broadway was almost dry. Nevertheless, I couldn't stop watching on tv all the updates coming from the different neighborhoods of the city, following in real time the disastrous floodings that were unfolding in all zone A areas... those closer to the water and previously given instruction to evacuate. I felt blessed and guilty at the same time, for the furtune I was finding myself in. And I was frustrated there was nothing I could have done to help.
This morning I took a walk. Public transportation was still shut down, so I remained in my neighborhood. I went straight to Central Park to see with my eyes part of the devastation. As I wasn't allowed to enter the park - for my own safety - I kept strolling northbound along Central Park West. I saw parked cars smashed by fallen trees, apartment windows broken by snapped branches, bus station poles uprooted from the sidewalk, car pieces every now and then. But what hit me the most were the leaves... everywhere. Like a middle eastern rug covering the grounds with the colors of fall.
What I saw this morning was nothing compared to what many New Yorkers have experienced and continue to experience in other parts of the city. I hope they will be able to leave this behind as soon as possible. And I hope more will be done to better prepare this city for future events similar to this. Since the climate is changing, so should our focus and strategies to better protect the people who live by our coastal areas. Something needs to be done, and soon.
Giacomo Cresti