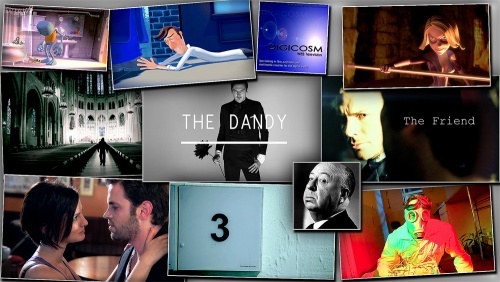 Happy belated Valentine's Day, everyone!
Perhaps we should have greeted you with a channel full of romantic comedies, epic love stories, and some melodramas, but you know... we're just not like that. We're a little bit more hardcore when it comes to movies, and that's why we selected our Alfred Hitchcock Web TV as the featured channel of the week. Re-discovering epic classics is always a pleasure, so why not start with The Man Who Knew Too Much and expand your knowledge of film history. Maybe, some day, someone will call you a film buff. Maybe they already do. And if you are a film buff, then hear this: Abel Ferrara shares great stories about Hitchcock at our studio. Who needs Hitchcock by Truffaut when you have Hitchcock by Ferrara?

And now, we're taking a step towards more contemporary stuff... Our featured filmmaker this week is Ben Warner, founder of Digicosm. Through his very own production house, Warner released several projects, including the self-funded Guardian, a supernatural web series. Digicosm is also the place to find interviews, culinary documentaries and an ongoing vodcast called FiST Chat. If you like filmmaking and new technologies, this is the weekly debate you need! Ben co-hosts it with film colleague Stephan Kern and discusses topics like 3D, how to film with an iPhone, and the latest Hollywood stories.

And this week's 'niners' are:
Drink Drunk by Leonardo Bonisolli
Bathe Time by Ashish Patel
The Friend by Ken Rivas
The Dandy by Tobias Knipf
Dieu Est Mort, Official Freeze Music Video by Harry Bozino
RoboCareer by Vancouver Film School
The Patroline Procedure by Tim Orchard
With No One In The World by Tal Haring
Hi I'm Carl by Jack Tew

Join the conversation on our Facebook page with filmmakers Tal Haring and Lisa Stock who put up a video for you to look at! And follow us also on Twitter for more news and short films.

15 the main methods of promotion

1. Site registration in search engines. This is the best known method of promotion of the website. I…

May the force be with you this Valentine Season

Any one else rushing around for last minute Valentine's? FREE printables on the blog today for all t…

This is my first blog here............So the valentine is coming so here the video for the bests gif…

Web TV Channels of Bitlanders (Introduction to All)

As we all know bitlanders is a social gaming where you are rewarded of your posting, sharing, connec…

If I Had That Woman in Front of Me, I Don& Know What

If I Had That Woman in Front of Me, I Don't Know What I'd Do': Neighbors Shocked by Death of Newborn…