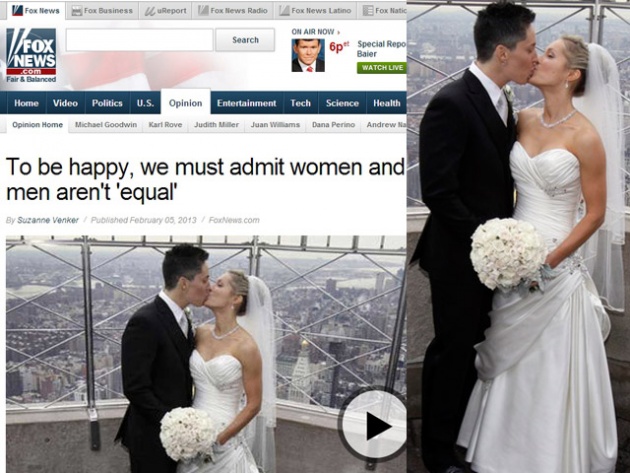 "Get in your late night terror sessions before bed."

"FOX News, a channel you can always depend on for nothing."

These are a few choice slogans I've drawn up for our friends FOX News. Seems perfectly appropriate with today's topic.

In a controversial article and interview, FOX News columnist Suzanne Venker discussed her views the importance of heterosexual marriage and how men and women are genetically different on their views of marriage.

In her interview with FOX News, Suzanne Venker (discussing the subject that brought on this whole discussion) says"Men think women aren't "women" anymore." In other words, women are so busy working they want to get married later, which is apparently bad.

Hold on a sec, lady, what men have you been asking? And who are you to tell me when and why I should get married.

Thanks for the stereotyping and sexism, lady.

But what killed Suzanne's article completely besides her anti-women views, was the use of an image of a lesbian couple being married on the Empire State Building. A big "Oops" on her part since she believed it was a heterosexual couple being wed, as a way to further affirm her view on marriage.

Ha, sucks to be you.

While we can all get our laughs in at yet another FOX News flub, thanks to inaccurate fact checking on the image they were using, it is also heartwarming to see a gay couple be legally wed on the Empire State Building.

It's a beautiful day for humanity.