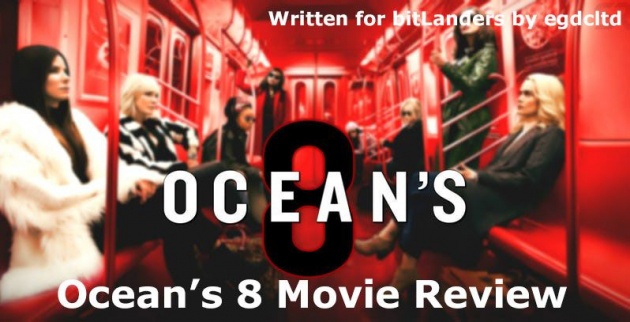 I've Changed. Really, I Have

Ocean's 8 (aka Ocean's Eight) starts with a woman, Debbie Ocean, sitting in front of an unseen parole board. She is trying for parole and making out that she is a changed woman; that she simply associated with the wrong person. The sole person of the board who speaks tells her that one of the terms of parole is that she has to avoid contact with anyone who has had a criminal conviction. Which, he points out, is most of her extended family. Including her late brother, Danny.

I would just want to hold down a job, make some friends, pay my bills.

Debbie sounds quite convincing as she claims that all she wants now is a simple life; to get a job, have friends and go for walks. Convincing enough that the parole board grants Debbie her parole - which she violates pretty thoroughly during the course of the film. The guard who gives Debbie her possessions back - which includes what looks like an evening dress - doesn't believe she is after a simple life. It sounds like the guard was involved in a number of scams that Debbie was running inside. As to why Debbie's lines were so good and so convincing - well, she had five years to come up with them. With $45 in her pocket, Debbie Ocean leaves Nichols Women's Prison - apparently enough to take her anywhere she wants.

Out of Jail, Already Breaking the Terms Of Her Parole

Where Debbie wants first is a high-end store called Bergdorf Goodman, where she picks up various perfumes and cosmetics. Not for anything as crude as shoplifting though; no, she takes the items to the salesgirl and tries to get a refund. Debbie has no receipt, so the person serving says she can't refund them - even if they are still in their original packaging. She is kind enough to give Debbie a bag to carry them out of the shop in. Now, that's a new one; try to get a refund for something you've just picked up off a shelf, then walk out of the shop with the items - with the store's help!

Debbie arrives at a hotel with a lot more bags, presumably from carrying out a bunch of similar scams. There, after eavesdropping on a couple who is checking out, she manages to scam their old room as well - picking up a coat and a suitcase on the way to the room. So far, Debbie has possibly only used enough money to get to Manhattan. $45 can indeed get you anywhere you want. 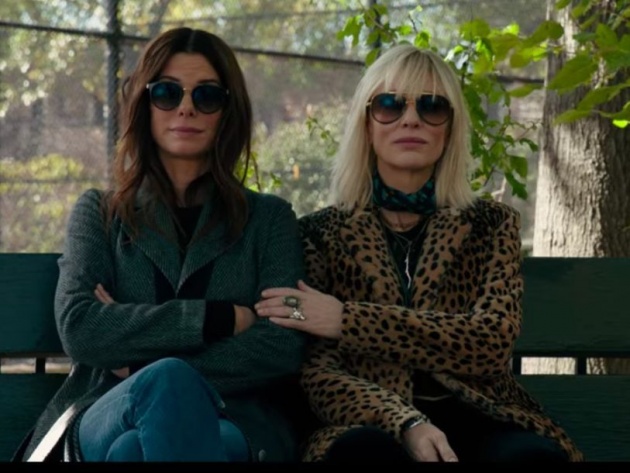 In what looks like the cellar of a club, a woman is overseeing her employees as they dilute down bottles of vodka with water. The reasoning behind this is that, to someone who is drunk, watered down vodka tastes like vodka (frankly, if the person is drunk enough, water will taste like vodka). This is presumably to boost her profits. When the woman, Lou, goes outside, she receives a text message - given that it's from JLBRD, this is probably from Debbie. Debbie wants to meet, but first she's going to the cemetery.

The Grave of Danny Ocean?

The cemetery is where Danny Ocean is buried. Or interred; buried doesn't seem quite the appropriate term when it's in a wall. Debbie is not exactly convinced that her brother is both dead and interred here. Whilst Debbie is there, Reuben (there were several other cameos that were cut) approaches her and tells her not to do whatever it is she has planned to do. Not that Reuben knows what it is, but he does know the family. Another place that Debbie pays a visit to is the Claude Becker Gallery; it looks like she might have a bit of a grudge against its owner, Claude Becker. Indeed she does, for reasons that are revealed later. 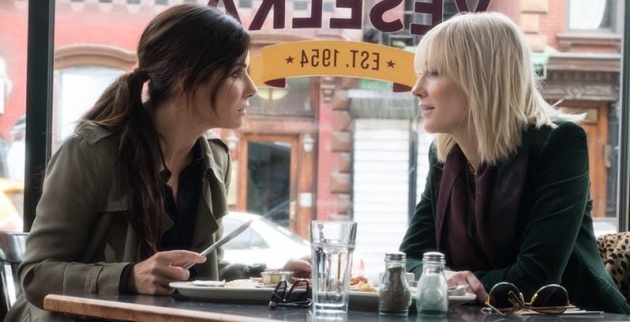 Lou is Debbie's former partner in crime, and Debbie has a new job in mind. First, she considered a bank job but rejected it. Then ten bank jobs, but decided that this was simply her anger speaking. Finally, she settled on a jewellery heist, for a specific piece of - rather valuable - jewellery. A piece of jewellery in a vault 50' below the ground. Lou thinks that this will take a dozen people; Debbie, having had 5 years, 8 months and 17 days to work out the plan, says it will cost $20K and require seven people. Because she isn't going to rob the vault - the owners will bring the jewellery to them.

The plan isn't to rob the vault, but rather the Metropolitan Museum of Art. More specifically, one of the guests at the annual Met Gala, actress Daphne Kluger. The jewellery is a massive Cartier diamond necklace called the Toussaint, which is worth $150 million and which Cartier keeps in their vault. First, a team needs assembling. 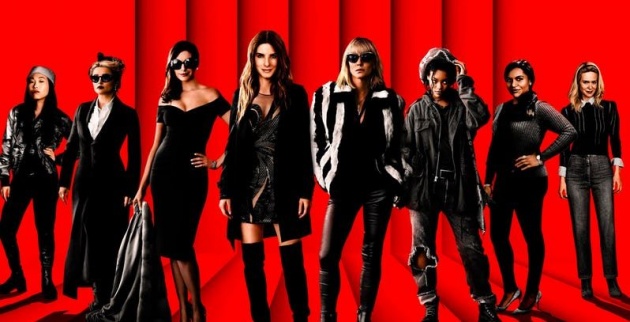 The first step is to get a designer. For the Toussaint to be brought out of the vault, there needs to be a reason to do so. This reason is to complement the outfit of Daphne Kluger. Said actress currently lacks an outfit, and therefore a designer, for the gala. So Debbie and Lou approach Rose Weil, a designer who was big in the Nineties but is now pretty much a has-been. After Rose's last fashion show no-one will back her (it was horrendous; even Rose realises that, and is sitting eating from a tub of Nutella when approached), she owes millions of dollars to the IRS and her assets and passport have been taken. Rose is what might be called motivated to make some easy money quickly - and individual shares of the job will be in the millions of dollars category. Of course, Daphne needs convincing to get Rose as her designer, so that is a small con to do. 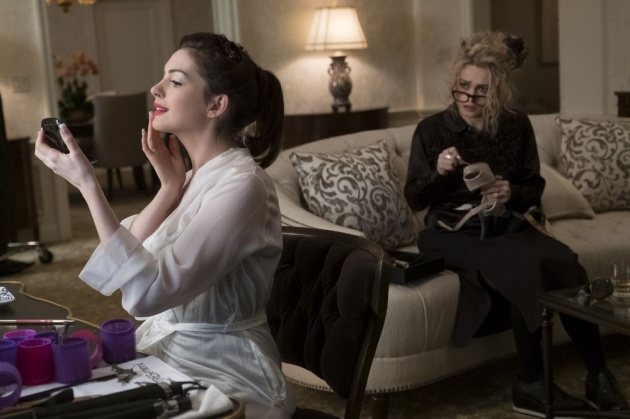 Sidebar: Who Is Number Eight?

Other team members are the hacker Nine Ball, street hustler and pickpocket Constance, Amita, a jewellery maker, who will turn the Touissant into something else, and Tammy, a suburban housewife and mother with a garage full of possibly stolen goods (her husband thinks she's big on eBay) and a history as a lorry jacker and fence. 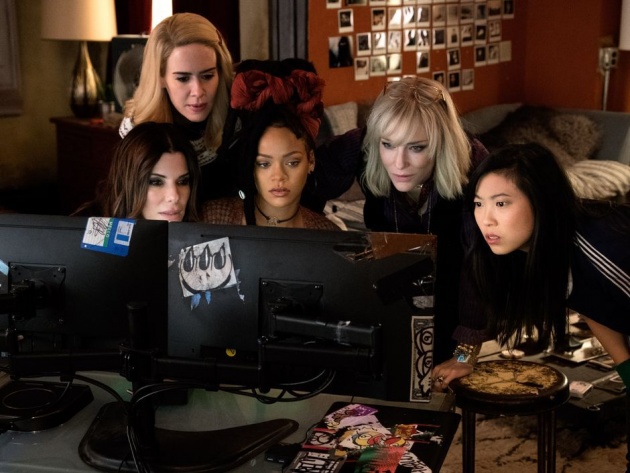 This only adds up to seven, which is how many Debbie said were needed to do the job, and, of course, the film is Ocean's 8. The poster shows eight women on it, one of them being Daphne Kluger, so it looks as if she's being included in the team, albeit unwittingly. 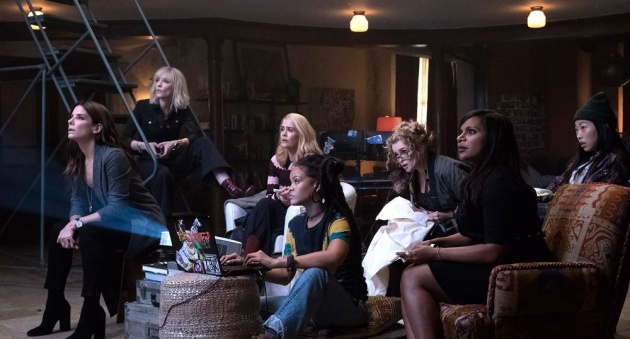 Now, once the team is assembled, the heist itself needs to be run. Cartier have to be convinced by Rose that Daphne Kluger must wear the $150 million Toussaint. They prove more than a little reluctant to do so; getting insurance on a piece of jewellery that expensive is tricky to say the least. Of course, Cartier are convinced or this would be a pretty short film, but they do provide some pretty serious private security to guard the necklace - and they stay pretty close to Daphne at all times. 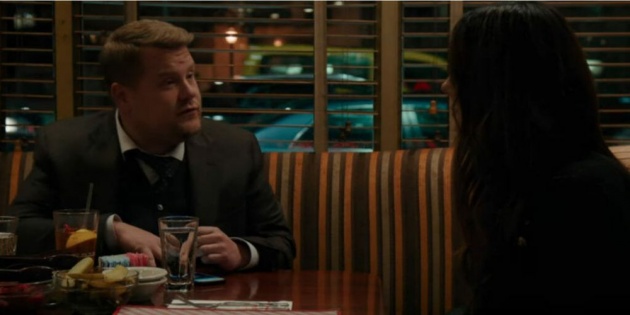 The heist is complicated, requires a lot of prep work, hacking, acquisition of specialised equipment, infiltration of various companies and a worrying degree of social engineering. Debbie also seems to be running another job inside the heist, which could complicate matters too. Lou, for one, is not that happy when she discovers this. Even once the heist is over, there is still more going on, as there were other plans running at the same time (this is where James Corden comes in). So there is still quite a bit of running time after the job is done.

Ocean's 8 reboots the franchise yet keeps continuity with the previous films, by keeping it within the family. Danny Ocean may be dead, but he may not be either - Debbie certainly isn't convinced that he is, and this uncertainty would provide a means to have him pop up in a later film, should any more be made (and should George Clooney actually wish to do so; he had indicated that he wanted to end the series on a high note). 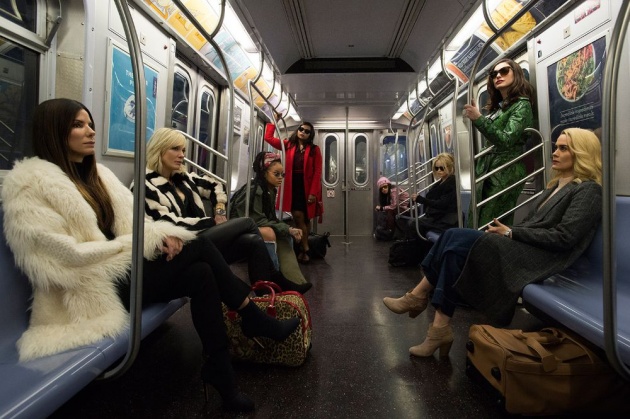 This is a decently executed film, even if it isn't an outstanding one. Having the crew of thieves being all-female - a deliberate choice on the part of the heist's planners; one prospective hacker was rejected as being too male - is a bit of a twist, even if not a huge one. That description stands for most of the twists in the film; they are decent twists, but not particularly huge ones.

Somewhere out there is an eight-year-old girl dreaming of being a criminal. Let’s do this for her.

Ocean's 8 is, as a result, a pretty standard heist film. It's a decent-enough heist film with a decent amount of humour (such as Debbie's comment about not doing the job for themselves, but for the 8 year old girl in her bedroom who dreams of growing up to become a criminal) and the cast meshes together pretty well. In fact, the best part of the film is probably how the characters do interact with each other. The film also looks pretty good - as, perhaps, a film that revolves around what is essentially one of the biggest fashion events of the year in a high-profile location should do. 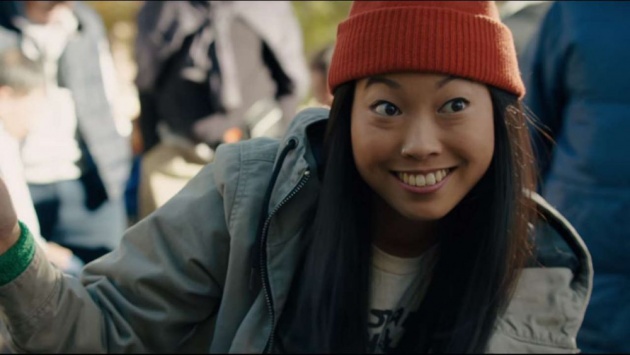 This is a decent film with a decent cast and it's decent enough to watch, but there is a feeling that it could have been more. Perhaps if there is a sequel - which is possible - the plot might be tightened up a bit. It would be nice to see the cast from Ocean's 8 appear in a better film that more fully makes use of their skills.

The Met Gala is a big event, and as such it is attended by a lot of celebrities in the real world. As a result, there are a lot of cameos of celebrities appearing as themselves at the fictional Gala.

All the Cameos - Warning, Spoilers!