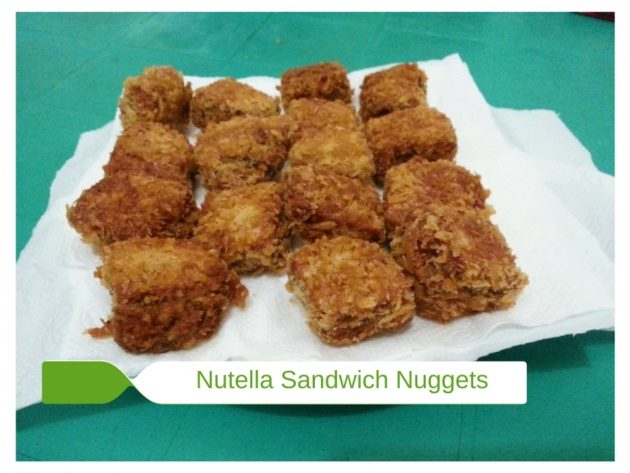 One late evening, after successfully coaxing the baby to sleep, I felt a rumble in my tummy. Gosh, I was so hungry. And as I rummaged through our pantry and fridge, I was only able to salvage a nearly (and about to expire) empty bottle of Nutella and 4 slices of Gardenia wheat bread. Needless to say, I didn't have the appetite to eat a boring ol' sandwich. That's why I rummaged even further until I unearthed flour, breadcrumbs, and a lone egg. An idea came to mind. What if I use the recipe for chicken nuggets but instead of chicken, I'm going to use Nutella sandwich cubes? 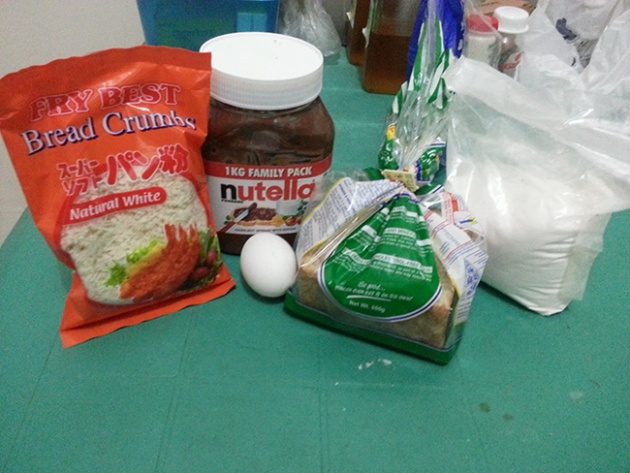 This means one thing. Experiment time!

But, first, let's explain what Nutella is in detail for the benefit of those who have been living under a rock and don't know what it is. 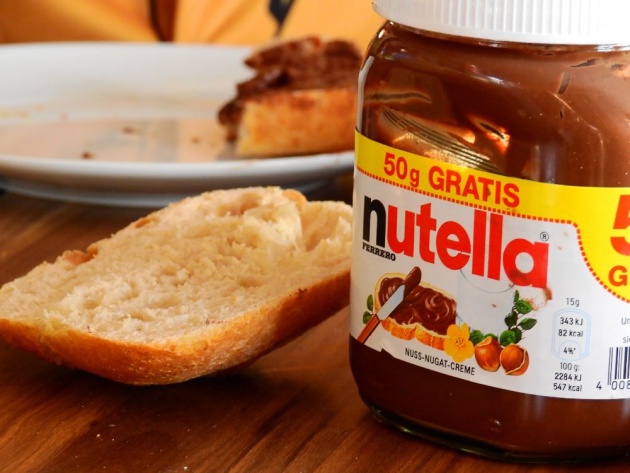 Nutella is a famous brand of sweetened ground hazelnut and cocoa spread. It is considered one of the most recognizable commercial foods in the entire world. In fact, it is the number one spread in Europe. But, where did it come from? How did it become the spread that we all know and love today?

The first appearance of the hazelnut cocoa spread can be dated as far back as 1806 during the height of the Napoleonic Wars. The French emperor's Continental Blockade cut all access to the Piedmont region of Italy which was the main producer of the finest chocolate in the world at that time. Consequently, the prices of cocoa skyrocketed because of this which is why the chocolatiers from the city of Turin started adding hazelnut to stretch out their low cocoa supply. This resulted in the product called gianduja. This concoction, while delicious, was not able to entirely replace chocolate. Once cocoa was accessible again after the war, people started going back to pure chocolate.

But, as they say.

The same thing basically happened again in the 1940s when cocoa was in low supply due to the World War II rationing. Pietro Ferrero, a pastry baker (and founder of the Ferrero Company) from Alba, Piedmont--an area widely known for its production of hazelnuts, decided to mix toasted hazelnuts, cocoa butter, and vegetable oils to cocoa in order to create a more economical version of a chocolate spread--and he called it "pasta gianduja" which was sold in solid blocks. This also helped extend their limited cocoa supply. It was an instant hit and he was able to sell 660 lbs by February 1946.

In 1949, Pietro Ferrero made some adjustments to his recipe to make the hazelnut cocoa spread creamier and more spreadable which he called "Supercrema Gianduja." This too was an instant hit.

In 1963, Pietro Ferrero's son Michelle Ferrero took over the company and revamped "Supercrema" with the intention of marketing it all over Europe. He modified the recipe and renamed it "Nutella." On April 20, 1964, the first jar of Nutella was produced in the city of Alba to be marketed outside of Italy--and the rest, as they say, was history.

And now that we've gotten that short history lesson out of the way, let's head on over to the Nutella sandwich nuggets recipe!

1. Flatten all the slices of bread with a rolling pin. If you don't have any rolling pin, you can use any glass with a smooth surface. You can remove the edges if you want but it's not necessary.

2. Spread a generous amount of the Nutella sandwich spread on one side of the flattened slices of bread. Stack them up on top of each other like you would do with a sandwich.

3. Cut the sandwich into cubes. I cut it in a 1x1 inch size but you can cut it any size you want. 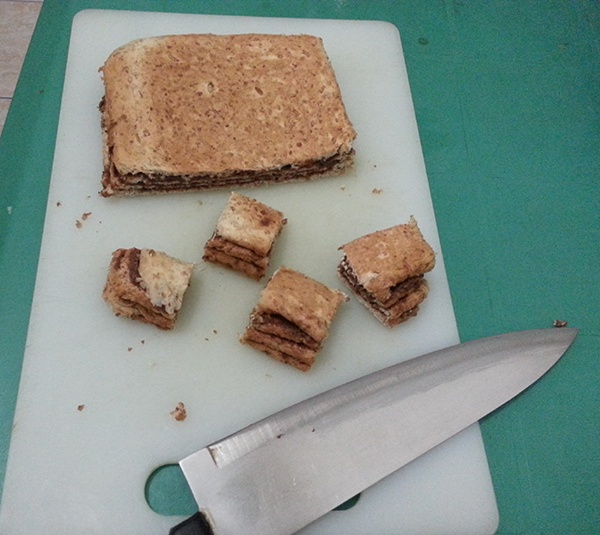 5. Dip and coat the sandwich nugget on the flour first. Make sure that each cube is thoroughly coated then dip them on the egg. Next, dip and thoroughly coat with breadcrumbs. Be extra careful while doing so that the layers of the sandwich cubes will not separate from each other. 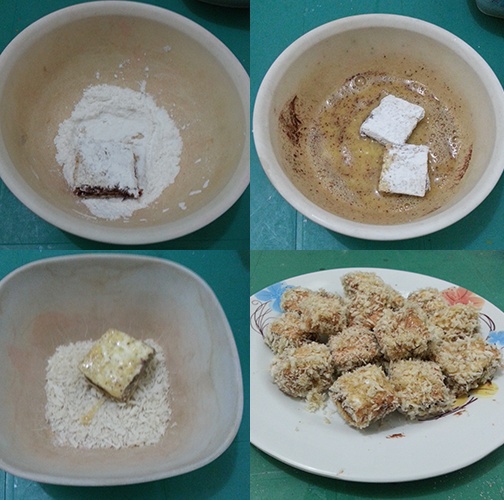 6. Heat vegetable oil in a pan on low to medium heat. Fry the sandwich nuggets until golden brown. 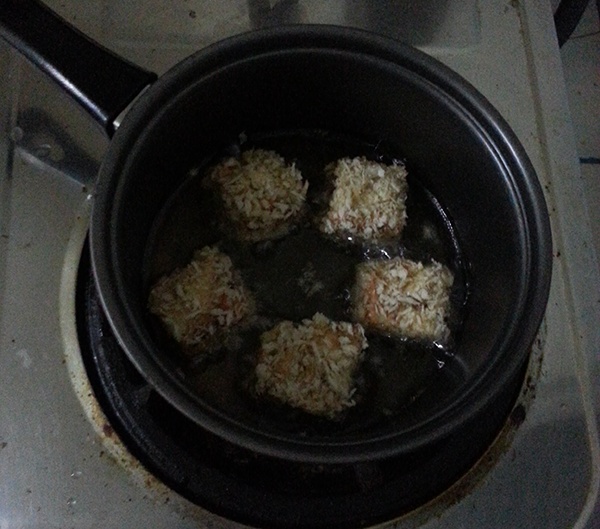 7. Remove the sandwich nuggets from the frying pan when they are already golden brown. Set aside on a plate lined with paper towel. Serve and enjoy! 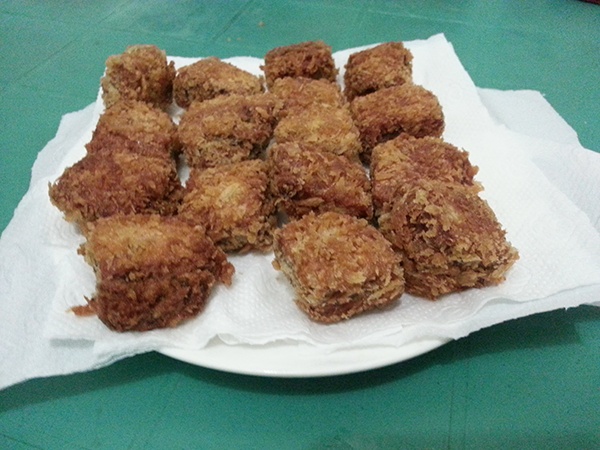 **Serving size: Good for 1 to 3 persons, depending on your appetite.

This is a fun and delicious snack that you can prepare in a jiffy. The kids and kids-at-heart will surely love it. It's so easy, anyone can do it even if you don't have any special culinary skills. To make it healthier, you can veganize it by making your own hazelnut spread and using whole wheat bread. You can also replace the vegetable oil with olive oil.

Before you go, here's a Querlo chat survey for you.

Other blog posts you may also find interesting:

Probiotics 101: Everything You Need to Know About Probiotics
16 Vegan Protein Substitutes
Intermittent Fasting: A Beginner's Guide
A Comprehensive Guide to Ketogenic Diet

Written by Chineyes for Bitlanders

Not yet on Bitlanders? Sign up now and be rewarded for sharing ideas, photos, and videos!

Image edited in Canva credits: Jean Beltran via bitLanders With my goal of sticking with wholesome f…

Do It Yourself, Organic Composting

Do It Yourself....Organic Composting More and more families have made the ecological decision to st…

How do I Know if My Silk is Organic? As silk is made by an organic process, the spinning of silk by …