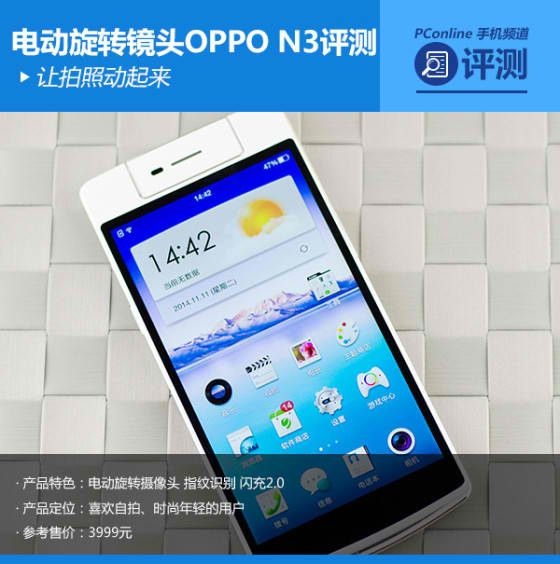 Last year OPPO surprised us with its release of the OPPO N1 which had a rotating camera. This year, on October 29, OPPO once again tried to surprise us with its newest phone, the OPPO N3, and it looks like they just did. Here, we will do a full review of OPPO’s latest release.

First, here are its specifications:

The most appealing thing about the OPPO N3 is its camera. Like the N1, the N3 sports a rotating camera, but this time it comes with a motor, the first cellphone in the industry to do so.   On top of it are also the receiver and a sensor. If you want to take a selfie, just turn the camera towards you with the motor.

The microphone and a speaker are also located at the hollow underside of the phone.

On the left side are the lock button and Micro SIM slot. There is also a nano SIM/memory card slot (up to 128GB) there. On the right side are the volume switch and a 3.5 earphone jack.

The phone’s charging port is also at the bottom. This phone has support for VOOC charging technology. The package also comes with a VOOC mini charger. This charger has received well-deserved praise and it was a good idea for OPPO to use it.

As for the camera, the OPPO N3 sports a 16mp motorized rotating camera with a 1/2.3-inch sensor. It also has an f2.2 aperture and dual-LED sensor. It can rotate 206 degrees which many users should be happy about.

Furthermore, the OPPO N1’s touch area was replaced with a fingerprint sensor which can be used to unlock the cellphone, encrypt files, etc. It can also be used to rotate the camera.

Although the OPPO N3 has a smaller display screen (5.5 inches) than the N1 (5.9 inches), it is still common among many phones and makes it easier to hold the phone. I would say it was a wise and reasonable decision for OPPO to do this. The N3 uses an LTPS display screen with a 1920 x 1080 resolution. It has a pixel density of 403ppi and a 1000:1 contrast ratio. You can see the quality of the screen in the shots below:

These images show how great the OPPO N3′s screen is. The colors and the pixelation are great. Users should not have any problem with it.

Even though the camera has a motor, you can also rotate it with your hand.

Next just move your finger on the screen to adjust the angle.

One thing that helps the OPPO N3’s camera is OPPO’s in-house image processor, the “Pure Image 2.0” which can adjust the lighting and coloring in every environment so that the camera can take the best pictures.

You can install different kinds of camera features

When you swipe your finger upwards in the camera screen, you can see all types of camera modes that you can download and use.

You can take shots in panorama mode by having the camera in a fixed position. That way, you can take panorama shots without your hand shaking.

For the best panorama shots, you can even put the camera on a tripod. Here are shots taken using the OPPO N3′s camera:

OPPO has done some upgrades for its new in-house operating system, the Color OS 2.0.1. This is based on the Android 4.4.4. Its tabs, interface, etc. have all been redesigned to look better than before.

At the launch, it was pointed out that you can use the O-Click accessory to take photos with the OPPO N3. The phone’s OS lets you synchronize it with the phone.

The OPPO N3 comes with a fingerprint sensor which is located at on the upper part of the phone’s back. It can be used to unlock the phone or encrypt files. It is also very simple to put your fingerprints into the phone. Just press your finger on the sensor and it will record your fingerprints.

At the launch, OPPO did not mention a lot of things about the OPPO N3’s hardware. After all, its biggest feature is its camera. Nevertheless, the OPPO N3 has the kind of hardware that you would expect from a flagship phone. It uses the Qualcomm Snapdragon 800 (MSM8974AA, 2.3GHz) quad-core processor. It also has the 450MHz Adreno 330 GPU, 2GB RAM, and 32GB ROM (which can be expanded to 128GB with a micro SD card). Here are the benchmark scores:

The OPPO N3, with its creatively designed motorized rotating camera and excellent appearance, has shown the best the cellphones today have to offer. It’s also one of the most expensive Chinese cellphones around. Still, considering its powerful specs, it should not be surprising that it is so expensive. Overall, it is an excellent phone that is worth considering.