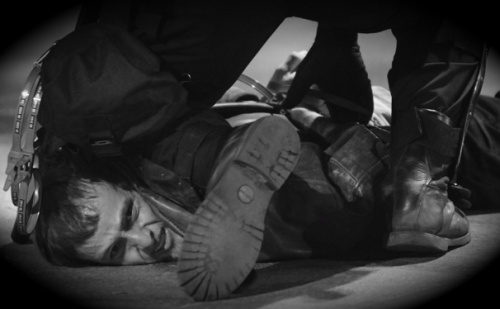 Occupy Wall Street has emerged as credible voice for the 99%. And now, it faces assault and tactics directed against it that remind of the union busting employed a century earlier. The OWS may not yet have achieved its goals of altering the political and socio-economic landscape in the US and globally, but it is perceived as a real challenge to establishment forces in part because it does reflect growing tangible concerns for a significant majority, and is able to draw upon a combination of old methodologies (protest and civil disobedience) and new means of communication (social media). OWS seeks fundamental structural changes along with immediate impact on the quality of life issues, dealing from employment to war. Union Busting Techniques from Busting Heads to Denigration: Busting heads, breaking up protests and encampments, infiltration and painting the reputation of the OWS as radical are all similar tactics employed against a fledgling union movement a century earlier. The unions back then were also painted as communists or un-American. Religion and ethnicity were projected as threats to the US, except back then it was the Catholics in general and Irish and Italian that were painted as of uncertain loyalty. Jews, African-Americans and Asian-Americans were certainly not projected any more favorably. Woodrow Wilson’s Administration rounded up tens of thousands Italian immigrants on vague charges of Anarchism and collective responsibility for a terror bomb set off on Wall Street, apparently in a parked horse cart. Coalminer's Daughter: Susan Sacirbey’s grandfather was Chief Aid to United Mine Worker’s Head John L. Lewis. John J. Mates came to US as an Irish infant and soon was working in the Pennsylvania coalmines. He self-educated and was soon leading organization efforts of the UMW. More than one occasion, he was confronted by the KKK in and out of uniform (police or sheets) trying to block efforts to organize the most marginalized labor and political group. Read our Blog for Video - “A Coalminer’s Daughter” - www.filmannex.com/posts/blog_show_post/a-tribute-to-my-mother-a-coal-miners-daughter-by-susan-sacirbey/27817 Not About Your Ride but Who Drives America's Politics: OWS faces similar challenges and charges from the establishment. I do not necessarily support all the demands/views of the OWS Movement. Of course, the OWS itself may be too broadly spread on causes and agendas. However, does not take a historian to see that wealth gap, inequality and concentration of political and economic power is at similar oppressive levels of a century earlier. This is not about who drives a Mercedes and who rides a bus – Rather it is about the dangers to a free, open, democratic and egalitarian society. The free market itself is at risk, and I tend to favor more of a capitalism than socialism model. (The financial/commodity markets have taken on more predatory character based on speculation/exploitation rather than behavior driven by market fundamentals). Patriotism with the Challenge to Establishment: What though is most disconcerting about the attack on OWS is how new Catholics like Newt Gingrich and Rick Santorum have now come to slander the OWS as un-American. Something is lost in translation between generations of immigrants and their grandchildren. The Police who would not have had the opportunity to organize before the labor movement and have the backing of the PBS, appear to have also lost their perspective. Now many take satisfaction at busting heads of these OWS ingrates, (as again evidenced by response to this weekend’s attack upon OWS protesters). Such head-busting is in large part rationalized by the charge that OWS is somehow un-patriotic and un-American. However, history tells us that America’s free and democratic society was most positively shaped by the labor movements. Patriotism, as our American Founding Fathers evidenced, was defined by activism against political and socio-economic repression. While the Founding Fathers all had their own visions of how to confront the establishment of their time, as did the labor movement a century later, the challenge and change is the responsibility as well as the right of leaders of a free society. Let's make certain the message is clear – OWS whether agree with all its agenda or not is more American than those who seek to slander or bust-it! See Our Previous Blog for Video Report – “Rackateering Against Occupy Wall Street” - www.filmannex.com/posts/blog_show_post/racketeering-against-occupy-wall-street-by-ambassador-mo/41795 ‘ See more at our Popular Video Blogs & Current News Event Articles at www.diplomaticallyincorrect.org By Ambassador Muhamed Sacirbey – Follow @MuhamedSacirbey Facebook = Become a Fan at “Diplomatically Incorrect” Twitter – Follow us at DiplomaticallyX