1: Many of us still call pencils of us lead pencils .But we are really badly out of date. Most people stopped using pencils filled with lead about four hundred years ago!

2: Lead is a soft, heavy metal. It makes a grey make if you rub it on a piece of paper. About the year 1300, men were using thin rods of lead for writing and drawing. These were the first pencils. You can see in some museums the beautiful pale – grey drawings that were made with these rods. They are called silver – point drawings.

3: It was in the time of Queen Elizabeth I that lead for pencils became out of date. Men digging at Borrow dale in the north of England had found a hard black stuff. It was easy to cut or saw and it made a thick black mark on paper. People soon learnt that it was much better for writing with than lead. 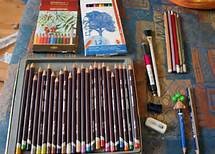 4: This black stuff was graphite. (You say this graff-ite) It has not been found at any other place in England. Soon it became very valuable. To keep the price high. The mines at Borrow dale were worked for only six weeks a year. When a wagon was loaded ready for the long journey to London, armed guards rode with it all the way.

5: In London the graphite was sawn into flat sheets. Then the sheets were cut into thin sticks with square edges. The sticks were cased in wood and so became pencils. They were still called lead pencils, even though they had no lead in them. The mark they made was very easy to smudge. You might find it hard to keep your books it you had to work with one of them.