I have been a fan of the Pokémon franchise my entire life. Pokémon blue version was my first video game ever and I have played every generation of Pokémon games since then. The games are generally based around going on an amazing adventure capturing, training, and battling Pokémon (short for the Japanese name "Pocket Monsters").

Growing up I loved every Pokémon game I had (with a little bit of distaste for Generation 4 but that's an entirely different article) and one generation I spent a exceptional amount of time on was generation 3, comprised of Ruby, Sapphire, and Emerald versions.

Around the same time that Ruby, Sapphire, and Emerald versions were released so were remakes of the first generation of Pokémon games, titled “Fire Red” and “Leaf Green” versions. That is when the trend of remaking games really began for the Pokémon franchise.

For years and years after I begged and wished for remakes of the second generations, consisting of Silver, Gold, and Crystal versions. I loved those games so much and they had some of my favorite Pokémon in it. Espeon, Slowking, Skipbloom, Politoed, Flaffy, Bellossom, and more! That’s where they were all from and I needed that generation to be playable on the new console, the Nintendo DS. Finally during the Pokémon franchise’s 4th generation I got my wish in the form of the “Heart Gold” and “Soul Silver” versions.

As much as I loved all of the other Pokémon games I always knew I needed more. I needed a remake of generation 3! I have to see Ruby, Sapphire, and Emerald on the 3DS. No, I am not the only person who begged for this. It was a pretty unanimous decision amongst Pokémon fans that this remake needs to happen.

Recently, Nintendo has been experiencing large losses financially as a result of poor sales. Last fall the company had a huge financial success in Pokémon’s sixth (6th) generation, Pokémon X and Y versions. The games launched exclusively on the Nintendo 3DS and 2DS. So the math adds up. Nintendo needs money and Pokémon makes them money, so it’s the perfect time to announce a new Pokémon game.

On May 7th, 2014 Nintendo made history by finally announcing Pokémon “Omega Ruby” and “Alpha Sapphire” versions. The games will be in full 3D just like Pokémon X and Y. These games are sure-fire moneymakers. Plenty of nostalgic gamers like me will definitely pick up the installment in the franchise as will many younger gamers who may have been introduced to the franchise fairly recently. 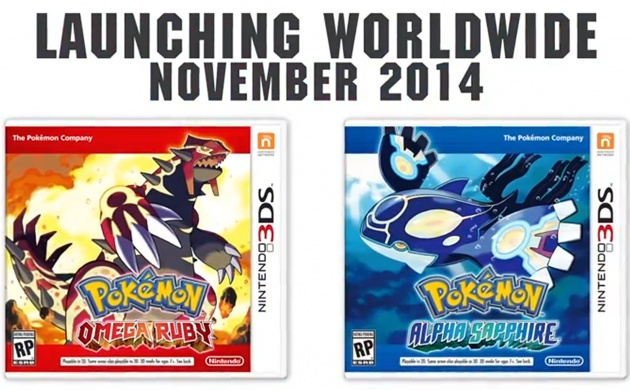 The announcement did not leave fans with much information other than that the game is coming this November and that it exists. It also includes the phrase “Explore A Dramatic New World!” This could be trailer jargon or perhaps this could be a sequel to the original Third (3rd) generation games similarly to how Black 2 and White 2 were sequels to The Black and White versions in the fifth (5th) generation. Either way I am crazy excited for these new games.

READER QUESTIONS: Will you be picking up these games in the fall? Which version will you be getting? Would you rather see a remake or a sequel?