The political system in Afghanistan is broken and shattered as the country is going in to the presidential election this year with multiple political and security challanges.The most important one is the transition of power from President Hamid karzai to another successfull candidate.Unfortunately the infighting between the political parties and factionalism ,the prospects of succeeding are very bleak. 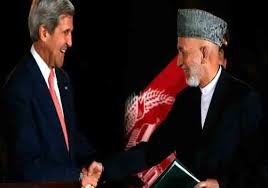 The 2014 election has started a new view of politics among the curious public and a vibrant,if not particularly well trained media.Karzai donot want another term in the office and he want a successfull candidate to work ahead.But we dont know ,if karzai will be having any role after the elections.His brother is a candidate for this year presidential elections and holding free and fair elections will be the top priorities and failure to organize free and fair election will further contribute to unrest in the country.The US and its European allies also want to hold free and fair election in Afghanistan and this is direct interference in Afghan political system with some embassies openly supporting some candidates.They should stay away from the internal political matter of Afghanistan.

The growing ethnic and personal differences are creating a divide among the Afghans.There are about 80 political parties in Afghanistan and the candidates are spread among the Political parties.The local warlords are having a great influence on the politcal system and proving to be the main strength of some of the political candidates.So the incentive for Afghan leader to come together and compromise.

The Loya Jirga failed to provide results regarding the bilateral security agreement.The afghans are split over signing the Agreement as some stating that this will be like handing over the country to the US and some stating to sign it as there will be an influx of the extremist factions.So the decision should be made according to the will of the Afghan nation.President karzai has refused to sign it as he stated the decision should be made by his successor after the presidential elections.The decision is right or wrong or its just a political game,we wont be able to understand the inside politics of Afghanistan.

A social worker by profession and graduated from Layas institute Melbourne,Australia