Preview: HOW TO TRAIN YOUR DRAGON 2: The Empire Strikes Back of animated sequels 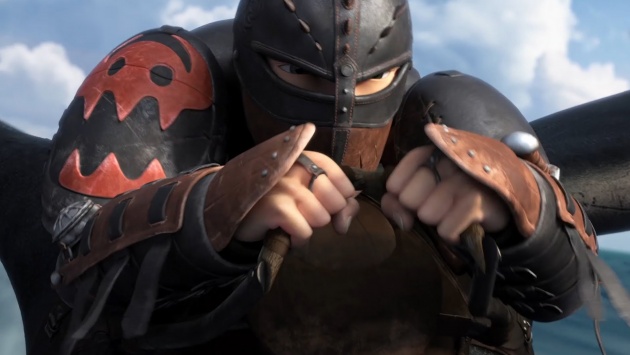 I remember when they didn’t make sequels to animated films. DUMBO, PINOCCHIO, even the ones with numbers in like SNOW WHITE AND THE SEVEN DWARVES; we were rightly spared movies that ‘continued the story.’ I for one don’t want to see BAMBI 2 when the deer is told, ‘your mother is alive.’ This is basically the premise of HOW TO TRAIN YOUR DRAGON 2, which really ought to take a leaf out of the HOW I MET YOUR MOTHER book. If there is a spin-off, change either the object or verb (HOW I MET YOUR BROTHER, HOW I DIVORCED YOUR MOTHER, HOW THE HECK DO I KNOW HOW THE DISHWASHER WORKS?)

On Friday 4 April, I was lucky enough to watch the first hour of the new Dreamworks Animated sequel and I have to say without succumbing to spoilers that it is funny, exciting, tense and emotional. Director Dean Deblois and producer Bonnie Arnold presented footage set to a temporary score that was basically 95% done – though you wouldn’t serve a chicken cooked to that ratio – and it was lapped up by the audience of bloggers, journalists and two children who skipped the last day of school – you’re ruining their future, people.

Deblois was on hand for a Q and A afterwards with the author of the books, Cressida Cowell. It is difficult to judge who was the most enthusiastic, Deblois who took a paternalistic pride in the baby-steps taken by his footage, Cowell who was bowled over by the flying sequences and ‘so many different dragons’ or the audience who after the footage suddenly ended collectively gasped ‘awww!’

A confession: HOW TO TRAIN YOUR DRAGON was released in 2010 when I all but stopped watching kids movies. My surly (then) pre-teen used to kick and scream when he was taken to children’s movies that I had to review: ‘why can’t I see them with real audiences?’ ‘What’, I replied, ‘the ones where the parents text all through the movie?’ Usually I had to trade: he would accompany me to TANGLED if he could watch THE GREEN HORNET afterwards. Anyway, it wasn’t much fun. How could anyone sit through THE GREEN HORNET? It’s not a teen comedy, an action film, even an inventive Michel Gondry movie. Whaaa - and other words missing the final letter!

However, I will probably go to see HOW TO TRAIN YOUR DRAGON 2 if they have screenings for unaccompanied adults – they have ‘mother and baby’ screenings, why not the reverse? Deblois described the template as THE EMPIRE STRIKES BACK which is to say, in the footage that we didn’t see, it gets very dark. If the template was THE JUNGLE BOOK 2, I’d be worried.

HOW TO TRAIN YOUR DRAGON is set on the island of Berk, as opposed to Berkshire, which actually exists and which, during the recent winter, was also surrounded by water – it was a ‘different sort of rain’ that caused rivers to burst their banks and households to be flooded. I still don’t know why that bulldog in the Churchill Insurance commercials is so happy. The hero is Hiccup (voiced by Jay Baruchel) a fifteen year old misfit taught to fear dragons who befriends one, a Black Fury named Toothless. Toothless loses a wing which Hiccup patches up; Hiccup helps save Berk and loses a leg. He also wins the love of Astrid (America Ferrera). As one eight year-old boy put it in an anecdote told by Deblois, ‘Hiccup loses a leg, but he gains so much more.’ That’s one astute eight year-old; I wonder if he’ll end up running a corporation.

The sequel is set five years on to reflect the four and a quarter years between the original and this one. Dragons and humans live in perfect harmony; the opening recalls another film franchise. Hiccup is now 20 and, according to Deblois, the local boy made good. He’s into mapping out distant lands and discovers that a bad guy, Drago Bloodfist (voiced by Djimon Hounsou) is raising a dragon army. Hiccup is convinced that he can reason with him (the film suggests a critique on the assumption that diplomacy can always work). Hiccup’s father, Stoic (Gerard Butler), who looks like a Scottish version of Obelix, but with a slightly bushier beard, wants to fortify the island.

A better title for this sequel might be HOW TO PROTECT YOUR DRAGON – after all the STAR WARS films never simply just stuck a number after the title. The release title doesn’t really correlate to the narrative. Suffice to say that after a number of twists and turns, Hiccup encounters his biological mother, voiced by Cate Blanchett.

‘We were really lucky to get her,’ mused Deblois. Blanchett manages a creditable Scottish accent and infuses the character with a believable sense of regret. They don’t give awards to vocal performances in animated movies, but on this evidence they should. She sings too!

The voice cast from the original return for this. Jonah Hill, Craig Ferguson and Kristen Wiig, whose character generated most of the laughs at the preview, reprise their characters and are joined by Kit Harrington from GAME OF THRONES; I feel sorry for him, not because he is lower down the bill but because he sounds like a character from DYNASTY.

You might expect the author to want to protect her literary franchise, in the manner of J K Rowling, especially as she describes them as autobiographical. (‘It’s a long story – Stoic is my father.’) ‘I didn’t wander around the production like a discontented ghost,’ Cowell confessed. ‘I didn’t write the books as screenplays for movies.’ She was happy that the filmmakers went ahead and did their thing, though for her what is particularly great about them are the flying sequences; she admitted that she always wanted to fly on the back of a dragon. (Don’t be silly, at thirty thousand feet you’d run out of oxygen; why is it that Lois Lane doesn’t die when Superman takes her far up in the sky. ‘Lois, you’re all blue and rigid like Kryptonite, I don’t understand.’)

Deblois didn’t want to make another random sequel; in fact DRAGON 2 is the middle film of a projected trilogy. If THE EMPIRE STRIKES BACK is the model for DRAGON 2, then I for one hope that RETURN OF THE KING is the model for the third instalment.

HOW TO TRAIN YOUR DRAGON 2 opens in the UK on July 11 2014; screening courtesy of 20th Century Fox and Dreamworks Animation. With thanks to Premier PR and Soho Hotel